Very recently I spotted some adorable tags over on a lovely friend's blog, made using the Penny Black 'Santa's Hat' stamp AND a matching die!

That was news to me - my stamp, as is my friend's, is wood mounted and the date on mine is 2012 - and I'm sure there certainly was no matching die back when I bought it a few years ago. In fact, I've subsequently seen matching dies for Snowy (another PB favourite) - and he's been around for many years!

Before I tried to get hold of a die (can't find them in the UK right now), my friend offered to lend me her own die to check it out just in case the size had changed - Penny Black sometimes do that when (for example) they add a much loved image into a polymer set. I was so glad of the offer, but said just a die cut would be good enough for me to check. By return of post, six plain die cuts arrived! And sure enough, they're the right size. And, being me, I decided to go ahead and make six little die cut images of course - waste not want not. Not as easy as you might think!

Here's the card and below the usual 'I used' blurb I've added a bit more about stamping onto blank dies using a wood mounted stamp - when you can't use the Misti of course, so you really are working 'blind'

So, I ended up with six of these: 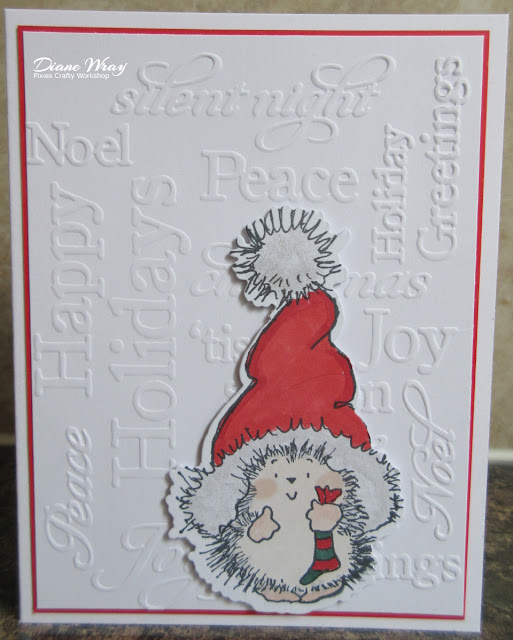 - details of how I got round the 'stamping blind' part are below, if you're interested as I already said

- added the hedgie to the card front, using thin sticky pads - and then just tickled the fur and pom pom on his hat with clear Wink of Stella

The fur and pom pom on his hat look a bit grey in the photo - that's the Wink of Stella for you - here's a closer look of the subtle shimmer. Coo, isn't a close-up unforgiving: 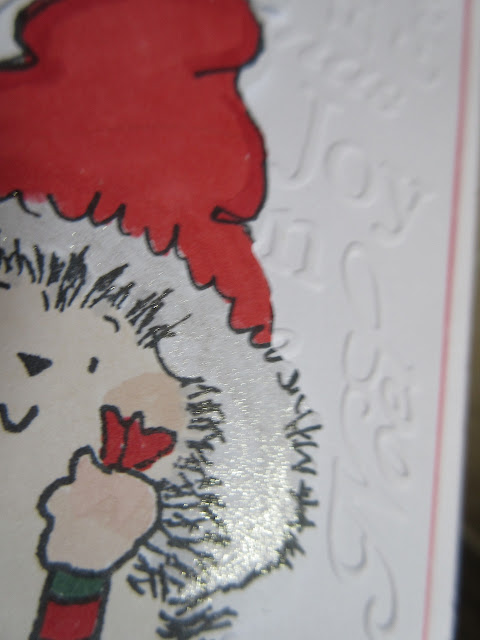 I had to really give some thought about stamping onto ready cut dies. It's not how I would normally work, even with clear polymer stamps I stamp first and then cut (although I know others might do it the other way around)  - and even then I die cut a template to make sure the die is placed perfectly evenly on the image.

However, it can be done with a whole lot bit of fiddling around - like this: 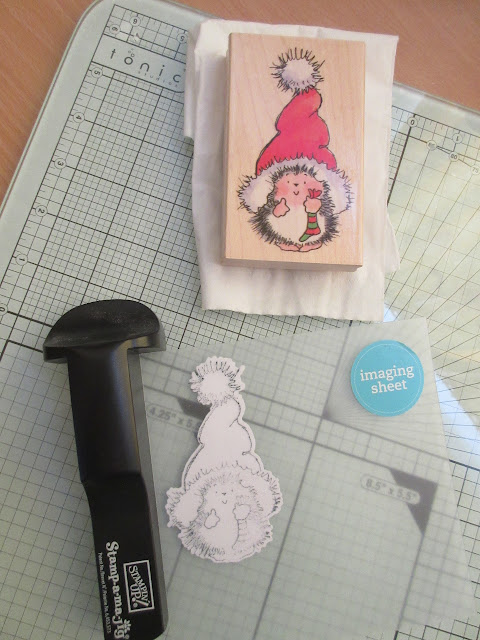 Out came my trusty Stampin' Up 'Stamp-a-ma-jig first of all and I stamped the hedgie as one would usually do, onto the acrylic sheet. I then took a die cut hedgie and adhered him to my glass work mat, using removable tape runner. That allowed me to maneuvre the image on the acrylic sheet in place over the plain die cut and butt the T-shape where I wanted to stamp. The photo above shows it all set up ready for me to remove the acrylic sheet and then do the actual stamping onto the die 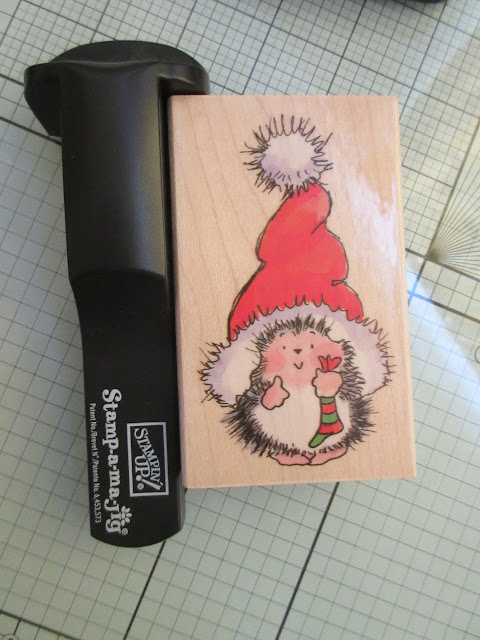 This is the hedgie being stamped, the die cut is hidden underneath. 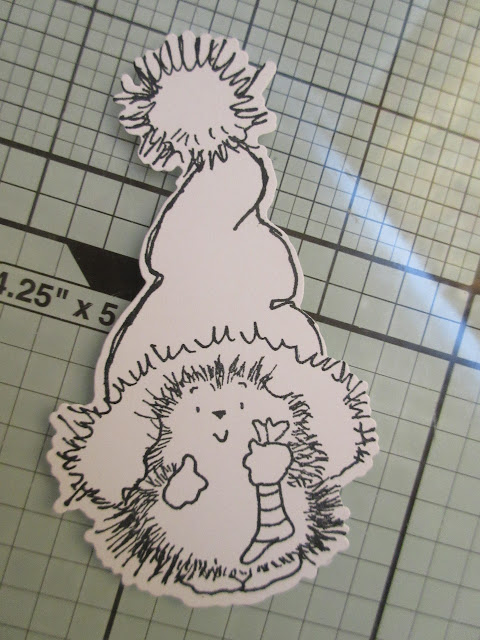 And out he pops, ready to be coloured - as good a stamping as I could get! I did discover one minor thing in this journey - apart from the fact that I really do need to see a shrink for attempting this one! When you use a Stamp-a-ma-jig in this way, it's impossible to line the stamp right into the side and top of the T part of the gadget. So, I moved the acrylic image which was placed over the die cut piece of card the tiniest fraction as I positioned it and the actual stamping compensated - if that make sense! Out of the six images, I had one that I'm really happy with in terms of equal borders, shown above - and of course that finished card I chose to take a photo of wasn't using the best placed image, but it's too late now anyhow 'cos it takes ages for me to take and then edit photos.

Would I do the same process again? I guess so but it was very fiddly and I truly believe that it's very hard to get the alignment absolutely spot-on, but a blind man on a galloping horse wouldn't notice - with luck! Meanwhile, the same lovely friend has sent me her die so I can now stamp a load of hedgies and then die cut them afterwards using a template to cope with my OCD - wahoo! The place will be awash with little prickly beasties :)

And, it's been far too long since I joined in with Crafty Hazelnut's Christmas Challenge (now on #397). So I'm remedying that right now - it's always anything goes but this week I also cover the optional extra of wet or dry embossing. Hazel is a real trouper for juggling so many balls with her challenges  - why not play along as well?