It's time for another instalment of Rudolph Days Challenge - run by Maureen - aka ScrappyMo HERE. The challenge runs every month from the 25th right to the last day of the month.

And, I'd like to join in with Hazel's Christmas Card Challenge #387 - HERE. Hazel is the sweetest lady ever and I feel really guilty that it's been an age since I played along. It's always anything goes nowadays and I used to play really regularly so am delighted to finally join in again! A new challenge each week as well as a lovely prize to be won. At one time entries were up in the hundreds and it would be fabulous if those of you making Christmas cards could link into Hazel's challenge and bring those numbers back up again.

My target of 12 Christmas cards per month was lagging very sadly behind and, in an effort to catch up, I made 12 cards exactly the same. I know, 12 identical ones is about the maximum 'batch bake' for me and I was secretly very glad when they were finished. Maybe I should have scanned a first coloured image - but then that would be cheating a bit .....IMHO. It all started when I found a background card in pale blue which I adore and needed to use (I have tons of it!). And so the card developed from there really. 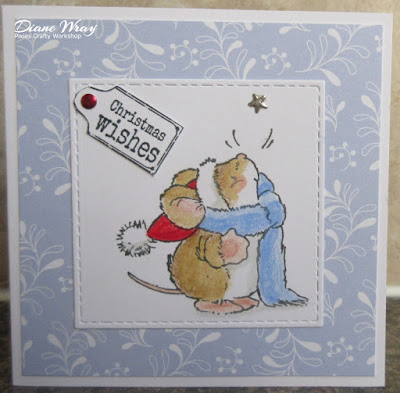 - a square of 'Merry Mistletoe' pale blue background card, made ages ago by Kanban and cut to just one eighth of an inch smaller all round than the card itself and then glued to the card front

- stamped the little image onto white card stock using a new 'Hybrid - Black Licorice' ink pad by MFT (more of this below). The stamp is a wood mounted pre-loved Penny Black one called 'Thinking of you' - dated 1999!

- next I stamped 12 little LOTV Christmas labels onto white card stock using a Memento 'Tuxedo Black' ink pad and fussy cut round them ( sorry, the stamps are no longer made by LOTV which is such a shame - it remains to be seen but am not sure that their decision to go all digital was a wise one. Again, only my opinion and it would be sad to see them fail in this new change of direction)

- glued the image panel(s) onto the background and sat and looked, feeling something wasn't quite right - it wasn't the lack of clear Wink of Stella as I just felt the image didn't need it so what was wrong?

- asked the opinion of my in-house critic, who had chosen the Christmas Wishes sentiment, and he said - 'he's just gazing up at nothing really'

- bingo! Of course he needed a star to wish upon and so I added a little Josy Rose star shaped silver nail head in what I thought was the little mouse's line of sight - times twelve of course!

Back to the MFT hybrid 'Black Licorice' ink pad. The idea is that it works with both water as well as alcohol based colouring mediums and I was really excited to think such a versatile ink pad was now on the market. I was on a 'wait list' for a while and only recently received the ink pad.

However, I have huge reservations and they are: the lid is almost impossible to remove whenever you want to use it (I needed the help of a blade of a pair of scissors each time), the ink pad is overly juicy and liable to 'spread' with too much pressure when you're stamping PLUS the quality of the pad itself isn't anything like as good as the likes of a Memento ink pad. I found there were stray fibres (NOT what you want when inking up an image) - to the extent that one long strand came loose and I peeled it right off one edge of the pad.

My advice is not to fall for the 'hype' and just stick to using two different pads depending on how you intend to colour images. I use Memento for alcohol inks and my Polychromos pencils - and Stazon (with or without embossing powder) for water colouring. We live and learn I guess!

A really adorable card, not sure I would have the patience to do 12 of them though! I got so excited when I first read about the hybrid ink pad - at the moment I have 6 black ink pads - full size and mini Versafine, Momento, a thicker embossing ink for less delicate and UTEE work, Stazon and an old dye ink one for the grandkids to use, and I was dreaming of replacing them all with just one.... until I read on. Perhaps I'll let them iron out the teething problems first!

AWWW! This is just DELIGHTFUL Di. Well done on the batch up catch up! I occasionally make a batch but probably wouldn't make 12 the same, for the same reason as you found!

So glad you persisted as this wee card is absolutely gorgeous Di and there will be 12 delighted recipients :-)
Blessings
Maxine

Hi Di, a fabulous batch bake of Christmas cards for your stash, love the little star you added for the mouse to look up at... have a wonderful week... Megan

This image is so cute Di, it would have been a shame if you hadn't batch made with it.

This is a gorgeous card with the cute image, love the blue card, so nice to see a 'true' blue rather than the turquoisey (not a word) shade which often passes for blue. Love your words of wisdom regarding the ink pads - I always think that something which claims to do more than one job often doesn't do either of them particularly well. I'm all for 'one man, one job' approach when it comes to equipment of any kind!!

I can see why you wanted that beautiful paper and your image goes with it beautifully - love the soft colours.
Thanks for the heads up about the ink pad - if I had been at full strength I know I would have been first in line but it has just been on the edge of my radar luckily.

Totally adorable Xmas card. Thanks for the advice on the ink pads too . . . always helpful to know. Sorry to hear the ink pad was disappointing after you had waited patiently for it too.

What a sweet card with that adorable mouse, and I love the blue background! Congrats on getting so many finished. Thanks too for the honest tip on the ink pad. I wasn't aware that one like that even existed, but I'm happy to know how it worked for you before I ran out and bought one!

Adorable card, Di. Thanks for the heads up on the ink too xoxo

What a sweet image,and totally love that background paper. Doing a batch of 12 would be my limit too, but it's such a cute design it's worthy of a dozen.

This is such a cute little mouse image Di and I love how you have coloured it, and the background paper is so pretty, and what a great idea to use the star shaped nail head as something for the mouse to gaze at. You did well to do 12 of these, and you have more patience than me as I don't double up at all, I think I should though when it comes to Christams cards it would definitely make sense. x

Spot on Val - wise words about the 'one man, one job' malarky. And like you, I do find it hard to find a really pretty true blue or even a pink without any hint of peach these days! To me, a real pink ought to be veering towards a slightly blue tinge. I think that's why I went wild over the lovely pink Altenew ink pad that Tara sent for the prize this fortnight :)

Such a cute little image for a Christmas card! I haven’t tried any of the inks that say they work for watercolor and alcohol markers. I see Gina K has one now too. Maybe I should try! Have a good day!

Versafine works great for regular stamping or watercoloring, so I haven't bought any others with those properties. Your card is absolutely darling & Len was so right--love the addition of the little star!

This card was definitely worth doing in multiples because it's so cheerful and sweet! Thanks for the review of the hybrid ink pad. I don't have any of this type and always wonder what makes them "better" than what I already have. I like to use my Versafine for most stamping, and my new Momento ink pad for everything else, including alcohol markers. Still learning what inks work with alcohol markers but the Memento pad has been great so far.

aww, this is so ADORABLE! i love that little guy and have to add him to my wish list. i also love the blue paper. i get tired of colouring 6 of the same image so you must have a lot of patience! i wonder if you let MFT know if they would replace your ink pad. i agree with the other commenters, i always use versafine for watercolouring, i just never heat emboss it. i have no patience for that either. :) thank you so much for sharing this sweet christmas card at the rudolph days challenge!
linda
DT rudolph days challenge

you are incredible, 12 cards, wow!! they are super cute and great colouring!
thank you about the review about the ink pads. I also use versafine for watercolouring and small memento tuxedo ink for stamping the sentiments, it is perfect for me because I am a bit clumsy with all these big ink pads, uf ... one of my crafty friends recently showed me altenew inks and they are also fantastic.
have a great weekend.
hugs xx

Ooh this is sooooo cute and the star is the perfect finishing touch - lovely colouring too. 12 more done, you are so good! I love those LOTV sentiments and really hope they bring back their stamps. I kick myself for not buying the ones you have and several other of the sentiments sets. I kept thinking that I would get them later when more able, then they were gone! Good review of the ink, thank you. Hugs xxxxxx

Love that classic PB image and you made him shine! Plus, the pale blue background is perfect!

its so very sweet!

So adorable!p, Di! Love it! xx