I don't seem to have enough time to join in with many challenges these days - the Playground takes up a lot of time, plus I generally only post twice a week on here. Often a challenge has passed by before I've even had a chance to think about it!

However, Mrs. A is celebrating her 100th Butterfly Challenge over the next four weeks and I couldn't let that pass by without playing along.

So here's my card: 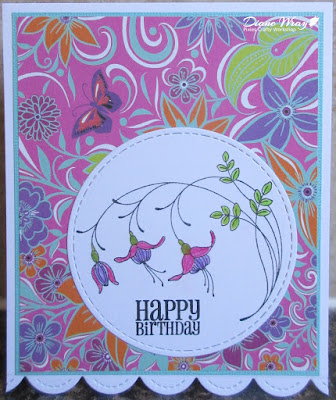 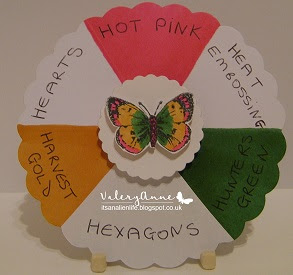 - whilst the image was still on a square of card I added the sentiment using the Misti (which likes things tucked into corners or along a straight edge even when using the magnets). The sentiment is from the Clearly Besotted 'Say what?' stamp set (love the selection in that set!) - stamped using Memento 'Tuxedo Black' ink of course

- then die cut the image using a die from The Works set of 'Stitched Circles' - to place the die I held it in place with the cutting side uppermost so I could see where the stitched lines would go, ran a soft pencil around the inside edge, flipped the die over and held it in position with removable sticky tape

- trimmed a piece of turquoise card, trimmed and glued onto the card front

- then trimmed a piece of patterned paper from the Kate Knight 'Totally Tropical' paper pad which was a magazine freebie way back in 2011! Trimming the paper was a bit heart stopping as I only had one sheet of patterned paper with a butterfly on - the butterfly is as far up and to the left as I could make it

Normally I centralise most image panels but needed to have that butterfly on show - it just wasn't in the right place on the paper no matter how much I jiggled it about - but my in-house critic likes it!

The backing paper reminds me of a dress I had - way back in the dim and distant past. If I say I used to wear it with white knee length boots that gives a bit of a clue about the era!

This card is for a very dear friend - Happy Birthday chick! Mine's a Bacardi and Coke with ice and lemon please :) Cheers! x

Oh so pretty, Di--perfect for a special friend!

So pretty and colourful: a great card!!
Lia xx

A lovely card and I remember having that paper too - was it really 2011!
Kath x

Lovely colourful butterfly card. The backing paper is certainly right out of the white knee-high boots era when there was quite a length of leg between dress and boots if I recall!! Those were the days.

I love the gorgeous colours on this card Di and the lovely stamp you've used too.

This is so bright and pretty Di and love your beautiful fuchsias and many congratulations to Mrs A on her 100th challenge too. I have that freebie paper pad too and it definitely has that 60's vibe...I can just see you in your white boots. x

So pretty Di is your card l love that backing paper which l'm sure l have of course it had to be pink and your fuchsias image is gorgeous too!

It's a nice card!
hugs

Very nice it is IRL too. Thankyou so much. I love fushias so they were a good choice to go with this design paper which I also have. Drinks cupboard got truly raided yesterday. Hugs Mrs A.

Thankyou for coming and spinning the butterfly wheel with me for this celebration challenge. Hugs Mrs A.

Fabulous card Di and the stamp does look super in the circle. Yes I remember that era very well and can say that I had a similar dress xx

It's an absolutely gorgeous card! Awesome backing paper and love the fuchsias. I bet you looked so cool in your dress and white boots! I would wear a dress with that fabric now - especially a long one - with matching lipstick of course! Hugs xxxxx