Needed a card in a rush for a chap the other day so out came the LOTV Art Pads for a quick rootle - and this was the result: 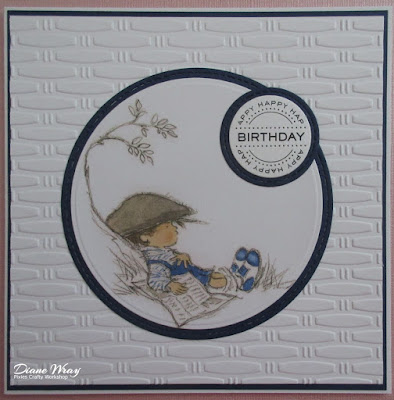 - dark blue snippet of card, trimmed to slightly smaller than the card front, glued in place

- image from the discontinued LOTV 'Vintage Boys' Art Pad, die cut using a Tonic Studio plain circle die - and I ran a ball ended embossing tool round the back of the die cut before removing it from the die, just to give it a bit of a border

- before I glued the dark blue piece of card to the card front, I'd gutted it by die cutting a circle using a 'Stitched Circle' die from a set by The Works

- the sentiment is by Craftwork Cards, already printed and die cut (told you I was in a hurry) - which I backed with a small stitched dark blue circle using another die from The Works set

- glued the sentiment partly onto the circle - finished!

This card is so like the fresh cards that Kath Buckle makes - here. I love her style and am really pleased how this turned out!

The stitched dies are brilliant - all thanks to my friend SaRn pointing us in the direction of The Works. At £6 per set of eight stitched dies you really can't go wrong - they also do a square set, err, which also happened to fall into my shopping basket (plus the same for the Playground toy box of course)! The stitching doesn't show up very well in the photo against the dark blue, but in real life it adds 'that certain something' to the card :) Thanks SaRn for being such a great enabler!