This is my quick card for today, very clean and simple: 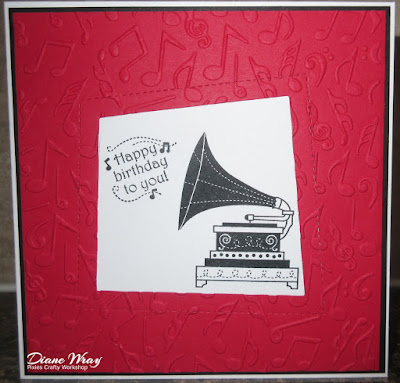 - a snippet of white card onto which I stamped the old fashioned gramophone and sentiment using Memento 'Tuxedo Black' ink and stamps from a 'pre-loved' SU 'Timeless Talk' set - gosh the Misti was so useful for the solid black stamping!

- then added a layer of black card to the card front, using Colall All Purpose glue, leaving a narrow white border all around

- next die cut an aperture for the image using the largest die from the MFT 'Peek-a-boo Wonky Windows' set of dies and a piece of red card from the snippets folder, which I'd trimmed down to just slightly smaller than the black layer of card

My card was made for my 'Uncle Frank's' recent Birthday, who along with his late wife Alice was my guardian when my parents left me at boarding school in Germany. This was so that, in case of emergency (medical or otherwise), they could step in and sign documents on behalf of my parents, who were back in the UK. No emails back then - in fact a telephone was a rarity!

It also meant that I could go and stay with them at half term and that's why I chose the stamps I used for the card - to remind Frank of something he did to amuse me all those years ago. Alice and Frank didn't have any children of their own so my 'long weekends' must have been a bit of a nightmare in some ways. Their music tastes for instance were sensible and I was your typical teenager of course! But, to entertain me, I clearly recall Frank playing some of his precious records at 45rpm instead of the old 33rpm - just so we could listen to what sounded like 'The Chipmunks' - or someone singing who'd been on laughing gas! Happy days! And we still laugh about it too :)