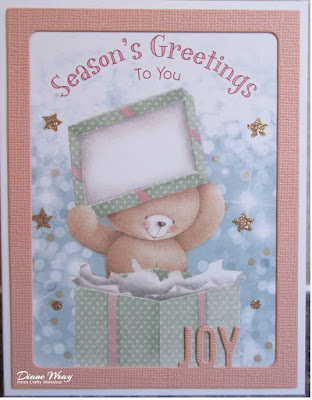 so cute, you are right, a heat wave makes it hard to think Christmas

Certainly has been a tad warm hasn't it Di, but you rose to the challenge and created a sweetie of a card.

Such a cute bear - lovely. So pleased it is cooler today!

This is absolutely gorgeous! Such a cute image and I love the frame. It's amazing how white card differs isn't it! Hugs xxxxx

A fantastic card Di, I love the frame around the bear. I'm so glad that it's cooled a little.

So beautiful Di and the image is just so cute!! the frame looks like linen card one of my favourite craft card to use....l love the colour too! hope you enjoy your weekend x

What a cute upcycled bear you have used Di and the pretty soft pink frame goes beautifully. x

Aww how cute is this? Totally ted-ily cute! Great piece of recycling there mate.

Really cute and loveable image, super card.
Well you can get back to Christmas as it has been cold and wet and miserable(that was me) all day here.

Another cute card, my friend! Adorable!

The apricot works perfectly with the image. I bet Parsnip now thinks this card is for him! Hugs Mrs A.

Great upcycling, Di. The image is so cute and looks fabulous framed in apricot. xx

Beautiful and sweet card, well done with your upcycling!

Fab upcycled card, your cardstock matches your image perfectly and I love that Joy die!

Gorgeous image Di and a pretty Christmas card. Thanks for sharing at Merry Monday this week.

Oh too cute--love this, Di!

This is adorable Di!