Lots of you will already know that Darnell wrote on her blog that she was having an operation last Tuesday. It's all gone well and she's no longer in fear of her 'baby basket' making a bid for freedom - as she so neatly described it!

As soon as I knew the date of her 'theatre appearance' I made Darnell a get well card and it has arrived in California already: 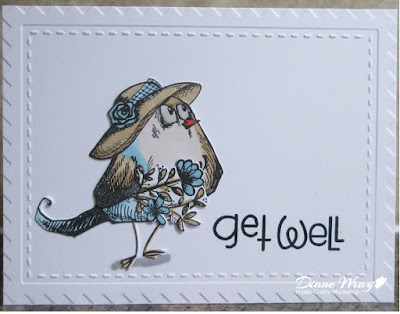 - a piece of white card stock, embossed using a Cuttlebug 'Pinking Stitch' folder and trimmed to the same size as the card front

- then I set to using the fabulous Tim Holtz 'Bird Crazy' stamp set as well as the Tim Holtz 'Crazy Things' stamp set. First I stamped the images I wanted onto the white snippet and then coloured them using Faber-Castell Polychromos pencils and Sansodor blending solution

- next I die cut the Crazy Bird using the matching thinlets die set, and fussy cut the 'Crazy Things' hat and bunch of flowers

- next I stamped 'Get Well' using the Misti, Memento 'Tuxedo Black ink and a stamp from the Paper Smooches 'Sentiment Sampler' set

- finally, when the card was ready to be put safely to one side, I added 'Glossy Accents' to the eyes

I do have to smile at the birdie (as they say) it almost seems to be looking up to check that nothing's gonna fall on its head from above! :)

Here's hoping that Darnell is soon back to her usual bouncy self!