Bet that's got you singing now :)

For ages I've wanted a rainbow die, but quite a lot of them are made up of only six 'stripes' - and I wanted the full 'Richard Of York Gave Battle In Vain' spectrum of colours!

But, I did recently find that MFT make one with seven stripes - and this is the card I made (I did two at once as there was quite a bit of fiddly die cutting so it made sense to double up): 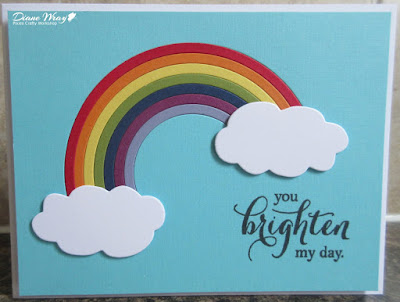 - snippet of turquoise blue card, trimmed to slightly smaller than the card front

- found snippets of all seven rainbow colours and ran them through the Cuttlebug using the rainbow die - making sure I kept the right pieces lined up in order on the desk!

- inserted the colours of the rainbow into the aperture on the blue panel, one at a time - it's easier to work from the inside out over when adding the strips

- used Memento 'Tuxedo Black' ink and a stamp from the Penny Black 'Special Thoughts' sentiments set to stamp 'you brighten my day' - using the Misti plus the L shape from the Misti Creative Corners set to 'push the card away' from the very edge of the Misti recess (makes such a difference and really an add-on worth buying!)

- then glued the blue panel to the card front, with a layer of white fun foam between to add dimension

- lastly, die cut a couple of clouds from snippets of white card (left over from chopping the card blanks down) - using MFT's 'Cloud Trio' die  and then stuck them in place using thin sticky pads

Tip, just to make the clouds look slightly different to one another, I flipped one the other way up (ie. top to bottom). Just a subtle change but it took away the 'samey, samey' look.

Edit: Liz left a comment on here, which prompted me to go and check out her blog here. And I found the lovely card she made which first piqued my interest in rainbow dies - back in 2014! Do go and see, it's really worth a look!