Mia, our little Grand daughter over in Germany, has just recently taken her first Holy Communion and I made her this card: 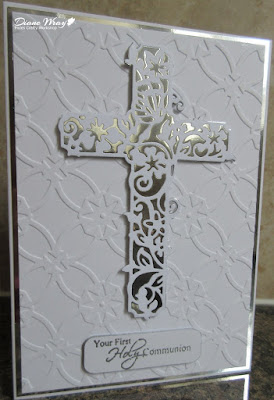 - a piece of white card stock, embossed using a Couture Creations 'Constellations' folder then trimmed down to a smidgen smaller than the silver layer and glued in place

- the cross itself was actually made first a couple of days before I made up the card - used white card stock, backed with Stick-It sheet and two Tonic dies from the Tonic Studios 'New Life Cross' set to die cut the filigree shape with a solid outline

- layered the white filigree onto the silver and then ran it through the Cuttlebug to make sure the Stick-It was thoroughly in contact. A surprise side effect was that it also produced a lovely effect effect of almost embossing the filigree into the silver layer

- then cut a further two solid crosses and added them to the back of the double layer front, just to made the whole thing more 'solid' and robust

- the sentiment was stamped using a VersaMark pad, sentiment from 'Stamping All Day' and then heat embossed using Stampendous 'Sterling Silver' EP

- to die cut the sentiment I ended up using a die from the DoCrafts 'Speech Bubbles' set, making a template first to ensure the die sat properly over the sentiment before I die cut it

I thought I had a 'dud' die as the centre wasn't cutting properly - but when I switched to 200gsm rather than 250gsm card it worked perfectly! That's made me wonder about some other intricate dies I had big problems with in the past, now I think about it - it was always when I was cutting using a particular white 250gsm card! I know that SU card is always trouble free and that's slightly lighter weight/thinner as well - I think a big penny just dropped here, oopsie!! It does only apply to quite intricate dies though, bigger outline dies do cut just fine using 250gsm.

The original intention was to add a few pearls to parts of the card and/or the cross but decided to call a halt rather than 'over egg the pudding'. Mia's name was on the printed insert I added, rather than the card front - again, to retain a more classic feel to the card.

Gosh it's taken me a good while to have the 'savvy' to run die cuts through the Cuttlebug again once they're fixed in place. The difference it makes is vast!

Tis beautiful Miss Di. Very elegant and classic. Hugs Mrs A.
p.s. I made the mistake of telling the doc you had a caddy too and his remark was 'I could bolt them together'. I told him to not even go there!! I spotted spectacle cleaner in his caddy today making it a total of 15.

What a fabulous card to celebrate Mia's first communion Di and this will be a keeper I'm sure. I love the filigree cross backed with the silver mirri card and the extra layers give it wonderful dimension, and the embossing in the background is really pretty, also the extra layers you have given the sentiment plate give it more substance too. x

Such an elegant card Di, great idea re the embossing, it looks really good

I'm sure Mia will treasure this lovely card. I imagine it would be difficult to buy a suitable card for the occasion.

I really MUST remember that top tip about running stuff back through the die cutting machine! It's a good'un.

I'm a big over egger (is that a word?) but I think you were quite right to stop. It's classic, it's elegant and its perfect! xx

How classy and elegant card for your Grand Daughter's Communion! Wow!! Great idea making a gold base for the cross and fab choice of ef!!
I too have problems with intricate dies and heavvy cardstock...!

Beautiful card. I love the mirror paper. The cross is very lovely. How please she'll be to open this up.

Beautiful card Di - very elegant. Glad you didn't over egg it! I'm sure she loved it!

Absolutely gorgeous, I hadn't seen that cross die before, but it's so pretty. I might *need* it now! Cara x

Absolutely beautiful card! I will keep your idea in mind regarding the weight of the paper and dies.

Stunning card, Di, I'm sure Mia was thrilled to receive it. Thanks for the tip about running the die cut through the die cutting machine again - I'm having a 'why didn't I think of that' moment. xx

Gorgeous! This is the nicest Holy Communion card I have seen! That is a beautiful and intricate cross. It is so perfect here.