One of our little neighbours is five years old later on  this week and Len came to the rescue again, when I was fretting over what on earth I should do for his card. He found a great little image on line (Luke is into his scooter, does try to skateboard and also likes Ninjas) - and this is what I made: 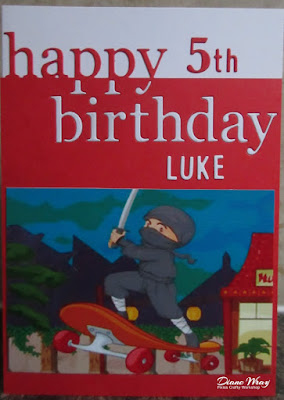 - filled in the white parts of the sentiment by die cutting more letters with the Memory Box die plus white card backed with Stick-It then inlaying them, it just gives a slightly more professional look (IMHO)

And that was it - done. Only took me about three hours, and I'm not kidding!

This is a great card for a jurned five year old. Such a cute image and will be well loved by the little fellow.

Hi Di, a great card for the little fellow, a team effort to create it too. love the clever placing of the ninja on the skateboard, you have both done a wonderful job fitting in his likes... have a great week... Megan

Will Len be doing a GD spot in the playground?

AWESOME! Looks like the perfect card for Luke! Len did a great job finding this fun image! xx

A great card and I'm sure Luke will love it. Well done to Len too!
Kath x

Brilliant personalisation. Hee hee . . . love that Alison C asked if Len would be doing a GD spot in the Playground! Still chuckling about that one!
Good on Len for helping you out.

Wait until you see the Valentine's Day card he made! X

Spot on!! Love the wording you have done!bet is will be thrilled with it...the little boy not Len of course!

Len did a great job of finding this fun image Di, and it goes beautifully framed with the red sentiment border die and one I'm sure little Luke will love. x

I think that's great that Len got involved. He picked a cute image and you did it proud. Using Luke's favorite things will make him so happy.

Sweet! I love how you added the paper crafting elements and personalized it. You and Len make a great team!

Oh wow!! Your young neighbour is going to love it so much!! Such a perfect tought card for him!! A lot of work, I think but the result is awsome!
Your hubby founded a perfect image and love how you mixed your dies to make the sentiment, great!!!

I love it - great card. I bet most of the time was taken sticking all those bits back in the die LOL!

What a great personalized card this is for your little neighbor! It's one to treasure for years to come, and it only took you 3 hours to create!? You're quicker than I am these days! LOL

You two make a great design team and Len really should be a GD. Grin
Hugs,
Em xoxox

Fabulous card, Di, I'm sure your little neighbour will be thrilled with his personalised card. Well done to Len too! xx

Such a cool card, Di I love how you personalized it! Len came up with a fab idea for this young man and I bet he loved it! I hear you on the 3 hrs - I'm a very slow crafter myself and I just keep fussing with everything. 3 hrs is good!

Len is the perfect man for the job! The card is so dang cute - love the little ninja. Hmm, since I haven't made cards in who knows how long, I imagine it would have taken me days to make this, especially with the detail.

Hope you and Len are doing fine. I'm keeping my fingers crossed that I can retire Friday, July 13, 2017!! My friend and I leave on a cruise the following day to New England and Canada!

Hugs to you both.
Kay

Len came to the rescue just fine and your card certainly has all the requirements. A super card. The twins were born on 2nd Feb. Not seen them yet or know their names but Norm hot footed it over there with his card toot sweet. Hugs Mrs A. email coming!

A supercard for a little boy. He will be glad!!
Lia xx

wow, so clever!
right now my kids are ninja fans, uf ...
have a great weekend!