A couple of challenges today

It seems like ages since I joined in with Less is More where the current challenge of 'New Beginnings' really appealed to me. So many 'new' themes to play with - in the end I went with 'new baby' and this is the card I made: 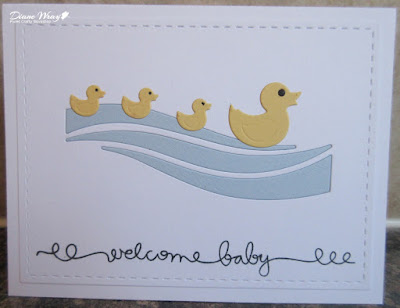 - using the Misti, I then stamped the sentiment using Memento 'Tuxedo Black' ink and a stamp from the Simon Says Stamps set called 'Handwritten Borders'. I had to mask off the right hand end of the sentiment area on the card so that it balanced out - it worked too!

- die cut the adorable little set of Mama duck plus her three offspring from a snippet of yellow card, backed with Stick-It double sided adhesive sheet and stuck them in place. The die set is NBUS and is a Joanne Sheen Signature set called 'Toy ducks'

My in-house critic pointed out that the little duckies might be good for Easter cards - there's a thought.

It's also Darnell's NBUS #9 Challenge right now - and it's a first outing for the little duck dies.

I could have wept as I originally made another card specifically for Darnell's challenge and then at the very last knockings realised that whereas it very carefully covered the optional parts (CASE and camouflage) I hadn't used anything new/unused (NBUS)! The air was just a little bit blue here :) You'll see the card at some point and then will know why I was so upset - one of my better efforts, ain't it always the way though.