It's time again for a new fortnightly challenge over at Cuttlebug Mania - and the theme this time is 'BBQ'! I expect this may well cause some wry smiles, certainly here in the UK - given the rain we've been having. In fact, Len said I needed to add raindrops to my DT card :)

You do have to use a manual die cutting/embossing machine for Cuttlebug Mania entries (it doesn't need to be a Cuttlebug but it must be manual, not electronic). And, you can't mix the two, it must be all manual please. Then make your entry, link into the challenge, link to the challenge in your own blog post and and make sure that you also say what products you used for any die cutting/embossing.

Details of our sponsor can be found over on the Cuttlebug Mania Challenge blog.

I dithered around for a while and even went so far as to purchase a digi for the princely sum of 99p (bargain!). But in the end I did a little search on the internet for 'punch art' ideas and then trawled right through my dies to see what I could fiddle round with and adapt to suit. This is the result: 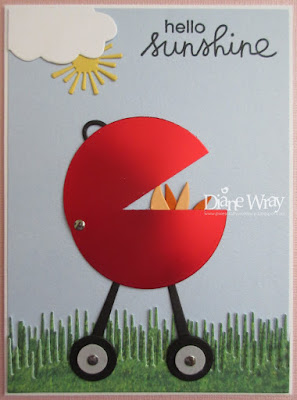 - slightly smaller snippet of plain pale blue card stock for the background, which I built up before finally adding it to the card front

- a total of seven dies and lots of snippets of card, as follows

- snippet of patterned green grass card, die cut using Marianne's 'Icicles' die (LR0135). Then layered strips of the positive and negative die cut one below the other right across the bottom of the image panel, with the icicles pointing upwards as grass

- snippet of black card from which I die cut the wheels (using my very smallest Spellbinders circles die) and the BBQ legs, using the trunk of a Memory Box 'Arboscello Tree', die cut twice

- snippets of two shades of orange card which I die cut using Penny Black's bow from the 'Whirl Wreath' set and I used the pieces which would normally be left over  to create the 'flames'. Then did a partial die cut from a teensy piece of black card for the BBQ lid's handle

- next, die cut the body of the BBQ, using a die approx. 6cm across, from the Tonic Studios Circle Layering set of dies and a snippet of Christmas (or BBQ!) red silk sheen mirri card - then using a trimmer sliced it in half

- die cut the sun from a snippet of yellow card, using a die from the Joy! Sun & Moon set

- now it was time to assemble the little scene and I glued the sun in place partially covered by the die cut cloud. One reason I'd not yet stuck the blue panel to the card front was 'cos I was sure the cloud and sun would be a bit of a squeeze alongside the sentiment so I just overlapped the cloud in the top left corner and trimmed it straight from behind with scissors

- next I stuck the BBQ legs where I wanted them to be and then added the wheels, topping the black circles with grey ones, punched using eyes from the SU 'Owl' punch :)

- before assembling the BBQ body I added the handle to the lid, and the flames to the bottom part, using red line tape on the back of the pieces - then just stuck the two parts in place on the blue layer

- almost there, final touch was three brushed pewter Josy Rose nail heads - one in the centre of each wheel and one on the lid 'join/hinge'

This really was huge fun to make, albeit a bit fiddly - as well as the time spent working out which dies to use.

If you decide to make something similar, or even very different, using dies - my biggest tip of all is to look closely at the areas which are not part of the design of the end cut result. Those pieces which you would normally discard after cutting. It's amazing how many useful little shapes can be found, for example I was spoilt for choice with options for the flames:)

We'd love to see you over at Cuttlebug Mania, it's a great theme with plenty of scope and the challenge runs for two weeks.