Butterfly Challenge #58 - Butterflies + D is for Dimension and/or Denim

Ooops, screeching into Mrs A's Butterfly Challenge at the last minute - as is often the case! Here's my 'Denim' plus (what I hope is enough) 'Dimension' butterfly card: 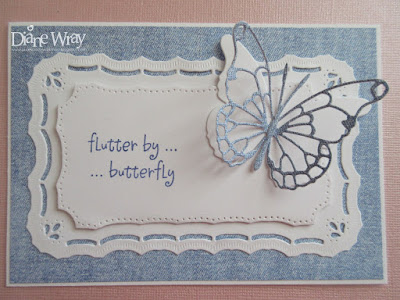 Beautiful card, Di. Love the die cut shapes and the gorgeous butterfly. I was reading through your instructions for using the Misti, but not having one, I was getting slightly confused. As I continued reading, I couldn't work out why you hadn't stamped the sentiment first, then die cut the shape so that the sentiment was in the right place.......then I got to your last sentence. LOL! xx

This is so beautiful Di with that pale blue denim coloured paper and then the Resplendent Rectangles and the pretty butterfly using the denim for the top layer works wonderfully, and that ink is the perfect complementary shade of blue... totally gorgeous!! x

So pretty Di. Isn't it great when we figure out a short cut AFTER struggling??!! :) You'll remember it for next time. xx

Hehe.... all through the Misti description I was thinking "Why didn't she just stamp before cutting?" then saw that you'd realised just the same thing! But your end result is gorgeous, so delicate and elegant
jane

That's pretty and made the deadline I imagine. Had to smile at your adventures with the Misti before you realised it could have had a simple solution - sort of thing I'd do!!

Hi Di,
what a very wonderful card for the butterfly challenge.
I love your design,and the wonderful stamped sentiment.
Such a very gorgeous butterfly also.
I see you had more luck with finding denim card or paper than I did.
Lots of crafty love. Jenny L.

Really lovely card Di. I have those Butterfly dies and even though I have other pretty butterfly dies, they are STILL amongst my faves.

Wow!! This is super-pretty!!Great interpretation of the Butterfly challenge theme and love the frames, it's a so elegant and feminine card!

This is gorgeous -- I love every single die you used on this. That paper really does look like worn denim, and I see dimension aplenty, so I think you're good there.

A beautiful card and well worth the fiddling!
Kath x

Lovely card, Di. I love the blue denim background. But couldn't you have avoided the plastic by securing the white die cut first and then lining the sentiment to that?
ps. Thank you for mentioning me in your last post as a first time playmate. This is a very close-knit group and I am enjoying reading your posts. I'm away for a bit, but I hope to play along when I get back. Thank you for sharing your instructions on making your cards.

Regardless of the procedure you chose, this turned out to be a stunning card! I love the fluttering butterfly and especially those beautiful blue colors!

Oh this is gorgeous, Di! I need to use those Spellbinders--clearly I have too much stuff as I've forgotten them! By the way, there's a free download at Sweet Petunia for a grid you can get printed on acetate to use for lining up sentiments. Basically works just like what you did, though. How fun you got to meet Darnell & wish I could have been there to meet you & others I "know" from the blog world!

We live and learn,(thankfully). It's a very pretty card, that butterfly is so delicate.

Ooooooooo I do like that spellbinders rectangle die. Looks lovely with the denim card and the butterfly. Thankyou for screeching into the challenge though your not quite the last one in. hugs Mrs A.

This is gorgeous Di and I Love the butterfly and the sentiment. Forget hindsight.... you did it the fun way xx

unfortunately not Trina as the stamp isn't clear so I couldn't see what I was trying to line up! It's red rubber.

Wow thanks Greta - that's so good to know. I just watched the video and will be using this if ever I'm stupid enough to try it another time :)

Beautiful card Di, I love the denim paper and the butterfly is so pretty.
Janice x

A really beautiful card Di. The denim paper is lovely and what gorgeous rectangle dies. Barbxx

This is such a delicate and oh so beautiful card Di! Seriously gorgeous one of my favourites from you. Just wanted to say thank you for the Pixie post - it arrived this morning and I managed to get DH to die cut some for me tonight so will be using them this week Karen xx

As my Dad always says, "hindsight is 20/20 vision". This worked out beautifully, love the sentiment. Cara x

I am so wanting to get a Misti...but am waiting till I take a trip into the States to purchase it there...then I can bring it across under my duty limits.

Your czrs is lovely...thanks for the Misti tip about the sentiment.

PS I saw that episode where they had the cricket game on Downton Abeey. It was a good one. How I miss that show!

wow - love this. still undecided about a Misti not sure I could work within the confines of the size of the cheaper (!?!) one.

What a wonderful card. I am loving this denim and butterfly combination. I recently pulled out some denim ribbon, never used before. I was dismayed at how thick and unwieldy it was, sort of like blue jeans.... well, duh! ;-)