'Jingle bells, jingle bells, jingle all the way - now it's less than a month until it's Christmas Day!' To be sung to the usual tune please - after me now :) I think a touch of hysteria is setting in here to be honest - tons still to do before Christmas but am sure we'll manage somehow!

Here's my snippets card for this week, which I'd like to enter into the current Penny Black Saturday Challenge, 'Dies and/or punches': 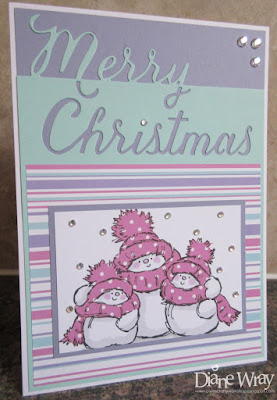 -snippet of SU's 'Pool Party' card stock, die cut at the top edge using a Memory Box die called 'Grand Merry Christmas Script' and then glued onto the card. This is a great die to have in addition to the plainer  one that many of us already have which is very similar. Important note, if you use this die - remember to salvage the inside of the loop at the bottom of the letter 'y' before discarding any waste from the die cut! I didn't and there was some frantic scrabbling round in the waste bin here - luckily it popped its head out of the bin and beckoned to me almost straight away:)

- next was a snippet of striped paper from Wild Rose Studio's 'Wintry Christmas' paper pack to pull the colours together, added to the bottom half to two thirds of the card front

- the image is one of the loveliest Penny Black Christmas stamps, called 'Snow Family'. It's been around since 2002, the year it was first released, mine is a pre-loved one which I bought last year - thinking it was no longer available. Got that wrong, it is still around to buy new if you look hard enough - ask me how I know :)

- final touches, a few little Aurora Borealis gems on the image, as the dot above the letter 'i' and three larger ones in the top right hand corner

Straight into this week's picks now: 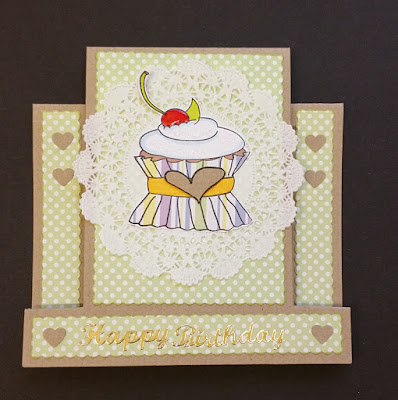 x
Barb made this great stepper card, using the Presscut dies set that quite a few of us fell in love with and rushed off to buy after seeing Liz using it! I also chose this card as combining the cupcake and the doily is such a fab idea - one I've never thought to do! 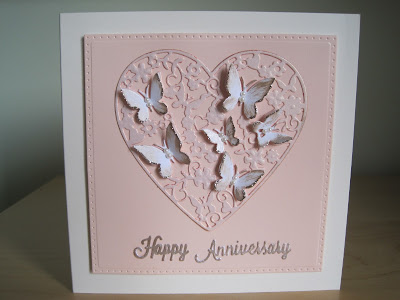 Isn't this a gorgeous Anniversary card? Made by Carole it's really elegant and I just love it! Maybe pink on pink could become the new white on white? :)

We had some banter going on during the week - Carole was going to audition for the role of Rudolph in the Nativity Play (some poetic licence I think 'cos am not sure that Rudolph actually did go to Bethlehem) - this was due to her having a really bad cold and the resulting dreaded red nose - and from my visits I know that many of you girlies have had colds and flu or worse this week. Come on - get well for Christmas please! SaRn cheekily suggested there might be a role for Rudolph the red toed reindeer played by yours truly! It's still a possible although each day sees a teeny bit of improvement! 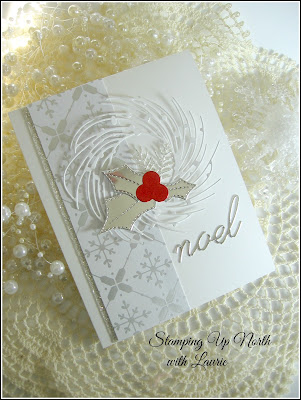 Oh. my. word! This was one of those cards during the week that just stopped me in my tracks - sheer elegance isn't it? Made by Laurie, who really knows how to nail perfection, and the gorgeous wreath die is a Penny Black one. Rare as hen's teeth in the UK - ask me how I know - so it's on my wish list for after Christmas, ready for next year! Edit: A lovely playmate tracked this down in the UK for me, Black Friday 20% off too :) Happy dance hobble here :)

I've included this card, made by Susan (rainy) not only because I love it loads - but also because of the fabulous idea Susan shows. How clever is that to take the matching die to a stamp, cut it and then split it in half and separate the two halves for massive impact? Great way to add such a different twist! 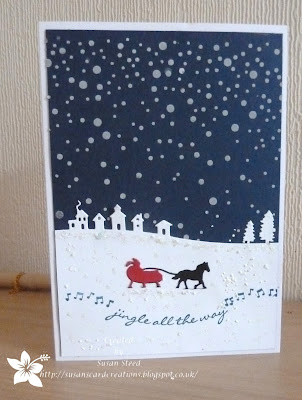 I never tire of this type of snow scene with the houses against the sky and hills in the foreground, made by Sue (Zouave). The sleigh adds a real pop and, the part that really tickles me, that curved sentiment stamping is brilliant! It follows the line of the foreground 'valley' and is a reminder to me that polymer stamps can often be curved for maximum impact. I can't work out if Sue has a curved layer of white card and the stamp follows that, or if it's stamped onto a flat piece - either way it certainly works brilliantly! Probably best to use a stamp positioner - firstly to check that the curve is right and also for the placement :) 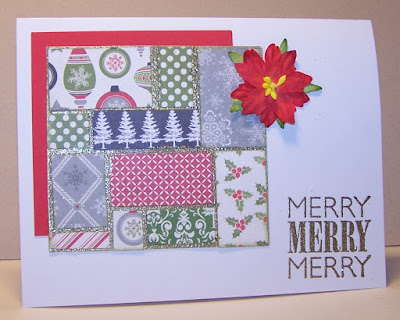 I thought it would be appropriate to bring us back to a great way to use up lots of little snippets - Sandy made this great patchwork card and I love it! Very cleverly, the 'patchwork pieces' were assembled onto adhesive paper leaving slight gaps for the sparkly glitter to be added. Clever touch! 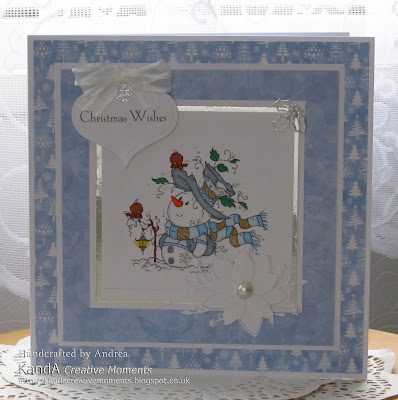 First of all, I adore this card made by Andrea (Kanda) - someone else who's been suffering this week. I wish I had shares in Kleenex right now! A darling image and of course the LOTV blue papers are just lovely with the white, silver and the poinsettia. But there's such a neat trick - I wonder whether you spotted it? It's the way that Andrea used a bauble die cut out and then stamped her sentiment onto it. I think it's a fabulous idea for Christmas cards, and one I wouldn't have thought of in a million years! 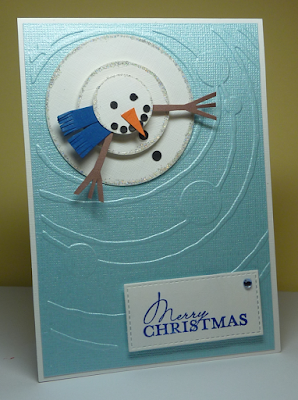 We just have to have this wonderful snowman for our final pick of the week! He was made, after a lot of angst (go read the post, it's really funny!) by Kim (Kimbo). I love the card design where the snowman is sitting in the middle of the swirl - and just adore him! Great use of snippets and would be a really fun card to make - and perhaps not too difficult, unless you lose the embossing folder plus one of the snowman's arms along the way of course :)

I do hope you've enjoyed seeing this week's picks - as always I ponder long and hard. Every single entry is worthy of being a pick, every week. I think I've said before that I make up a pretty long list of possibles during the week as I'm commenting and then have the hard job of paring it down to manageable numbers on Saturday mornings.

I do try very hard to make sure that I don't always pick the same playmates each week - although sometimes that's a really hard call of course. And, I look for inspiration, new and different ideas, how to use your goodies, techniques, tips - and of course ways to use up those snippets :) Oh, and of course cards and makes that just have that WOW factor. Every one of you has that!

We had one new playmate this week: 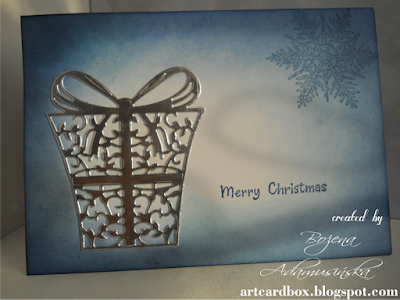 I've seen Bozena's lovely work around blogland and was so pleased to see her join us this week, bringing such a stylish card too.

Welcome to the Playground Bozena and hope to see you again soon!

And now it's time for the prize draw - the Penny Black 'Little Angel' stamp and/or the Lil' Inker's 'Instant Camera' die:

Hazel (Harris)
As you can see, Hazel squeezed into the Playground right at the end at around 10am yesterday morning - which proves that it's never too late to link up if the Playground is still open!

It's absolutely ages since Hazel last won in the Playground, around two years according to my little book, and it's really nice to see her winning as she puts so much time and effort into running a good few challenges herself. Well done! Hazel, I only have your previous address from your last win so can you please drop me an email (see the paragraph below) with your new one and the prize will be posted off to you ASAP this week.

After each post with my email in I was finding a real flood of spam emails (due to spam bots which trawl published blog posts looking for them). Thankfully blocked by my email provider but I still have to scan down them in case they were valid. Rather than do the 'at dot com' business - in future my email won't be within blog posts and it's now on the sidebar just above the Snippets Playground grab button! Always late to the party - that's me :)

We have another 'double' prize this week - I have a lot of Christmas goodies in the toy box and aim to use them up before the end of the Christmas/New Year festivities if possible: 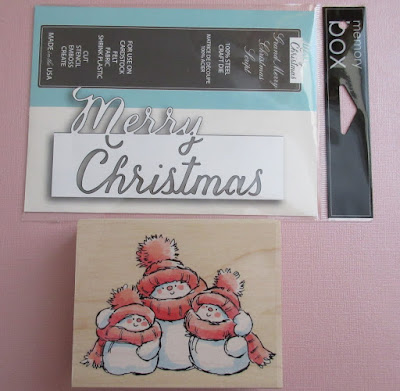 The Snippets Challenge will run for one week and the Playground gates will close at 11am UK time on Saturday 5th December. The gates will open again at midnight UK time on the same day.

Maximum of three entries and please say in a comment if you wish to play and be a possible winner of the prize. Do say if you only want one or other part of the prize (the stamp or the die) but both are up for grabs as one prize of course and will only be split if the first name out only wants one or other of the items, in which case I'll do a second draw for the other part of the prize. And please also link back to the Playground in your blog post to be eligible for the draw.

Have a good week!