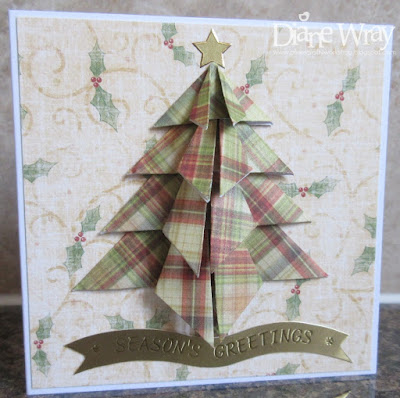 So very sorry to hear about your toe, Di! As if your back problems weren't enough! I wish you a speedy recovery and may the painkillers work quickly!
Your card is fabulous!

Sorry to hear about the toe Di, that sounds horrendous. I had gout once and the pain was definitely 12 out of 10, I thought my foot was broken. Between me and my GP, we managed to work out that I have a "trigger food", in my case prawns which I'd eaten on 3 days in a row before the attack. Now I only have them a couple of times a year, as a treat, and I've never had another attack thank goodness.
Jane

Oh dear me DI, so sorry you are still suffering, poor you.

I know Statins can cause lots of, problems and hubby battled with the doctors for month until they eventually changed him to something else - reason for not doing so readily, statins are much cheaper, of course they are, silly us. I tried the same but merely got, well you will have pain anyhow from MS so we can't blame the statins, so on them I stay.

But even if you are struggling to find a comfy spot you have still come up with a splendid Christmas card.

Take care and rest when you can.

Wonderful card Di love the tartan paper it looks so christmassy. Sorry to read that you may have gout hope you have anti-inflammatory medication and that the pain and swelling settle soon,

LOVE your tartan folded Christmas tree card Di. Between you and Carol, you've persuaded me I need to have a go at this too. Thanks for the link.

Sending lots of get well wishes your way mate.

Lovely card Di! but sorry to hear you are in agony with your foot and hope it settles soon....I look forward to your company on the bench in the play ground though!! lol ....don't forget the sweeties!...on second thoughts maybe not...off to the dentist today! Chin up , foot up......wishing you well.xx

Oh my goodness, gout is the worst! I do hope you can find some relief, Di. Love the look of this great trees. I was thinking they would look great on place cards for a holiday meal, also!

First get wel wishes !
Your folded card is great !

Sorry you are in agony with this gout problem Di and hope it is soon better. I do remember my dad having this flare up now and again and him hopping two foot in the air if anything got anywhere near it. Your plaid origami Christmas tree is a beauty too. x

Oh my Di, this looks fabulous such a clever design.
Hugs, Veerle

A fabulous card Di - I saw a similar card in a magazine last year and saved the instructions, but have yet to make it!
Hope your foot is soon feeling better.
Take care, Kath x

Oh Dear!! I hope that is going to improve very soon. I can imagine the pain!

Love your tree card Di. Sorry to hear about the toe and hope it is starting to mend now. x

I love your tartan tree Di, and the pretty backing paper.
So sorry you are suffering with gout, I hope your medication brings some rapid relief.
Jean x

Oh poor you, I have heard that gout is super painful ... hope you feel better soon.
Fab card, love the dimension on your tree :)

You have done very busy with this tree, but the result is just wonderful, Di!
I'm so sorry you are suffering, I wish you a very quick resolution of your healt!

Blooming heck, who's going to light the bonfire?
Great card, sorry it caused so many problems and now you have even more problems. Haven't we all got things from back in the dark ages? we should get rid but we still hang on, just in case and in this case it word very well.
It must be all those cocktails, keep away from the back of the bike shed tomorrow night, too much alcohol around to tempt you - oops shouldn't have said that.

oh Di, your card is GORGEOUS and I love the plaid papers! I had to laugh as you chose the exact same path I did - to connect each layer with sticky tape and then run 3 more pieces down the back to adhere it to the card! GMTA!! I'm so honored and flattered that you made this card - it's truly a wonderful feeling to know I've inspired you in some small way.
I'm so sorry you've had to deal with gout and are having such a horrible time with it, but hopefully it will subside. Take care, catch plenty of Zzzzzzz's and get better soon!

Well done for making these lovely folded trees, especially as you are feeling so rotten. Hope you recover very soon - statins have a lot to answer for IMO!! Take care.

Super christmas tree card . So sorry to hear you're in so much pain with your foot and fingers crossed it gets better very soon. Don't worry about the Playground - I'm sure there won't be too much mischief going on while your having a nap! Oh and no worry or hurry about the prize xx

That C Tree is awesome Honeybun. Now I wanna know how to dot it....last seen waddling off looking for some instructions in the Playground Instruction Book!!
As for your footie, big owch!!!!! Sowwie to hear about it Lovvie. I am sure we will behave tonight at the Bonfire Party!!!! Pwomise!!
xx

Beautiful again Di is your card what a great tree you created so beautifully put together...........oh Statin have good and bad reports hopefully you will not have so suffer to much pain for too long ........take care sending lots of hugs x

Sorry for late reply, Di...
This card is gorgeous. Well done for sticking with it. End result looks so professional. x