It's been a week or three since I entered into Merry Monday's challenge, and this week (#179) it's 'Pink, green and white' - a yummy combination.

So, I rustled up four cards, all the same as one another: 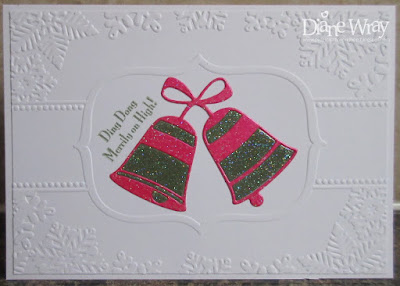 - piece of 6" x 4" white card stock, embossed using Crafts-Too's 'Snowflake Banner' embossing folder and then trimmed down to be slightly smaller than the card front and glued in place

- dithered over whether to add a sentiment or not - in the end I used a stamp from the Personal Impressions set called ''Many Greetings' and a Brilliance 'Pearlescent Ivy' ink pad to add the words 'Ding Dong Merrily on High!'

Isn't it Murphy's Law? More often than not it's hard to get sparkle to show on photos of cards - this time the sparkly film is shining so much in the photo it's overpowered the green behind. Sigh :(