I made a card for two of my favourite challenges:

I did struggle with the 'Heart(s)' theme a bit, then decided to flick through my album of non-Christmas fancy dies. And there looking back at me was a Memory Box 'Bingham Heart' die (a gift from Mo when she was over here visiting the other year - mwah!). I immediately thought 'red flowers', a bit like poinsettias, and off I went: 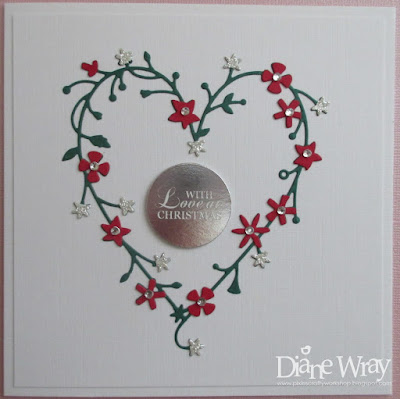 - a 6" x 6" layer of white linen card for background, as yet untrimmed at this stage

- snippets of green, red and sparkling silver card from the snippets folder

- then die cut three hearts, one from each snippet, having backed the green card snippet with Stick-It double sided adhesive sheet

- popped the green heart onto the background piece of card, as centrally as possible

- then, one by one snipped off the red flowers and added them on top of the green heart shaped die cut, using a Quickie glue pen

- then I did the same with the sparkling silver stars

- then trimmed the whole piece down to be slightly smaller than the card blank and glued it onto the front of the card. I found it best to do it this way as there's more chance of ending up with the heart centralised :)

- finally, a silver sentiment (With Love at Christmas) from Craftwork Cards was added in the centre of the heart, popped on with thin sticky pads

And, trust me, I just knew this would be fiddly before starting out - so I only made the one! Like I often say, I may look daft but I'm not totally stoopid :)