Our next door neighbours' little boy is obsessed with all things to do with 'digger dumper trucks' and such and one of Max's favourite games is moving earth from one flower bed to another - using one of his many toy trucks and JCBs. So, when it came to making his Birthday card, it was a bit of a 'no brainer' really - I found a card almost identical to this one over at Memory Box's gallery, but can't find a name to give credit to: 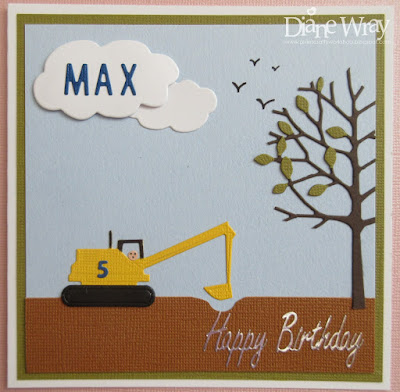 - pale blue card to build the scene on

- strip of brown Core-dinations card with a 'hole' dug, partly using a SU 'Itty Bitty' punch and then finished off freehand  :)

- a snippet of brown card and a snippet of olive green Core-dinations to die cut two Memory Box 'Arboscello' trees. I then radically 'pruned' the brown tree and just added a few of the leaves from the green tree

- the JCB is a Memory Box die called 'Excavator', die cut using goldy yellow and black card snippets. I just inked over the cab and the upright exhaust using a permanent black marker pen. The little face as suggested by my in-house critic was such fun to do (not!). It took umpteen attempts to add two eyes and a mouth to such a little peach coloured punched circle. In the end I used temporary adhesive to glue a little row of the circles onto my glass cutting mat and then went along adding eyes and noses to them, all using a black fine liner pen - and finally there  was one that was balanced and useable! So much easier than trying to add marks to teeny circles that want to fly away as soon as they're touched

- final touch, a silver 'Happy Birthday' peel off, bottom right of the card to balance things out - and also 'cos my in-house critic insisted that you can't send a little boy a Birthday card without it having that greeting on :)

I'd like to enter this card into the current challenge over at Cardz 4 Guyz, where the theme is 'Something beginning with T'. I have on this 'ere card a tree and the beginnings of a trench :) It's my first time playing along with Cardsz 4 Guyz, but I hope not the last - maybe it'll pull me out of the 'girlie cards' comfort zone :)