First of all, a snippets card from me. I had carefully peeled a lovely heart shaped topper off the Valentine's Day card that Len gave me this year and it was on my desk for weeks. Then, I had a paper pad out for a different card (still to be made) and the topper and one of the paper designs just seemed to wanna have a hug :) So I made this: 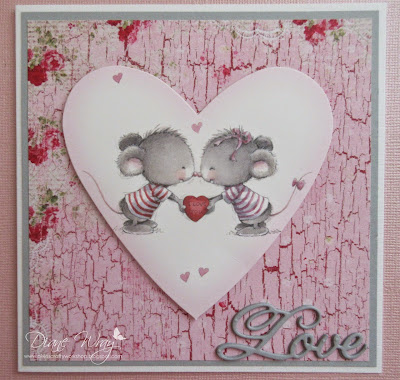 - backing card by SU, 'Smoky Slate', from the snippets folder

- a piece cut from a sheet of patterned paper in the LOTV 'Heartfelt' paper pad (I love this pad!)

- the word 'love' was die cut three times from another snippet of SU's 'Smoky Slate' card stock (backed with Stick It adhesive film) then layered together for dimension. The die is by Cheery Lynn, called 'Love' (now there's a surprise!)

And a little update on the Snippets Playground. When this publishes we should be back home but, as I said already, the Playground will run for a further week to give me time to catch up. However, I'm adding some little runner up prizes into the draw: 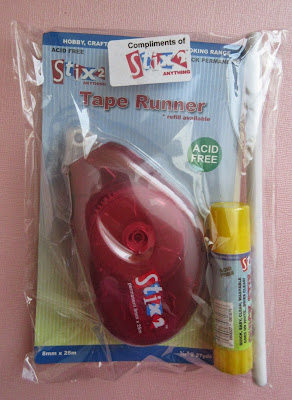 The lovely people at Stix2 sent me four of these little packs to give away. Each one contains a packet of tiny sticky pads, a tape runner, a glue stick and a really handy 'Pick Up Pencil', which is so useful for picking up little gems etc.

To be in with a chance, all you need to do is to have at least one entry in the Mr Linky on last Sunday's post HERE. You have all of this coming week if you haven't already played.

Then, just leave a comment here saying you'd like to be in the runner up draw - of course if you already said you want to be in the main draw you can also enter this one as well!

Now, I thought there might be a little complication with posting these packs outside the UK.  I've checked with Stix2 directly and they post the glue sticks overseas, they go on white and dry clear and are non-flammable - so you can all play along too, no matter where you live!