Whilst I do love travelling and 'foreign' muck as Kath would say food, I also get a huge hankering for good old British cooking by the end of a foreign holiday. This dish will certainly be on the menu again for this coming week! I strongly recommend it - absolutely scrummy! 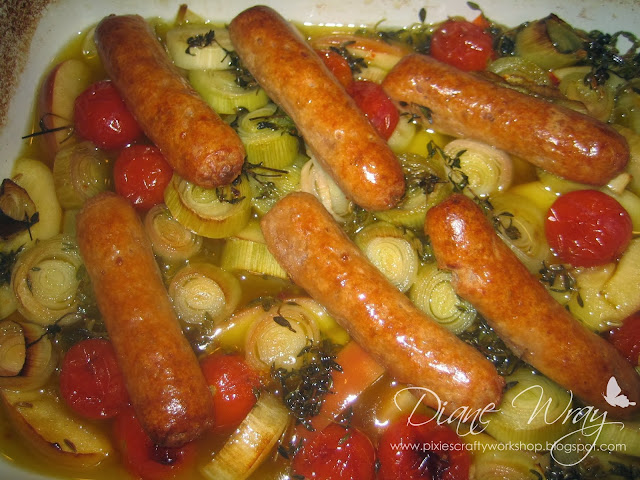 Sausage and Apple Bake with Mash

Place the apples, leeks and cherry tomatoes in a roasting dish then scatter over the fennel seeds, thyme and crushed chillies and season.

Place the sausages on top then pour over the wine.

Finally, drizzle over the oil.

Roast for 40 minutes until the sausages are golden brown, cooked through and no pink meat remains. Serve with mashed potato.
Things I do: Not a lot really, although as it was for two of us  I did think that just two sausages each wasn't gonna tick all the boxes so I used three each (frozen Richmond Thick Irish sausages in fact) with the rest of the ingredients exactly as in the recipe. And no extra vegetables apart from creamy mashed potato 'cos of the leeks and tomatoes in the recipe.

By the time this posts, we'll be tucked up in our own bed, recovering from the looooooong and very tiring trip back home. Quick edit: We got home safe and sound and I'm already in my PJ's and ready to hop into bed, less than an hour after getting into the house! That has to be the fastest shower on record  - 14 trips I think we've made to Thailand and it seems to get harder not easier :( For some reason the room is swaying right now, I think it's from the flights - no time as yet to go hunting in the Playground for any leftover cocktails mixed up in buckets so we can't blame those!