Although I used the VersaMark Watermark stamp pad yesterday to cover and then enamel some gilt metal corners with Frantage, the real reason I bought the pad was to have a play with 'resist' stamping'.

I learned a few things along the way, including not to use a really detailed stamp otherwise it tends to just become a blur - this is one I did feel was OK though: 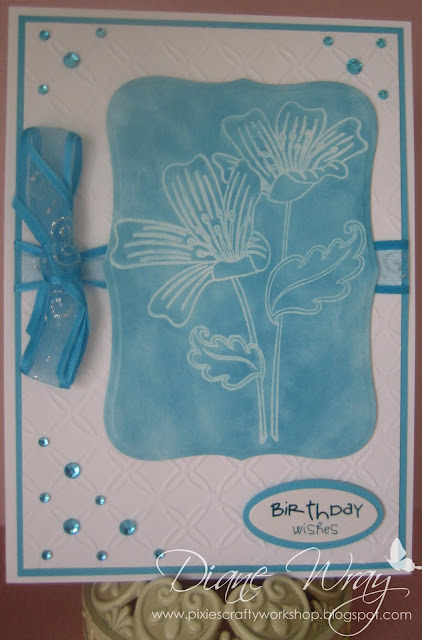 - Penny Black 'Pin Striped' stamp, stamped with VersaMark onto Clarity coated/silk card and allowed to dry. Then it was rubbed over with Memento 'Teal Zeal' ink using a wedge shaped makeup sponge before being polished off with a piece of kitchen roll. NB. I didn't use embossing powder and heat set it, although that is an optional step extra of course, it was purely stamped with VersaMark and allowed to dry properly before going any further

- a piece of white card was embossed using Crafts-Too's 'Lattice folder. For those few who might not know, Couture Creations have at last re-issued their 'Tied Together' embossing folder - I actually really like both of them, the 'Tied Together' one has more elongated shapes whereas the Crafts-Too one is symmetrical

- a snippet of turquoise ribbon was then wrapped around the turquoise and white layers before attaching to the card front. I think this was about the very first ribbon I ever bought for card making, it has little silver swirls on it plus was wired, which is easy enough to remove

- sentiment is by Craftwork Cards, just popped onto a turquoise oval punched with SU's oval punch

- I then went a bit mad with turquoise gems in the other three corners :)

After making the image for this card I had another go with a different stamp using a TH blending tool with felt pad attached with velcro - it worked OK too but I do like playing with makeup wedge sponges. Err, and I suppose the dreaded brayer is still to be tried with this technique :(