Helloooooo girlies! I think this last week was a bumper one in the Playground, over 50 entries and they were still trickling in as I type this on Saturday morning, a couple of hours before locking the gates at 11am UK time. Later on: Final count - 54, wahoo!!

My snippets card first - really clean and simple, although carefully cutting out the insides of the letters to paper piece was a little bit tricky-woo, but I think that was due the the paper being almost card thickness: 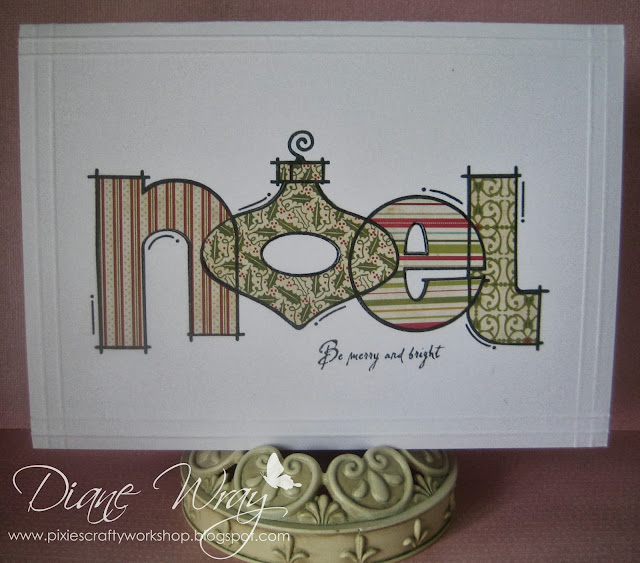 - snippets of paper from Echo Park's 'Season's Greetings' double sided paper pad - I always tuck snippets inside the front cover of patterned paper pads and every single letter came from a little snippet. A little tip that Jules gave me ages ago - always use the glue pen or whatever on the main image, it makes life much easier than trying to fiddle with sticky pieces of paper

- sentiment is also from the same stamp set, stamped in Memento 'Tuxedo Black' with heart in mouth after the paper piecing was done. Normally I'd always stamp any sentiment that's going straight onto a card before adding images etc. - for fear of wasting a lot of other work if it goes 'wonky'

- had thought about adding strips of other paper from the same pad around the edges as it looked a bit stark but instead opted to emboss double lines right round using the Hougie board - less is more :)

And what a task you've set me this week - your snippets makes are going from strength to strength. I don't want to just select using the random number thingy apart from prizes, am not keen on having a voting system and don't have a team to help me out. To be honest, in my only foray into a DT (you didn't know about that did you?!) I could see that collating the views of several people would be a nightmare. Maybe you disagree and have other ideas though?

And if you're curious abut the DT business, it was about 18 months ago when a team was being reformed. During the run-up to the relaunch, and I was even making DT cards for forthcoming challenges by that point, I found out that the challenge would in future be published on Sundays so I stepped down 'cos the Playground is more important.

Anyhow, enough drivel, here are what I think are the picks of the week: 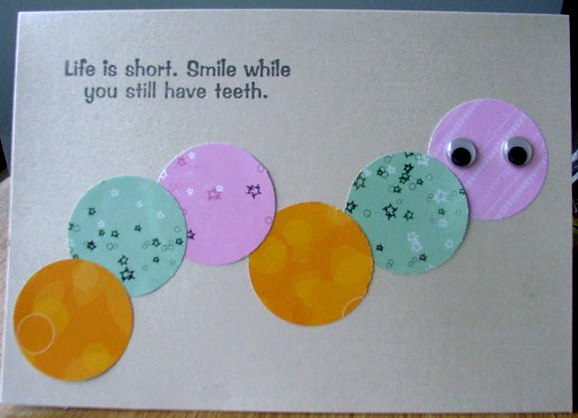 Just had to show you  this fantastic use of snippets, made by Tilly. Such a clever result purely from using punched circles, a couple of googly eyes and a great sentiment! It really made me giggle. 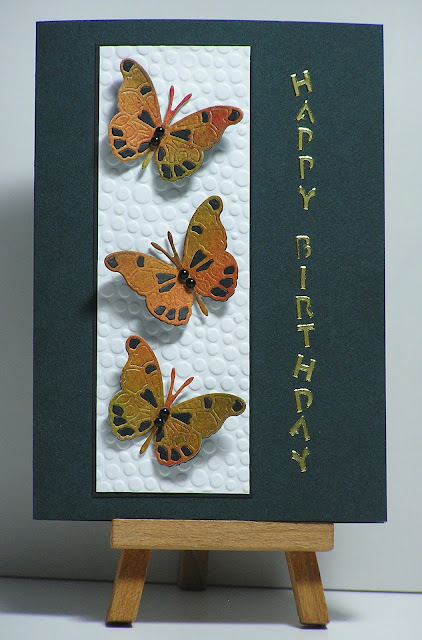 I picked this card, made by Cathy R, because not only does it use snippets but take a closer look at those butterflies! I have this die set of two butterflies and would never have thought to carefully fill in the top 'lacy' layer with a mix of the black and rust colours. Brilliant idea Cathy! 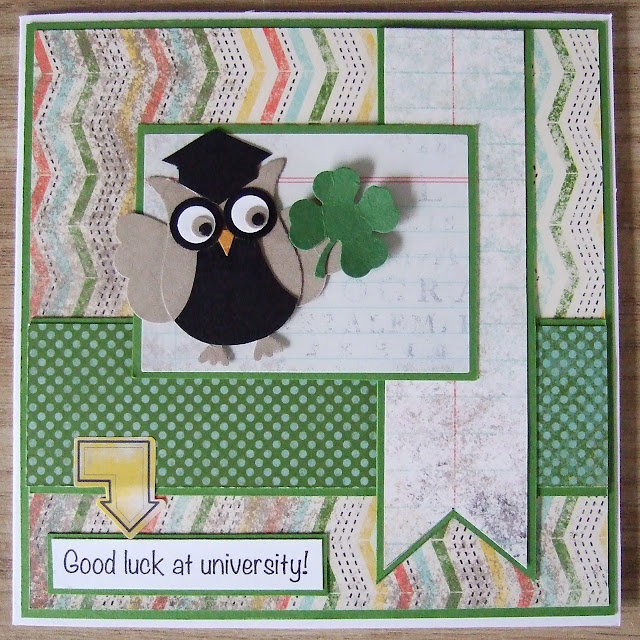 How about this for brilliant co-ordination of papers by Victoria? And the snippets owl is adorable isn't he? :) 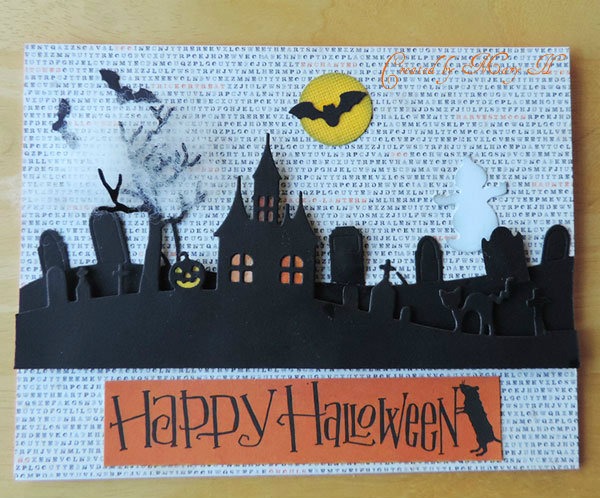 And what a great Halloween card! Made by our Mary H, spooky and just perfect don't you think? And just look, what a brilliant idea to use a little wisp of cotton wool for the fog in the tree :) A really clever card Mary.

I could add tons more as every single make is fabulous girls - please don't be disappointed if I didn't show yours, it certainly doesn't mean they are any less wonderful.The best way to check out all the lovely entries, if you haven't done so already, is to nip back to here and look through Mr Linky.

OMGosh, I need a lie-down after all the brain wracking here.

But, if I'm to bake a cake and also do some ironing (ack) I have to move on so it's this week's winner of the Memory Box 'Bells are Ringing' die and the Inkadinkado Christmas Silhouettes stamp set:

This really has tickled me no end here! Nessa is currently running a Frugal Christmas Challenge over on her blog - 'cos she disposed of most of her Christmas card making goodies!! The idea is that we make a Christmas card, or several, using non-Christmas stuff - although Christmas sentiments and paper ARE allowed.

Well, now you have a few things the stamps to get cracking with Nessa! Talk about first time lucky. Can you please send me your snail mail address and I'll post your prize ASAP (di_wray@hotmail.com). Well done!

And the prize this week isn't exactly difficult to guess is it? 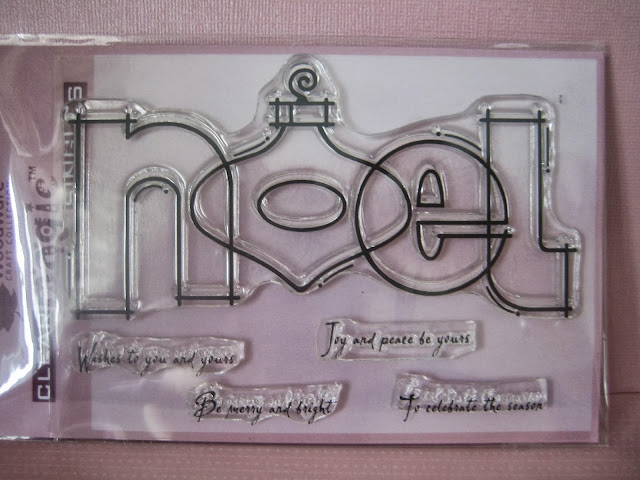 Yup, it's a Woodware stamp the same as the one I used today -  and it comes complete with four small sentiments too :) I think it's brilliant for snippets paper piecing and could look stunning if you used double sided adhesive sheet (which I think you'd need to stamp on one side of the unpeeled adhesive so you do get the outline, using Stayzon or similar so it doesn't smudge) before snipping out each letter, peeling off the backing and then one at a time fixing them over the main stamped image and adding coloured fine glitter, press it in firmly and whisk off any excess (I use a huge soft Avon blusher brush) before moving onto the next letter in a different colour. Just a thought, although I haven't tried it yet! It might just end up like a sticky mess :(

The Playground will run as usual this week with the gates closing at 11am UK time on Saturday 28th September. Maximum of three entries and please say 'No thank you' in a comment if you wish to still play but not be the winner of the prize this week, as shown above. It might be an idea to also say if you're trying for the 'Rising Bubbles' stamp - sometimes I have to second-guess. You still have time, some people have already qualified by making three cards already, but remember that your three entries can be spread over last week and this coming week, or even all three this week.

Mr Linky is below - do please let me know if you have any problems linking, I can sort it out for you quite quickly and am always happy to do so.

PLUS, please remember that on Wednesday it's Rudolph Day over at Sarn's - always a fun challenge so perhaps this coming week we might have a few more Christmas cards on here that are also for Rudolph Day :) You've gotta start sometime.

Edit: Nessa has very sweetly asked me to put the Memory Box bells die back into the Toybox and give someone else a chance to win it. Soooooooo, rather than muck about, I'll just use it as a future prize. Perhaps on a week when I can't make a snippets card tied into them there bells :)