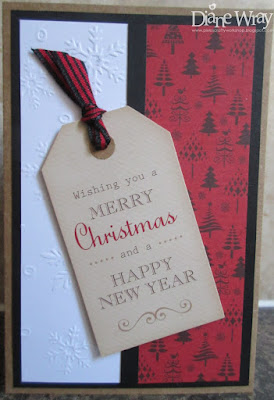 A very classy card Di - great use of your snippets!

I really like the sharp contrast of the colors and panels, but those little trees are just the cutest! Great card Di!

What a fabulous card Did!! I love the paper and embossing and I love that tag. The sentiment is laid out so cute. Hugs, Brends

A lovely card Di - great use of snippets and upcyling too!
Kath x

Love the look of this festive snippets tag card Di. Thanks for the "how to" details.

Oooo what a super snippets Xmas card and good on you for upcycling, the tag too, Luv Sam x

This is a lovely snippets make Di and the red, black and white go beautifully with the kraft sentiment tag on the top, and such pretty ribbon to finish. x

Beautiful totally recycled card, I think it's perfect for male!

Another great Christmas card. Love that upcycled tag. You did a wonderful job on reviving it!

I have made a list of exactly how many Xmas and Birthday cards I can hand deliver. My thicker, heavier cards will be used for those. Once those are made, it can only be slimmer cards for me or I will have to take out a mortgage on the house to pay the postage bills!!!

Another great Christmas card. Love that upcycled tag. You did a wonderful job on reviving it!

I have made a list of exactly how many Xmas and Birthday cards I can hand deliver. My thicker, heavier cards will be used for those. Once those are made, it can only be slimmer cards for me or I will have to take out a mortgage on the house to pay the postage bills!!!

Neat card! And extra cool that it is all recycled.

A great upcycled snippets card Di. Black white and red is always such an elegant colour combo. I really love that embossing folder....onto my wish list it goes ;0) Have a lovely weekend xx

Great use of the up-cycled tag and mounted on a great background.
Have a good weekend, not that it makes a difference to us.

What a clever use of all those snippety snipets. So glad I availed my self of the art pads when they were on offer last yr. I have my stash. Trouble is you can't really cut them down!! hugs Mrs A.

I adore the colours Di and as Mrs A has said awesome snippeting/snippetdom! Maybe we can make a new word from that and get it into the Oxford Dictionary lol! I just popped my final snippet entry in but have labelled it wrongly as #2 instead of #3: so sorry Karen xx

Thanks for playing with us at CraftyHazelnut's Christmas Challenge Extra for January and good luck!
Monica - DT

Great use of snippets Di and a lovely card too x

Lovely card. Great use of those snippets.

Love any colour against black, makes it stand out brilliantly...great card!

Great up cycling Di. Love the Kraft with the black and red.

Big thumbs up for up cycling, Di :)
Love this card.x