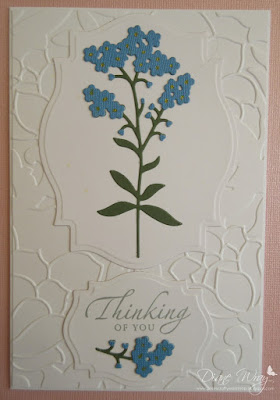 You nailed the forget me not challenge. I love the flower die and the color is perfect. That is such a pretty embossing folder for the background. Hope you are feeling much better.

Yep, I really like the forget-me-not die, and especially how you used it on this card! The labels 18 die cut panels look perfect for the image and sentiment, and that background embossing is stunning! Very pretty card!

It's a very pretty card Di. The label dies look good on that lovely embossing folder and I'll be back on Sunday to see that super die again. That's a good tip for embossing the labels. Barbxx

Clean, crisp and elegant DI. Off to mail yo know, forgot the other day when I had promised.

A lovely card and a super die - I'll see you in the playground on Sunday!
Kath x

Very beautiful! I absolutely love those blue flower bits (looks like it is sort of textured cardstock you have used)

Did I mention how beautiful this card is :)

Lovely card Di that's a beautiful shade of blue, great die loads of possibilities there, love the clean elegance of the card.

That is divine - such a beauty :-D xxxxxxxxxxx

You may think simple, Di... but this is really quite beautiful.
Hope things are continuing to improve for you.
Donna. X

Like this very much Di - am having a bit of a CAS streak at the mo so it suits me perfectly!! x

Perfect card for our challenge and so pretty! Thanks so much for playing along at Double D!!

Aaaah what a delightful flower and i'm so loving that gorgeous background, Luv Sam x

Thank you thank you for entering your beautiful card in our new challenge and for the shout out, too, I appreciate it so much!! That die you have used is absolutely perfect for the challenge...our new challenge is next Wed and we hope you will come back...the challenge will be Brrrrr!

Oh, how beautiful! Love your embossed background, and those flowers couldn't be more perfect. Just a pretty, pretty card! So glad to see it in our first Double D Challenge!

A beauty of a card Di. Love the delicate blue flowers against the white background. x

Oh, love it so much!!! Such a delicate and very elegant CAS!! The embossing matches amazing with the two shapes and the forget me not are just stunning!! I think this is a perfect card!

I love forget-me-nots. This card is simply beautiful!

I love these beautiful diecut Forget me nots Di and the colour of the card is perfect, also such a pretty embossed background and the label dies as mats for the flowers and sentiment. x

So pretty Di! Love your sweet blue blooms. Just reminded me that I used a snippet in my last card, so I'm going to update my post and link up. I keep forgetting! At some point I hope it will become a habit! :) xx

Perfect card for the challenge Di, I've not seen that die before, nor the embossing folder. They are both lovely!
Janice x

Hello Di, with the elegant embossing and that pretty flower, your card is just perfect.
Thanks for your comment on my kitchen blog. Things have been hard for me recently so I haven't crafted in forever, but I'm starting to feel the urge again, so watch this space :-)

PERFECTLY fabulous! We are SO GLAD you've come to join in our fun new challenge and thanks so much for the wonderful shout out! Greatly appreciated! LOVE your design ... just might have to 'steal' that idea ... looks quick, easy and FABULOUS!! Thanks again for joining in the fun at Double D Challenges! We hope you’ll come back often.

This is very delicate and pretty. I like that the greeting isn't in black. That would have been too stark.