Today is Kai's Birthday - Mum to Len's two grand daughters. Most of you know that the family lives in Germany - and, like us, have been in and out of lockdowns until they're dizzy.

In honour of Kai's Birthday, I broke open a new Stamping Up set of stamps and matching dies, bought a while back - to have a play. After so long away from serious crafting I forgot how to set stamps onto the Misti! No worries, not losing the plot - just not concentrating properly and so ended up putting them on face up instead of face down.

This is the card I came up with - I worry it's a 'bit old fashioned' for a gal in her 40's - but Len gave it his 'stamp' of approval at least - and Dudley gave one of his interested and approving dabs of his nose when I showed it to him: 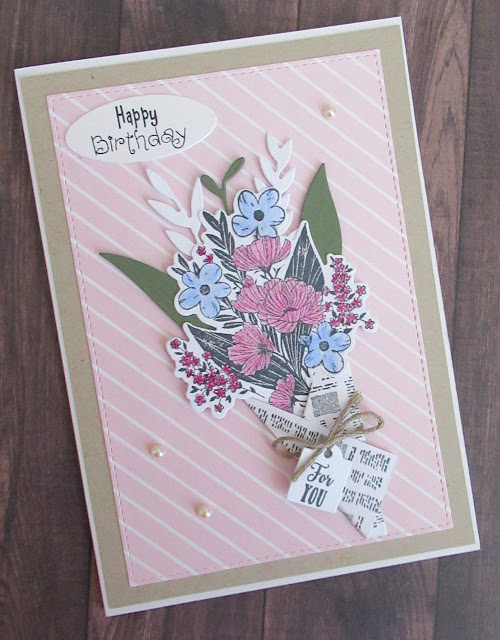 - piece of Neenah 'Desert Storm' card stock as a contrast to the pink striped background I added later. Initially I hoped to make the card blank using the 'Desert Storm' card but it isn't thick enough so I resorted to cutting a piece a smidgen smaller than the card front and glueing that in place

- then die cut a pink striped panel from a piece of paper from Dovecraft's Back to Basics 'Bright Spark' paper pack - it's pale pink and not at all bright so I reckon it crept into the paper pack when no-one was looking! I used a die from a Heffy Doodles A6 stitched rectangles set of dies - huge thanks again to Sarn for initially finding these and subsequently enabling 'Little Miss Copy Cat' to follow suit - I love the delicate 'stitching' as well ☺

- next, used the Stamping Up 'Wrapped Bouquet' set of stamps to stamp the bouquet, newspaper wrap and little tag sentiment - all using Memento 'Tuxedo Black' ink and my smallest Misti

- die cut the stamped elements using the Stamping Up 'Wrapped Flowers' set of dies then flipped the newspaper wrap over and stamped on the reverse  - I followed a YouTube tutorial to work out how some of it was done, otherwise I'd still be sitting here pondering!

- as per the video I folded the newspaper wrap into shape and tucked then adhered the bouquet of flowers into the 'wrap'. It already was looking good - hooray!

I'm adding this into Darnell's NBUS challenge - the stamps and dies are on their first trip out!