Well here we are, trotting through May, and I still haven't felt warm enough to dispense with the Liberty Bodice and Ladybird vest, sigh. Hands up who remembers those! 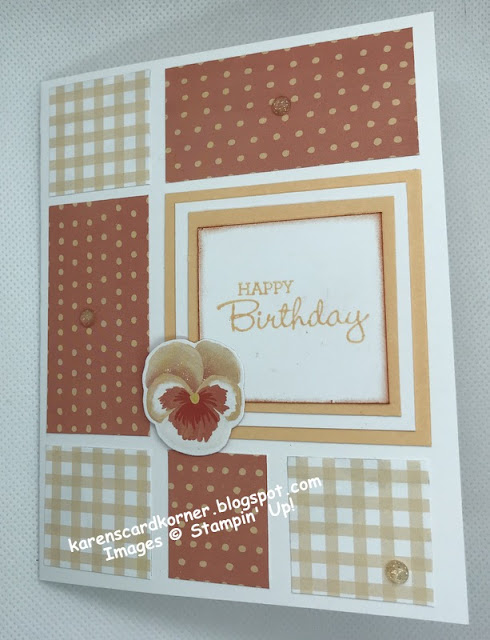 Karen (Finkle) returned after being AWOL for a while - welcome back Karen! I really love this card - such a clever way to use up snippets. It would also be great for a chap, without a flower - those papers go together so well and such a great layout. 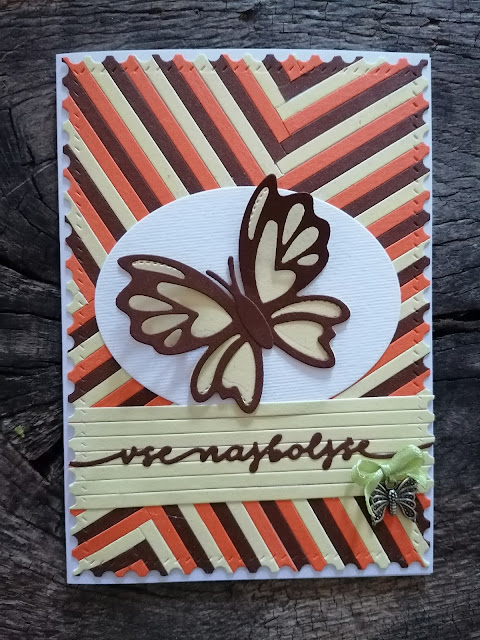 Valerija brought this great card to share with us. Herringbone backgrounds are always a super way to use up snippets. Love the colour combination as well. And, the strips were cut with a die - which cuts four straight narrow strips at once. Only problem is I don't speak Slovenian - found my way to the suppliers' website but there's no translation option. I can speak German and make a decent stab at most languages - but this stumped me. I wonder if any UK or USA manufacturers have a similar die? Anyone know? Edit:- I did some more searching and found a die set which cuts long slim strips in three different widths - four  of the same width per die. It's a Pinkfresh Studio Essentials Slim Stripes Die Set - stocked by Bumblebee Crafts here in the UK. Hooray! 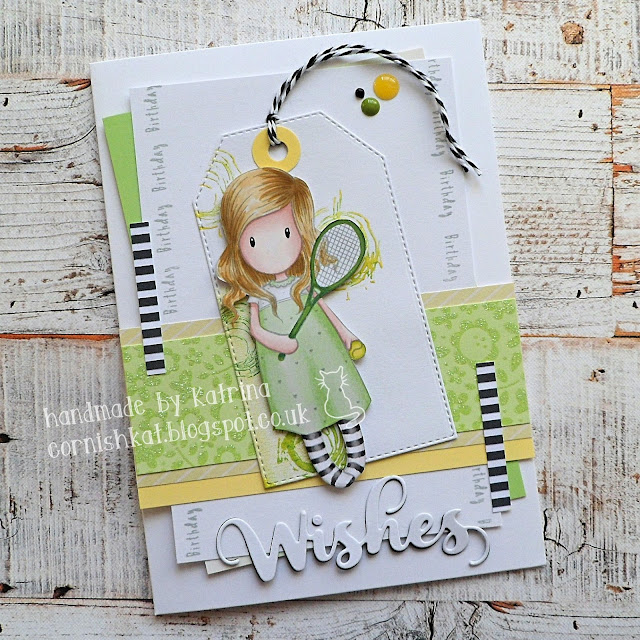 I picked this card, made by Katrina, as I adore Gorjuss girls. Love how so many snippets have been used, love the layout - and the colours are just perfect! A really lovely card and one I could gaze at for hours on end. 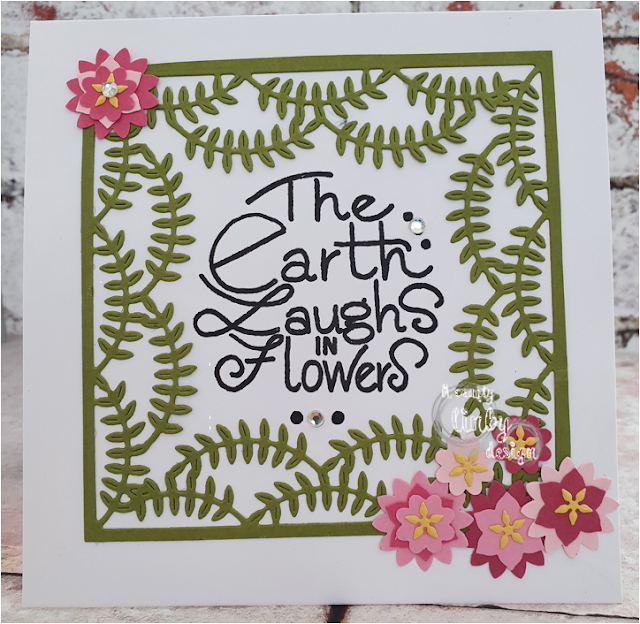 I just had to add our very last entry of the challenge - Linby whizzed in waving this beauty! It's another lovely card and I do so love the layout with the frame and those pretty pink punched flowers. Little punched elements are a great way to use up snippets - I often forget I have so many really nice punches and just reach for one of the many folders of dies I have here.
I loved the quote by Ralph Waldo Emerson on Lynn's card so much that I absolutely had to rush off and buy it. Not only the words but the fabulous font drew me to it like a moth to a flame. ☺ What really surprised me was that the stamp set it comes in (called Nottingham Lace) is made by Indigo Blu - and I would never have associated that style of font with their products. Bonus, I found the set on e-Bay - new - and a lot cheaper than other places are selling it for, also cheap postage. It always pays to check e-Bay I find! They still have three left - 'wink'. 🤣

That's my picks from Challenge # 402 - in Ruby's Memory. We had 42 entries and no new Playmates. I do know that one or two crafters are hovering on the sidelines, perhaps plucking up their courage to come and play with us. Come on in - you would be so welcome and I always feature your first entry on the following picks and prize draw post.

Time for the draw now - no hanging around this week! The prize is two lovely stamp sets kindly donated by Vicky. And the winner is:

Congratulations and a big 'hooray' Jackie! I've quickly skimmed back through prize winners names and it seems to be forever since you won a prize. I know that you're a fairly frequent 'pick' - but after so long playing faithfully with us I really was pleased to see your entry number pop straight out of the Random Number Generator! I have a hair chop booked for Tuesday and if you get your address to me on Sunday, or Monday at the latest, I can do a detour past the 'remote' post box on my way home.

Please send me your address, with your full name at the top as well so it can be can be copied and pasted for speed and ease. It's also confirmation that you still would like the prize of course.  Please put Playground Winner or similar in the subject line of your email in case it drops into my junk mail. Email address is on RH sidebar as always.

Remember folks, there's still almost one more week to run on the current Challenge #403 HERE. The prize is a Sweet Dixie 'DIY Tools' set of dies - perfect for those 'male' cards - as well as keen lady decorators of course.

We had a brilliant lady decorator during and for a while after after our extension was being built. Sue was married to the builder and totally fearless swinging around the scaffolding painting the barge boards etc. at the very top of the roof level. As often happens, she eventually moved onto his other jobs but boy was she good - really petite but what a little worker - as well as a perfectionist!

Our own news isn't very exciting really. Archery for Len is as safe as can be and people are abiding by the 'rules'. I decided against 'hoofing it' through the town's massive shopping mall, including lifts down from the multi-storey car park, a one way pedestrian system and also wearing a mask the whole time just to get to the optician. Partly in the light of growing Indian variant concerns and also as it was just too much exposure in some confined spaces. I've now found a different and very reputable optician with easy parking directly in front of their lovely new premises. I don't want to leave it too long as the hospital want an eye (see what I said there - hee, hee!) kept on these cataracts which were deemed 'no operation needed' yet - just before COVID lockdowns hit us. They don't seem any different but eyesight is the one thing not worth taking chances with.
Dudley is still into mischief here. The other day he managed to bring a smallish piece of branched twig into the house on the quiet. Little tinker left a decoy piece of it on the landing which was whipped up and disposed of right away - then we spotted him very focussed on something with his back to us. Yup, it was the other part which he'd hidden for later!
The donation I make to the charity that initially rescued Ruby as a little puppy has been done. Huge thanks once again to those who have donated goodies which enable me to transfer what I would have spent myself on prizes for Ruby's Memory Challenges. And of course to all of you who come to play in the Snippets Playground and make this challenge such fun. And also, although my bank manager might disagree, for 'enabling' even more goodies to somehow land in my online shopping baskets!
Almost forgot - it's Rudolph Days once again from Tuesday 25th until the end of the month over at ScrappyMo's blog.
Love from Parsnip, myself and the usual happy 'high-five' and woof from Dudley.