My wonderful and so young at heart 'Uncle Frank' is 90 years young tomorrow (how did that happen?!) and I really struggled with ideas for his card. In the end, I used a stamp set that's saved me a few times in the past and seemed so perfect for him as he likes a wry smile: 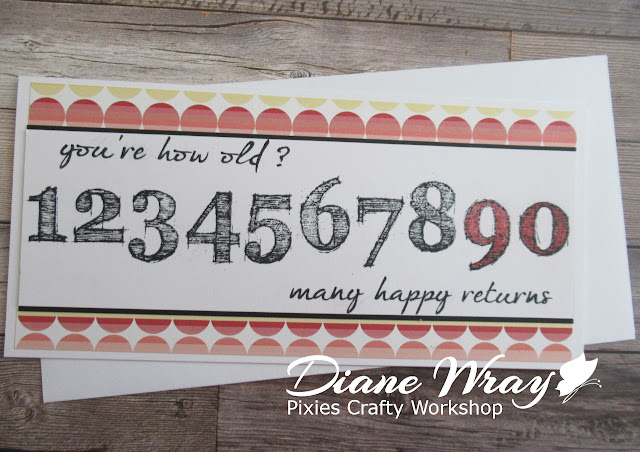 - backing paper from a 12" x 12" Studio Calico paper pack appropriately called 'Snippets' so kindly gifted to me a few years ago by a blogging friend - thanks B! x

- then stamped the numbers and sentiments onto a piece of white card, using the Misti, Memento 'Tuxedo Black' ink and a really handy set of stamps by Woodware called 'Numbers'

- was going to paper piece the '90' but it just felt a bit messy when I'd fussy cut the numbers in readiness, so I coloured it instead, using a (perfectly matched to the backing paper) red Faber-Castell Polychromos pencil

- added it to the patterned paper then glued it all in place using Collall All Purpose Glue - finished!

I had a couple of false starts with the stamping - used a new black ink Memento 'Tuxedo Black' pad - and forgot how lightly you need to use them when they're 'fresh'. Also did the background patterned piece twice as the first one didn't have enough red in the pattern where I'd cut it.

I've written here before about Uncle Frank and his late wife , the sweetest ever Auntie Alice, who were in fact my own parents best friends many years ago in Germany. When Mum and Dad 'ran away back to England', leaving me aged 16/17 at boarding school, they had to appoint guardians for me.

Alice and Frank were their immediate choice and as as they weren't due to leave Germany until after I'd finished my final year at school it was just meant to be. Their task was to step in if, for example, a signature was urgently needed for something medical. Or, we kids were evacuated due to anything untoward happening (the Cuban Missile Crisis had not long ago happened - showing my age there!) and plans were in place to disperse 600+ children from the boarding school on the North coast of Germany overnight.

Plus, I spent half term breaks with them where they lived in Hanover, Germany - too short to return to the UK those days although always great fun and they were so very kind to me. Bearing in mind they didn't have children of their own, it must have been a bit of a shock having a teenager land on them - who couldn't usually see much beyond her fringe. Frank has subsequently confessed that he longed to take a pair of scissors to it ☺ Goodness me, good job he can't see my fringe right now!

Alice used to spend time baking, with me avidly trying to help - I always remember her with such fondness if I bake a lemon drizzle cake. Her orange drizzle cake would be topped with chocolate frosting and to this day I've never made another one. Why aim for perfection when you've already had it - but I do a lemon drizzle cake (no topping) instead.  Plus Frank and I probably wrecked their record collection by playing them at 45rpm, rather than 33rpm - to make them sound more trendy and rather like chipmunks on something akin to drugs! Such happy days.

We had to go to the NAAFI to restock my toiletries, writing paper and (ahem) certain personal items. Frank always made himself scarce for the 'girlie stuff' but did reappear for the 'tuck box' goodies selection process.

He really was such a sport - and still is. Most days I get a message on FB with a 'funny'. This is the one that arrived today, Tuesday:

And finally, this is me, with Alice and Frank in their Aberdeenshire back garden, a good few years ago, a photo I treasure so much:

My beloved surrogate parents - and I'm so very grateful to this day for their love and kindness. Have a wonderful day - my dearest Uncle Frank - and here's to the 100th Birthday telegram in 2031!