I've been seeing so many tall and slim, or wide and slim, cards lately, and finally set to the other day - when inspiration was out for a jog. It should be skinny as a rake with all the 'going out for a jog' it's doing these days!

Am really badly behind on Christmas card making so I decided to try out a new scenic paper pack from Whimsy Stamps - and this was the resulting card: 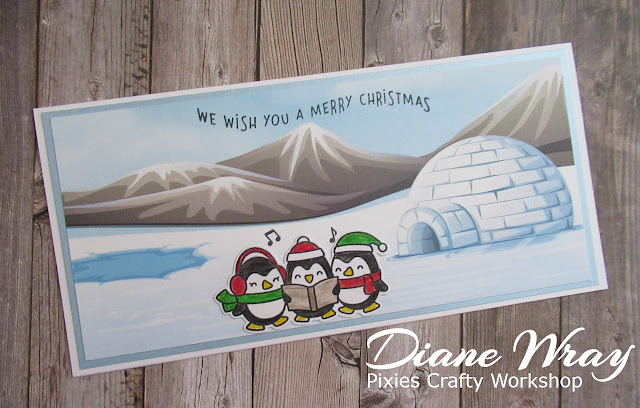 - a sheet of paper from the Whimsy Stamps Slimline 'Frozen' scenic \9including igloo to keep the penguins warm!) designer paper pack. The really lovely background papers aren't matched to UK sizes, they're 8.5" x 3.5" - but a bit of pale blue pearlescent card as a 'frame', as well as carefully chopping off a bit from one side of the background Whimsy paper,cured that slightly 'unexpected and a bit disappointing' hiccup

- cut a piece of blue pearlescent card to 8" x 3.75" and then cut the background Whimsy paper to 7.75" wide and left the height at 3.5" so that it was even all round. BTW, the shade.colour of the card I used for framing the image panel will work with loads of the other image panels. Some of them do have mauve and pink tones so it might be that I'll resort to silver mirri or similar, if I can't find a good match

- had already chosen the stamps to use and they're from the Lawn Fawn 'Here we go A-Waddlin' set of stamps - love this set!

- at that point I knew how the scene would fit together, so I was very brave/reckless and stamped the sentiment directly onto the background, using Memento 'Tuxedo Black' ink - admittedly having first checked for 'smudge-ability' on a small piece I'd trimmed from the background Whimsy panel

- then I got even braver and re-positioned the 'still not stuck down' penguin trio and worked out where some 'notes' would go - thank goodness for the Misti!

- followed that with the Whimsy back ground panel

It made sense to make two cards the same whilst everything was on my desk, particularly as the background images come in twos.

As the paper pack is having its first outing, I'm linking this into Darnell's NBUS Challenge #26 HERE. It's ages since I played along, despite blithely using unused goodies as much as possible these days. Slaps own wrist.

I finally bit the bullet and switched over to using my new Canon camera that Santa brought - shame on me for taking so long! I hate change yet it's so similar, albeit much upgraded, that I kicked myself for taking so long to do the switchover. Basically I tend to use things until they're not working right and only then will I consider a change/upgrade. Err, although craft goodies are always an exception of course!

I also tried (following in the footsteps of others, as always) using some SU 'In Good Taste' wood effect background paper when I took the photo, with the card placed deliberately 'on the wonk'. A lovely friend sent me some to try out and then I plumped for buying a whole pack of varied effect patterns. My 'in-house critic' very much approved, so I may even advance to adding in an envelope behind the card, which possibly is more balanced as I've subsequently noticed a few of you doing this. And who knows - in time - perhaps the odd prop or two ☺