I recently had a little splurge on some Stamping Up goodies, and one item was the really pretty 'Dragonfly Garden Bundle' of stamps and co-ordinating dies. I knew exactly who I first wanted to use the set for - a very special friend who loves 'flying and fluttering' pretty insect as well as the colour pink: 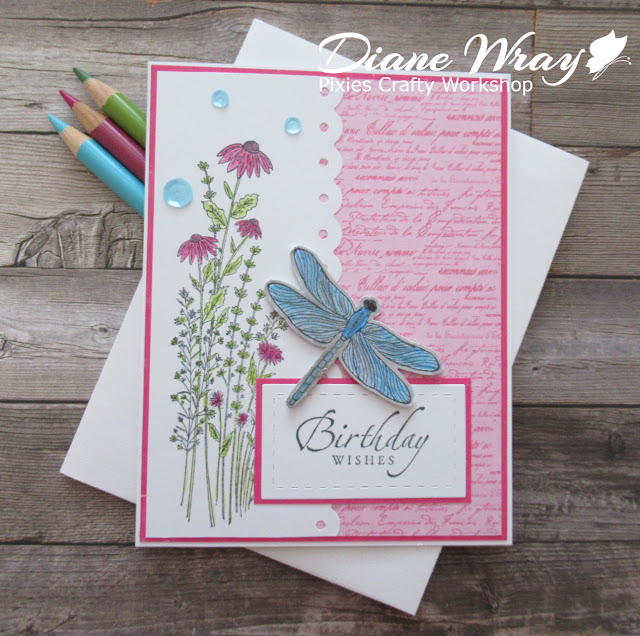 - coloured the dragonfly image using Faber-Castell Polychromos pencils, including the silver one in the set

- punched out the dragonfly using the co-ordinating punch, punched two more dragonflies from plain white card and layered the three together using a glue pen

- punched one long edge of the image panel using an ancient Fiskars punch - as close as I could to making the punched out pattern  equidistant at the top and bottom.

- then trimmed the panel to sit properly aligned on the pink script panel and also trimmed the plain left edge. That panel trimming process was possibly the most fiddly part and I've since wondered if I should have created the blank panel first and then done the stamping and colouring as my heart was in my mouth lest I spoiled it!

- next I used a much loved Stamping Up wood mounted stamp to stamp the sentiment, die cut it using a die from the Lil' Inkers Stitched Rectangle A2 set of dies

- added the dragonfly to the card front using little pieces of thin sticky pad, stood back and went 'Hmmmm' - I didn't particularly like the stark white border around the 'critter' so I went around the edge using a silver Wink of Stella brush

- by this point I was now going 'Hmmmm' over the white area at the top left of the panel - it seemed to make the right hand bottom of the card look too heavy - so I added three sequins in a similar blue to the dragonfly (using Glossy Accents) onto the 'white space', which just pulled the whole card together, IMHO.

- stamped a sentiment onto an insert and added to the card - finished!

The sequins are from Little Things from Lucy's cards and the mix is called 'Bubblegum'. In the USA, Simon Says Stamp carries stocks of Lucy's 'little things'. They don't have her UK full range - but I bet you'd easily find enough to spend your pennies on!

Am entering this card into Darnell's NBUS #26 Challenge - HERE.

I used loads more pencils (for blending, especially on the dragonfly) than those in the photo - but didn't want them to overpower the card itself in the photo. Sigh, but I couldn't pick up the subtle glimmer of the dragonfly, still getting to grips with the new camera.