Wow - I almost missed out on this month's Rudolph Days Challenge over at ScrappyMo's. That would probably be a first. As luck would have it, I came across an ancient Christmas card a couple of days ago which so far as I can see hasn't ever been posted on here, I was so proud of it too: 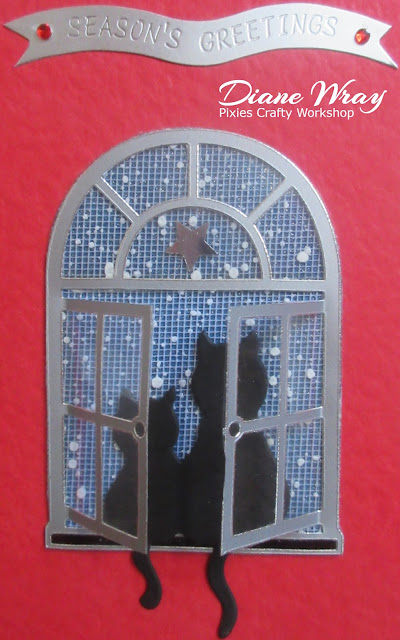 I used - bear with me whilst I think back:

- a silver window peel off stuck to clear acetate, which I then carefully trimmed so that the windows would open

- stuck a piece of craft stiffened 'gauze' with white spots on (like snow falling) to a scrap of dark blue paper, then onto a scrap of white card which I coloured with a dark brown Whispers pen for the 'window ledge'

- glued the window to the card front

- added the two black kitties (a ready made die cut bought from Kirsty Wiseman at Dies to Die For - which might give some of you a clue how long ago I made this card!)

- a small red gem either end of the sentiment strip to finish off!

Gosh, this was a walk down Memory Lane. I realised as I was writing this post just how long ago this card was made (possibly up to 13 or so years ago, I had to give up crafting whilst the house updating/additions were being carried out and the dining room was out of action and used for storage) - and also how the craft suppliers have moved on as well. Added to which so has life here and it's almost like a piece of history!

It was one of the very first cards I ever made for Christmas and I remember making a few the same or fairly similar at the dining room table using ready made die cuts from Kirsty Wiseman when she owned Dies to Die For, Lakeland made some lovely crafty items (they're back to being all household stuff now and have been for many years) and card blanks were ordered from a company based in Cheshunt. You could splash out and buy small swatches of the card they used - their website was basic and no colours or images. I don't even recall Hobbycraft from back then! A dedicated craft shop per se was a find indeed .......... it'll never catch on they thought! How wrong could they be?

The card was also made back in the days before we had die cutting machines of our own (as I recall), raising elements with sticky pads wasn't really 'in' yet, I was crafting in the dining room (long before I had a craft room or even this blog - I wouldn't have known a blog if it jumped up and bit me back then), I used wide double sided tape or UHU glue as adhesive, the acetate would have been (ahem) acquired from the office where we still used it for overhead projectors and I had some fancy edged scissors which I thought were the 'bee's knees'. The one thing is that, due to the lack of available inspiration, I did think up the design all by myself!

Ironically, I found this card just four days after the 11th anniversary of me dipping my toe in the water and starting this blog up. How time flies!