And another week in lock down flies past. Things have been slightly eased in England - which, needless to say, seems to be a signal for a few people to push the boundaries, and their luck, further than they should. Parents are letting their kids out unsupervised, non-family members are calling on people and social distancing is often being ignored even when people are out walking, queuing, going around supermarkets etc. Human nature working against humans in many cases - or just lack of basic common sense.At this rate we might well see a second 'peak'. Rant over - let's move onto happy things!

Here's my snippets card for this fortnight, trying a technique I've wanted to play with for ages: 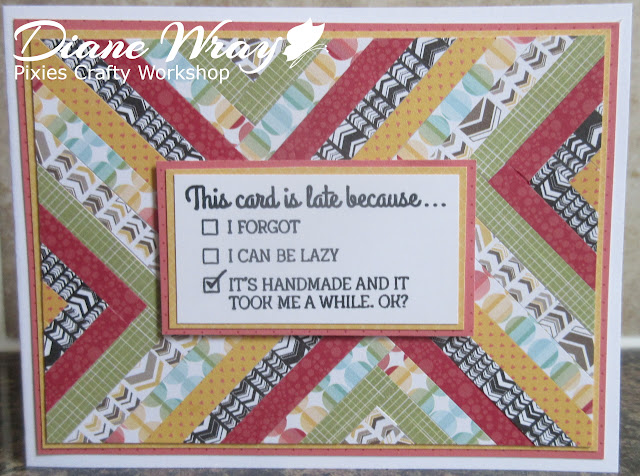 - a selection of quarter inch wide strips cut from snippets tucked in the back of Studio Calico's 'Snippets Collection' 6" x 6"paper pad - in six different colours/patterns.

- there are lots of videos showing how to make a herringbone panel - this one is my favourite. I used adhesive sheet instead of a tape runner - either would work fine

- spent a very contented time adding the strips to the sticky panel - it struck me that this would be a great craft project to take on holiday (hollow laugh), to make up a load of backgrounds. All you'd need is panels of plain card covered in adhesive paper, with the protective layer left on until needed of course, and a whole load of quarter inch strips of snippets (perhaps kept in separate cello bags for each 'set' of paper strips you wish to use - I think papers from the same pad would generally work well for this pattern - gonna tackle my LOTV Christmas snippets next, plus small scissors. Not recommended for a breezy beach though - beach, what flipping beach?

- the next step, once the herringbone was completed, was to snip off the overhanging ends of the strips - I'd done this after a fashion as I went along so as not to waste any small pieces but trimming the remaining ends from the back of the card panel evens it all up

- so I carefully trimmed the herringbone panel, a little bit at a time and ended up with a piece measuring 3.5" x 4.75" - which still kept the A2 card balance/proportions and evened up the pattern edges so they were nice and balanced (OCD again!)

- then layered the herringbone panel onto very slightly larger rectangles of yellow and red paper, from the same paper pad, to add narrow frames

- at this point, it had too wide a white border for my liking when placed on a 5.5" x 4.25" card blank- so I lopped quarter of an inch from the top as well as the opening side of the card blank

- glued the three layers onto the card front, using Collall All Purpose Glue

- then I stamped the sentiment using a NBUS sentiment from Lil'Inker's 'Just Sayin' stamp set - onto a snippet of white card, using the Misti and a Versafine Clair 'Nocturne' ink pad

- trimmed the sentiment rectangle and then 'ticked' which box I wanted to use before layered it onto a background/frame of the same yellow and red paper I'd used for the herringbone rectangle frame. All too often I've ruined something right at the 'last knockings' so I always try to think in terms of 'damage limitation'

- added the sentiment rectangle to the card front, using thin sticky pads to add a little bit of dimension

I loved making this card, especially the herringbone background. It's the selection and slicing of the papers I found to be more onerous - actually building up the herringbone itself is very satisfying!

Am loving the Lil'inkers sentiments set of stamps, most are slightly sassy and I'll use every single one of the stamps at some point

And I can enter this card into our lovely Darnell's NBUS Challenge #14 HERE, due to using the fun Lil'Inkers set of sentiment stamps for the first time. It was a second outing for the Clair ink pad but more details of that this coming week as I sort of flipped my posts around a bit. I do encourage you to join in with Darnell's challenge if you haven't done so already - now is an ideal time to crack open some Never Before Used Schtuff and this current challenge runs to the end of May.

And here is the prize for this fortnight: 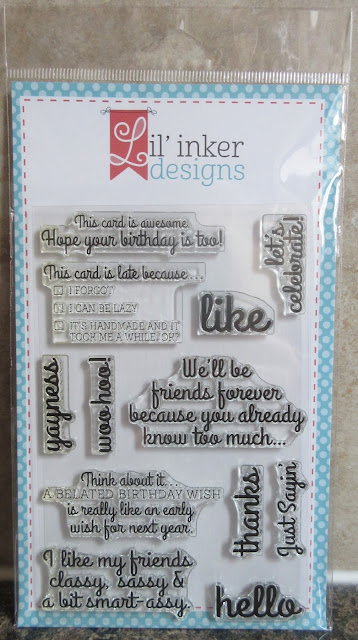 It's 2,000 quarter inch wide paper strips! Joke - tee, hee. In fact, it's a set of Lil'Inker sentiment stamps the same as the one I used today - called 'Just Sayin'. As I mentioned previously, Lil'Inker have closed their business, sigh, but I got my paws on these before they become as rare as hens' teeth.

As always, the Snippets Challenge will run for two weeks and the Playground gates will close at 11am UK time on Saturday 30th May. The gates will open again at midnight UK time on the same day.

No photo of Dudley as I type this on Saturday morning - he's back from his walk and is flat out fast asleep under my desk.

But there have been some developments on the grooming front. Remember that I said that Dudley was sitting up nicely like a bunny rabbit when I groom him and I was beginning to wonder if it was him being helpful or just employing evasive tactics by sitting on his tail and rear end?

Sigh, I think it might be the latter as he's taken to playing hide and seek when we approach '4pm grooming time'. Initially he was hiding under my big corner desk, pressing himself further and further back so that Len has to crawl in to get him out. Next, he ran and hid in one of his cosy beds in our bedroom, curled up pretending to be asleep - if he couldn't see us then perhaps he thought we couldn't see him either. Then he got extra sneaky and we had to really hunt for him - he'd only gone and hopped into his cage which lives behind a door in the lounge! It's so hard not to giggle when he finds somewhere new to hide away - there's never a dull moment with him that's for sure!

Lots of love from us all - Parsnip, Dudley 'aka The Invisible Man' and of course me,