I wanted to make a run of cards, to enclose with the backlog of Snippets Playground prizes which are still here, waiting to be posted off to the winners at some point. I made a run of 10 cards, all the same, using a sentiment stamp which is a great favourite of mine 'Friends are special treasures'. I always think of SaRn when I use this lovely stamp set as I first spotted it over on her blog, a good few years ago now. And also, during this lock down, my blogging friends have become even more precious - if that were possible. Len calls it my 'lifeline to the World' - and he's so right at times.

And once again, I did a bit of cheating. This time with the NBUS Altenew floral border on the cards, see what you think: 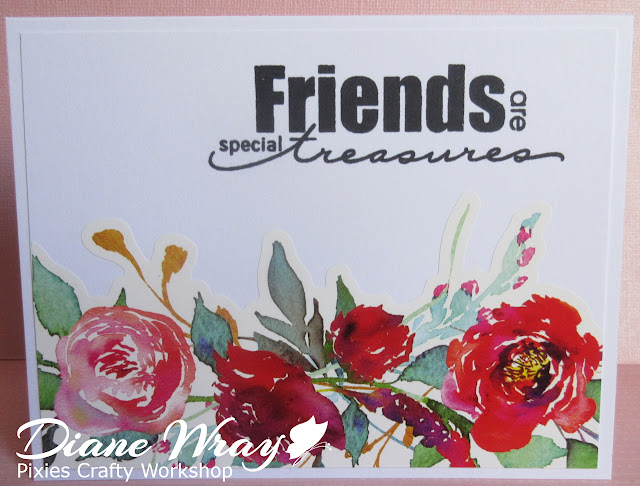 - cut some 6" x 6" squares of card using the same white card (I actually just halved some of the same card blanks I often use to cut down for the A2 size). These panels were destined to be trimmed down further but if you read on you'll hopefully understand why I did this

- and this is the 'cheats bit' - I used a NBUS product by Altenew (bought it from Seven Hills Crafts) called 'Vibrant Spray Die Cut Tape'. Oh boy, how I LOVE this stuff!

- for each front panel I cut a length of the die cut tape approximately 6" long, peeled off the backing and then adhered it along the bottom edge

- next, I lined up the panel in my guillotine so that one bottom edge of the die cut tape would be cut straight across. Just a question of making sure no white card was left showing, whilst keeping as much of the floral design as possible, and plenty of spare card left above the tape

- then I trimmed the sides to 5.25" width and then across the top of the panel at 4". That allowed me a little bit of 'wiggle room' on either side of the panel to line up the edge cuts as well as possible taking the floral pattern into account. Any slightly 'odd' looking tall parts of the design at the very edges can be easily peeled back and trimmed with small scissors to give a more pleasing effect.

- stamped the sentiment onto the panel using the 'Friends are special treasures' stamp from the Hero Arts 'Live Life' set of sentiment stamps, the Misti and another NBUS item, Versafine's Clair 'Nocturne' ink pad (huge thanks to Kathleen for recommending this - it's brilliant!)

- final step was to glue the panel to the front of the card blank - simples!

These really were great fun to make, particularly for a batch making session, and I've spotted an idea for a different design using the same tape. The way things are going it'll be while until I get those packages posted so there will be a few more winners by then and a few more message cards to be made to include with prizes.

I adore the Altenew border, and you actually get 5 metres on a roll, so although the initial outlay isn't exactly cheap, you'll get a good few cards out of it! They have other designs but this is my favourite, I would be thrilled if they bring out one in a Christmas design needless to say.

A couple of things, the Altenew tape border is very slightly 'off-white' and my card stock here is all bright white. I would have hopped into the car and nipped down the road to Hobbycraft for a pack of slightly off-white card blanks - but of course that's not an option at the moment.

I do love the Versafine Clair 'Nocturne' ink pad, it gives such a strong black stamping straight away. However, it's so juicy that you can actually see a faint shading on the reverse of the card, so possible best avoided for one layer cards - unless you sneakily back the inside of the front of the card with a slightly smaller panel of card of course.

Both the above points are purely down to my tendency towards OCD when crafting, this I freely admit!

I'd like to enter this into Darnell's NBUS Challenge #14 May 2020. I love this challenge, so thrilled that Darnell has brought it back. Of course the Altenew tape is my NBUS item, as well as the Clair 'Nocturne' ink pad.

Typing this when I really should be baking. It's too late to begin now so it looks as if I'll be forced to do some more crafting. At long last, I feel as if Mr Mojo is peeking round the door ready to return - I have loads of ideas for Christmas, snippets and other occasion cards racing round in my head! Hooray, it's not before time.