Now this is where I think I dropped a bit of a boo-boo - for three reasons. First of all the prize on offer features reindeer, very soon after Saturday's offering of a reindeer stamp. Secondly, a lot of you actually declined the prize on Saturday, sigh, due to already having your own little herds of reindeer residing in your various places where you craft (that 'herd' cracked me up - thanks April, trust you to come up with that one!). Oh, and April also had the bright idea of us showing our snippets mountains so possibly, in a not too far off challenge I just might ask for that from you instead of an actual 'make' - evil snigger here. And thirdly, I actually bought three of the matching stamp and die sets to offer for this prize (plus my own for making a sample) so this place could end up with a herd as well if no-one wants to re-home them!

Here's my card, which I managed to whip up quickly yesterday, still bearing in mind your lovely comments about possibly not doing sample cards - which I might still use as a fall back: 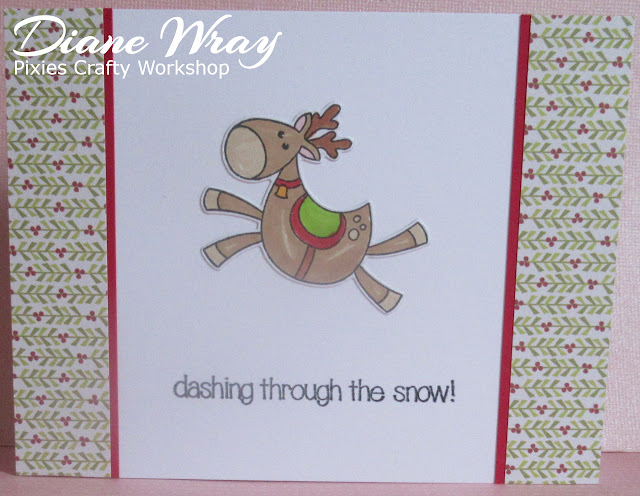 - selected a snippet of paper from those tucked into the back of the Dovecrafts Modern 'Back to Basics Christmas' set of papers, and spied a snippet of SU 'Real Red' card to one side of the desk waiting to be put into the snippets folder so I also used that - didn't trim the paper or card stock but used them at first to match the Pro markers I wanted to use to colour the image

- then stuck the borders onto the card front, trimming off the overlap at top and bottom once they were adhered

There I was wishing we had some sunlight to take photos - we had it at last and my camera didn't like it much as the colours and the sentiment look rather bleached. Hey, ho!

And here's prize I in the Grand Draw: 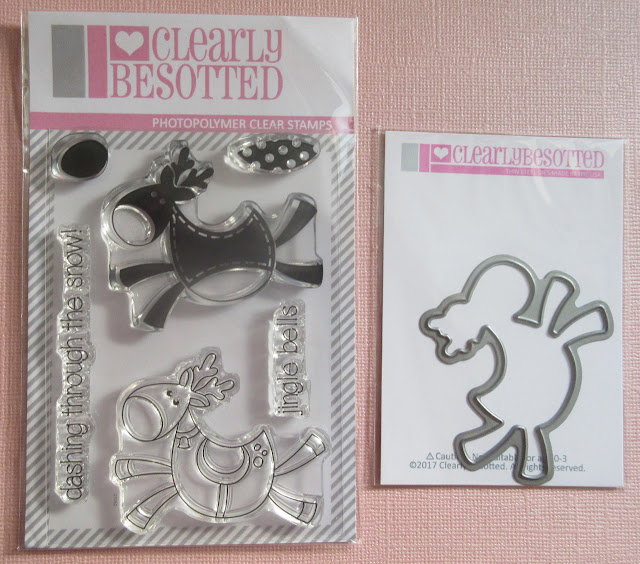 It's Clearly Besotted's 'Jingle Bells' stamps and matching die - and there are three to be won!

I bought the stamps and matching dies a little while ago ready for the Grand Draw - and can't find the exact same ones on Clearly Besotted's website. Looks as if they've replaced them with a slighty different version which is still called 'Jingle Bells', same images but with additional sentiments - although no dies are available. Another time I'll play around more, using the other stamps in the set.

I'll do a massive draw session for all the prizes using the one Mr Linky - which is on the main snippets post HERE along with details of exactly how to join in - so you do need to have entered one snippets make over on that post during this fortnight to be in with a chance :) Maximum of one entry please - to keep things fair for those who may not have time to craft. Mr Linky closes at 11am on Saturday 4th January so you do need to have added a snippets make by then to be eligible for the draw.

It's New Year's Eve tomorrow - we'll be having a quiet time and hoping that the idiots up the road don't let off a barrage of fireworks once again. Dudley grew out of his spell of wanting to sleep wearing his onesie at night but we'll keep one handy as it does seem to soothe him much like a thunder shirt.

He's such a funny little character. He has an evening ritual where he gallops up to his toy box on the landing around 9pm or thereafter and brings 'Stinky Monkey the Third' down for a good wash. Tonight he then galloped back up and brought down part of a deer antler we bought him ages ago. Chewed on that, raised an eyebrow at 'The Trial of Christine Keeler' on the TV - and galloped back up again. By this time Len was in the bathroom getting ready for bed so he didn't see that Dudley had been having a rummage in my waste bin in the craft room and had then brought down part of a torn up envelope for me to admire - and remove from him! Next thing I know, Len wanders down with a handful of pieces of the same envelopes asking what was going on. The little tinker had been laying a paper trail we reckon. Another one of those moments when you look at one another, then at the culprit, then at one another again and just give a wry smile - not a single word was needed!