It's Boxing Day - and to be honest I do prefer the more relaxed pace of today. All I need to do for our evening meal is to simmer our mahoosive gammon/ham joint in Coca Cola - ready to add to some leftovers from Christmas Day, a selection of pickles, poultry slices, pigs in blankets, stuffings - and Brussels sprouts with chestnuts, cut up then mixed with mashed potato and fried as bubble and squeak. We do tend to mix and match all the cold meats etc. for a few days to make life more relaxed.

Yummy - and one little boy called Dudley will be dancing on his hind legs in the hopes of a treat or two!

Len should be at the annual Boxing Day Archery shoot at his local club (waterlogged field permitting). So whilst the ham simmers I'll be bashing on making more samples for forthcoming prizes in the Christmas Draw!

And here's another prize in the 'Snippets Playground Celebration' prize draw: 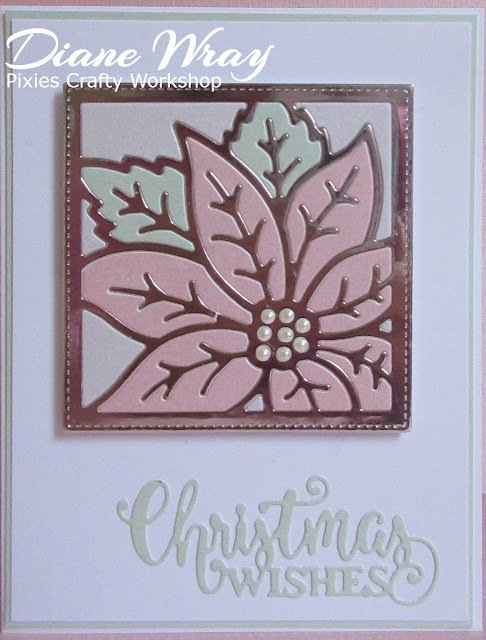 - snippet of pale green pearlescent card, trimmed to slightly smaller than the card front and glued in place

- snippet of plain white card, trimmed to slightly smaller than the pale green layer and kept to one side for now

- I poked all the pieces out of the die cut, leaving just the frame with the flower outline inside it then backed it with a little snippet of white card cut marginally smaller than the actual die cut frame

- to be honest, hindsight being 20/20 vision, I could have so easily not used the Stick-It at all for the flower die and cut outs. Much simpler to have covered the snippet of white card with ordinary double sided adhesive paper before adding it to the back of the die cut poinsettia frame - and probably costing a lot less angst, as well as expense to be honest. But, on I plodded with head still in the sand, sigh

- die cut the sentiment using Sue Wilson's 'Festive Mini Expressions - Christmas Wishes' die from a snippet of pale green Stick-It backed card (now that IS where Stick-It is worth every penny) - lined it up on the front panel and ran it through the Cuttlebug to 'set it' in place. I just used the normal cutting plates, making sure the front of the panel had the unmarked/scored plate against it - ask me how I know this is important - a lesson learnt some time ago. You can also add a single piece of paper on top of the die cut you're adhering to be sure to prevent any 'scoring' marks from possibly having used the cutting plates the wrong way at some point in the past

- added  the poinsettia panel and the sentiment to the card front before adding a few Mei Flower little pearls to the centre of the poinsettia - finished!

The light is so bad here right now, the frame for the image layer and also the sentiment are cut from snippets of exactly the same pale green card as the leaves on the poinsettia itself. I did originally try cutting the sentiment using silver mirri card but it just wasn't working for me so I switched to the pale green. Ha, and you can see my reflection in the silver pieces as well :)

The poinsettia also looks gorgeous in rich red, green and gold of course - but I thought pastels were also a very pretty option. In fact, it's possibly my favourite card I've made this year.

I adore this pretty poinsettia die and sentiment - so much that you have three chances to win. Yup, I bought three of the poinsettia die sets and three of the gorgeous sentiment dies (a further one already appeared earlier fro me as part of the 'Snowman Edger' prize on Monday 23rd). So here's the prize you can play for today - purely by leaving a comment in this post: 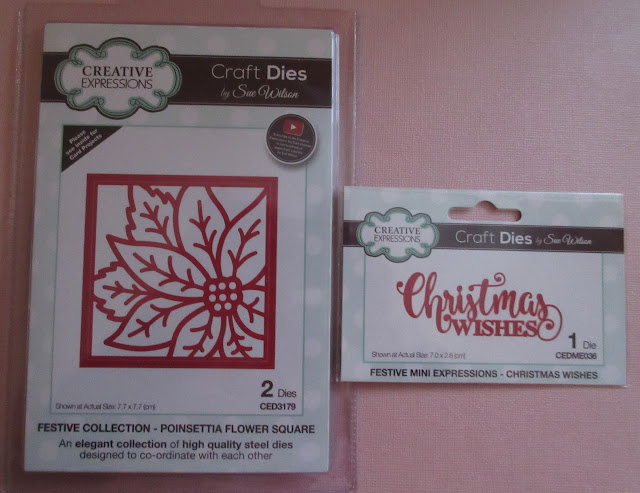 It's the Creative Expressions Sue Wilson 'Poinsettia Flower Square dies (there's an outer frame on this one) as well as a Sue Wilson 'Festive Mini Expressions - Christmas Wishes' die.

At the end of all of the celebrations I'll do a massive draw session for all the prizes using the one Mr Linky - which is on the main snippets post HERE along with details of exactly how to join in - so you do need to have entered one snippets make, over on that post during this fortnight, to be in with a chance :) Maximum of one entry please - to keep things fair for those who may not have time to craft. Mr Linky closes at 11am on Saturday 4th January so you do need to have added a snippets make by then to be eligible for the draw.

Love from Parsnip, Dudley and of course me, just relaxing after Christmas Day here - bliss.


Wo put thag mud od mulled whine there? I thort it woz tea!