Most of you know that we have two Grand daughters living in Germany, on Len's side of the family although of course I love them as if they're my own. Today it's Livi's 10th Birthday, and as always I had to scramble to make her card in time to post. Their tastes change so quickly that it doesn't make sense to make their cards too far in advance - she says, trying to convince herself!

For a good while now, Livi has adored dragons - especially 'Toothless'. I've used his image on a card for her in the past but the other day I spotted a great die, which was here from Amazon in less than 24 hours - and this is the card I made: 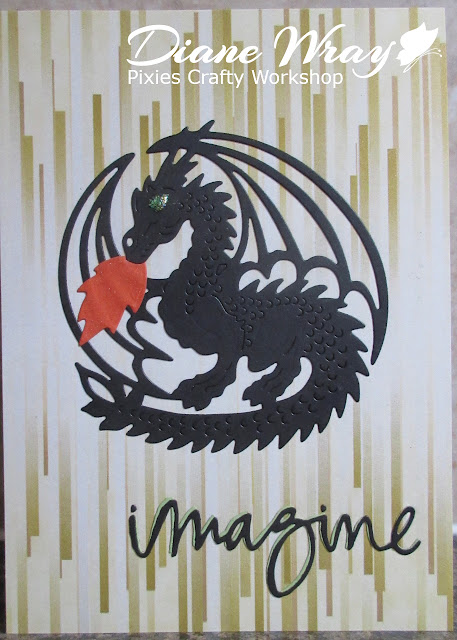 - a sheet of paper trimmed to exactly fit the card front, from Papermania's 'Elegance' paper pack -it's cream with shimmery gold streaks as a pattern - then glued in place

- snippets of black, orange and lime green card, backed with Stick-It for all the die cute

- then die cut the word 'imagine' from lime green card, using the Memory Box 'Sketchbook imagine' die, left the backing in place and set it to one side before then die cutting it from black card

- ran the whole card through the Cuttlebug using just the cutting plates to make sure everything, including those pesky little dots above the letters i were firmly adhered

All done, in two shakes of a lambs tail!

It was all the more appropriate to make a card with a dragon on as Livi's Birthday present from us is an animated model dragon - not Toothless but another one of her favourites.

Whilst browsing for ideas on how the die would look when actually cut, I came across a lovely card made by Liz for the Playground, coming up to three years ago - HERE. It's well worth a look!

Really sorry I haven't managed to skip around commenting on Playground entries as yet. It's been another busy week here - but I'll get round to see you ASAP!