Yesterday one of our young neighbours reached 11 years old. He recently became very grown up and now cycles to and from school with friends. So, of course his card had to feature a bike a bit like his - I know it's orange but haven't really been close enough to pick up more details so had to sort of 'wing' this card: 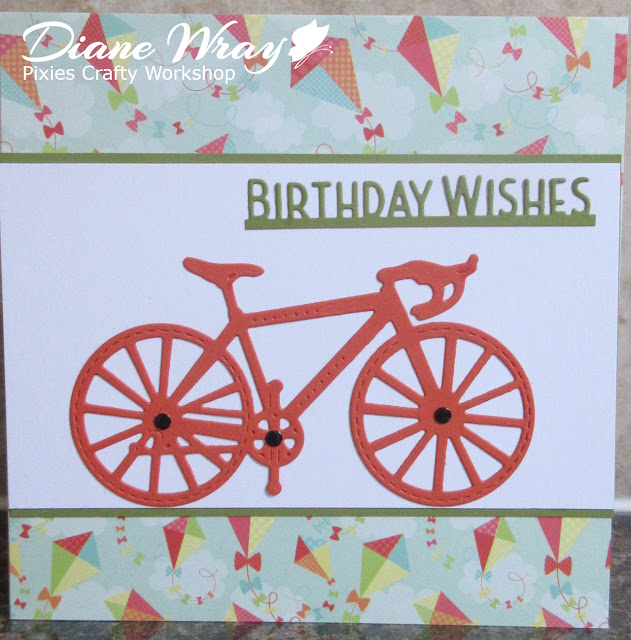 - a whole sheet of paper from a paper stack called 'Let's Fly Away', free with Quick Cards Made Easy back in 2012, trimmed to exactly fit the card front then glued in place

- then trimmed a snippet of white card to the same width as the card front and about 3.25" in height

- die cut the sentiment from a snippet of green card, using a die by Impression Obsession called 'Birthday Top Edgers'. The secret to getting the 'underline' is to place the die just about an eighth of an inch above the straight edge of the piece of card you're using before die cutting the sentiment, which means you don't need to fiddle about afterwards trying to cut the underline itself - glued it onto the white panel using a Zig glue pen

- layered the white panel onto a green panel using Collall All Purpose Glue, which was cut from another snippet of the same green card and trimmed to the same  width as the card front and about 3.5" in height

The 'Racing Bike' die was much bigger than I expected when it arrived - but it's fun to use and makes a bold statement. Little note to self, check sizes when ordering on line!