I did post on Thursday that Dudley is back to normal - phew! What a worry it's been and it's so wonderful to have him sticking his nose into everything. He's eating heartily and his 'system' is back to normal ...... so no need for Len to have to collect the dreaded samples after all! And his weight is back up to 6.4kg again.

We've had torrential rain here, like a lot of the UK has. Several places were flooded and a local cinema had to be evacuated during Tuesday afternoon's monsoon downpour. It's not something we're often affected by but when the rain is non-stop, after a long dry spell, it's bound to cause issues. At least the pathways and grass in our local park had a good 'wash down' which, if Dudley did pick up a bug on one of his walks, should lessen any future risk.

And here's my snippets card for this fortnight, using a set of stamps and dies I've had for a while, but not everything I used to make the card is duplicated in the prize I'm offering: 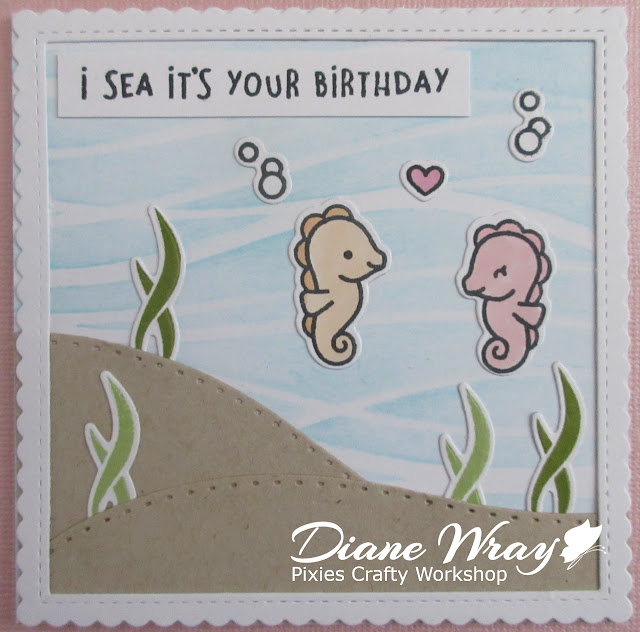 - snippet of white card, 'Broken China' Distress ink pad and Sugar Pea's 'Waves stencil. I used a Clarity stencil brush whilst the stencil was held in place on the piece of white card

- then die cut a couple of snippets of Neenah 'Desert Storm' card using a stitched edged die from Spellbinder's 'Curved Borders One' set of dies, trimmed them and added them to the waves panel to depict the sand dunes under the sea - deliberately using a tape runner (the reason why is further down)

- next added the white scalloped frame using narrow red line tape, so that was the background piece all sorted out

- next I stamped the sentiment, seahorses, bubbles and a heart from the Lawn Fawn 'Sea-Horsin' around' set of stamps onto another snippet of white card using Memento 'Tuxedo Black' ink

- the seaweed is a solid stamp so I stamped four of the clumps using a couple of quite old, small, square SU green ink pads (Certainly Celery' and Old Olive')

- then it was just a case of building up the little scene and adding the pieces using a glue pen. Having just used a tape runner on the little 'sand dunes' meant I could carefully lift them to tuck bottoms of the seaweed underneath - bit of forward thinking for once!

And the prize this fortnight is: 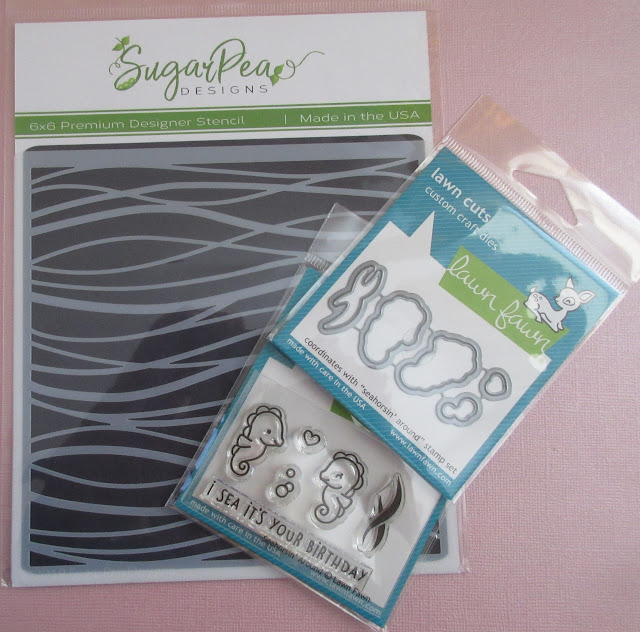 A Lawn Fawn 'Sea-Horsin' Around' set of stamps with matching dies - plus a Sugar Pea 'Waves' stencil - and all items in the photo make up one prize.

I'm sure most of you know that I stopped the option of splitting prizes a while ago  - which makes life easier and also helps to save some postage. But, a couple of very sweet people have said they were playing just for fun as they don't live in the UK. All prizes that I offer will be posted to anywhere in the World folks and I would hate for anyone to feel they shouldn't play along purely through living in a different country. This Playground is our 'happy place' and you should play for prizes if you want to win them, regardless of where you live.


As always, the Snippets Challenge will run for two weeks and the Playground gates will close at 11am UK time on Saturday 12th October. The gates will open again at midnight UK time on the same day.

Remember, if you link into the Playground and don't say clearly that you want to be in the draw in a comment on here, then you will be bypassed if your name comes out of Mr Linky. I'm sure you all know I ask for a positive 'yes' on the blog post itself - just in case you're only playing for fun - otherwise I don't add you to my little list. I sometimes spot people saying in their blog post that they're playing for prizes but am afraid that I ignore that. As Scrappy Mo says over on her Rudolph Days challenge, it's not a lot to ask for people to leave a comment on the challenge blog post itself if they wish to be in the prize draw.

And finally, since his recovery, Dudley seems to have taken up smoking big fat cigars: 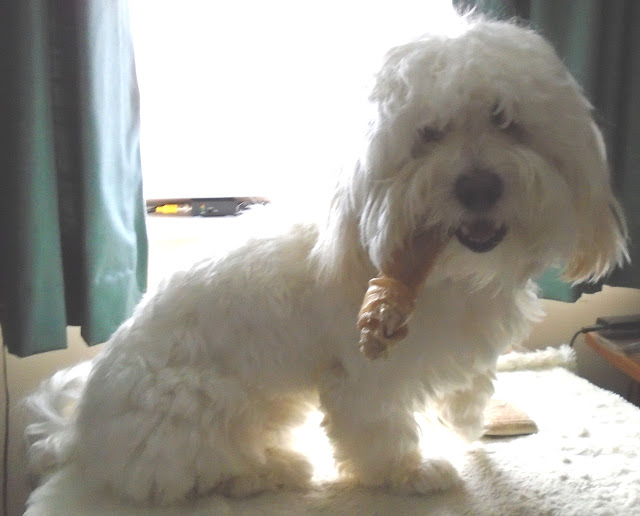 He looks a bit like Dracula here - I think his fangs look a bit scary! And yes, that is a hide bone chew. We know there are very mixed opinions about them but even before we had him from the breeder he was keen on them. We're very careful to remove any small pieces he manages to chew off as well as not leaving him alone with a hide bone chew. And to be honest, even when you do everything by the book as we did with Advantix, absolutely everything you can give to a dog has both good and bad reports. He loves them, and to us it showed how well he'd recovered when he finally became interested in a chew again.