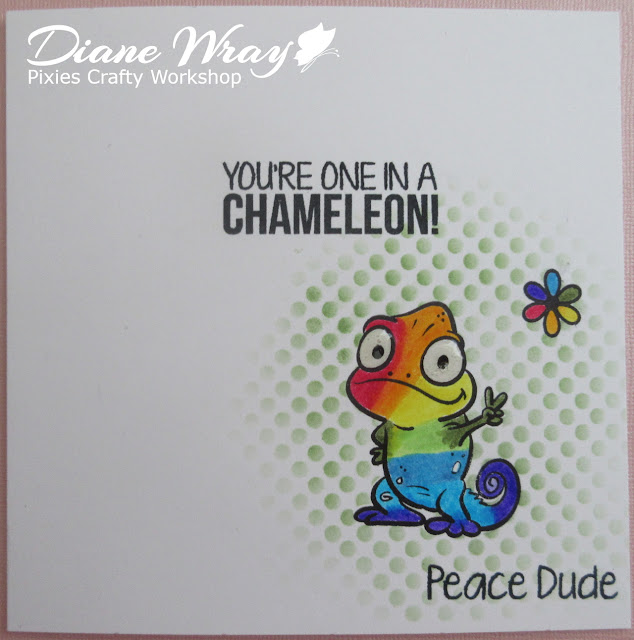 OLC are so hard for me, I always make a mess at the last moment. I love your little chameleon, he's adorable :)

Fab make and a super image too - always great to use Darnell's NBUS isn't it? Perfect make for the spotty LIM challenge

I love this cute little chameleon, such a wonderful card.

This brought a smile to my face Di! Love it. x

I love this card. This is a cute 60's 70's chameleon. The sentiment is great and I love that he's giving us the Peace sign. Oh, I really love this. [Bunny]

Ha ha, love this little fella and the colours you've made him. A fabulous cas card x

Yay! It's lovely to see you back at Less is More Di - we've missed you! Fab card! The colourful chameleon is so cheery and his glossy accent eyes are a brilliant touch. Great use of the spots theme too. xx

Your card is just adorable!!!

Awwww... This rainbow chameleon is too much cool!!! :D :D Absolutely LOVE him!! :D
You have created a fantastic CAS, the stencilled piece of background looks just perfect and the little flower and the sentiment are fabulous details!!
A gold star!! :D

Awww Di this is just so lovely and creative too x

Your card really made me smile, Di, I just love your cute little chameleon! Fabulous card and perfect for the LIM challenge. xx

This is so darn cute! Loving the rainbow coloured critter and the way you did the eyes!

Sometimes one has to have a good giggle to get thru the day...this card gave me mine.

Taking life day by day at the moment. Quite a bit more sore and tender on physio days but no pain, no gain, as they say.

It is a slow road to regaining all the stretch and bend you should have in your knee, dven more so the longer you waited for surgery.
I am paying the price of turning down my surgery dates a few years ago when my Mum was ready to pass.
I turned down 3 or 4 spots over about a 4 year period as I wanted to be there for her when she needed us.
As you limp more to deal with your knee pain, you have those weak muscles to regain as well.

I am looking forward to visiting England again and actually getting out to walk, shop and sightsee.

This card is making me smile. It's great!!!
Lia xx

What a fun and fabulous card Di
Blessings
Maxine

That chameleon is super cute Di and I love the multi colour look and the stencilled spots in the background look great, a really fun make! x

This card makes me smile from ear to ear Di! I love it! So cute, so CAS and so fine. The bright colors makes it so happy feeling and dang if the chameleon isn't the cutest. Loving those polka dots too! Hugs, Brenda

Oh it's great to see you at Less Is More, and this is just so perfect for our challenge. I love this little guy and how fun that you did him in rainbow colors. Love the spots in the background and the sentiment is perfect! Thanks so much for playing with us!

Oh my goodness! This is the cutest thing! Great work!

I was away on vacation but am back now and hoping to get crafty soon! Have a good day!

OMG - this is too cute!! And so wonderfully designed. I don't mask very often myself - you did an excellent job!