Today is 'Mothering Sunday' here in the UK - dating back to when young girls and boys in service were given the day off to go home and visit their Mothers, most likely taking a bunch of Spring flowers with them, picked from the hedgerows nearby. In fact, the term Mothering Sunday dates back to centuries ago when people returned to their 'Mother Church' for a service on that day. Of course, it's now more commonly referred to as Mother's Day, but I still like the term 'Mothering Sunday'..

And, the clocks here also changed - at 2am on Sunday they 'Spring forward' by an hour meaning we lose an hour's sleep but that the evenings will suddenly be lighter of course.

Lets get right on with my snippets card - it's a fairly plain one but took longer to make than I expected. One of those ideas you have in the early hours of the morning when you can't sleep - so it was made early this week! The main thing driving me was the idea of how to match up the die cut sentiment with the background paper: 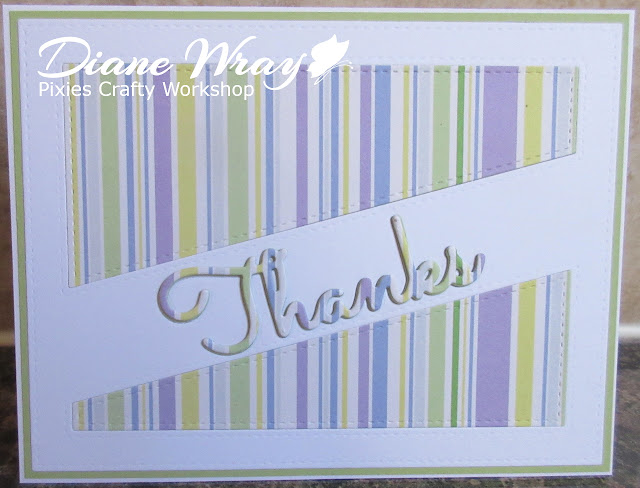 - so, I put the patterned paper die cut on top of the white card die cut, lined them up, held them in place on the cutting mat with low tack tape, put the Impression Obsession 'Thanks' die on top and ran them through the Cuttlebug - and that was why I'd used just 200gsm card, in case I was asking too much of the Cuttlebug in terms of thickness

- it worked just fine - no cogs and springs taking flight!

- by now I had four little sentiments so I popped the white one back into the place on the card where it had come from, holding it in place with normal sellotape at the back, then layered two green sentiments and finally the striped sentiment on top for dimension using a fine glue pen. Note, it's important to make sure you have the inner parts of the letters on the white layer

- next, glued the green background layer to the card front and glued the white panel (complete with sentiment) on top

- finally popped the striped pieces of patterned paper in place  - a perfect match to the sentiment, even if I say so myself!

And of course, the prize this fortnight is this: 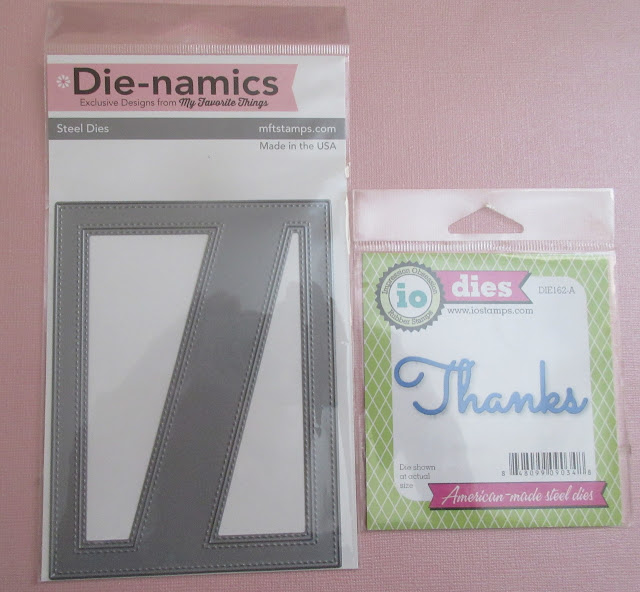 I have offered the same MFT 'Stitched Diagonal' Cover-up dies previously, but I just think they're such a useful die to have that I added a further one to the Toy Box a few months ago, really with the Grand Draw over last Christmas in mind. It didn't get offered but it goes so well with this sentiment - which of course is the Impression Obsession 'Thanks' die ............... on offer as well!

The prize is both items, but this time I would split them as I know that a few of you already have the Diagonal cover up die. This is very much an exception of course! Just say if you want to be in the draw for both dies, or state which one of the two you would like to win - and we'll take it from there.But, as I always say, you can play for both and give one item to a friend if it's a duplicate or you really don't fancy it.

As always, the Snippets Challenge will run for two weeks and the Playground gates will close at 11am UK time on Saturday 13th April. The gates will open again at midnight UK time on the same day.

Remember, if you link into the Playground and don't say clearly that you're wanting to be in the draw in a comment on here, then you will be bypassed if your name comes out of Mr Linky. I'm sure you all know I ask for a positive 'yes' on the blog post itself - just in case you're playing only for fun - otherwise I don't add you to my little list.

Before we get into the latest frivolities here, I have to tell you some sad news - our very much loved, and talented Jenny Lawrence's husband passed away on Friday morning. They were such a very happy couple, finding love 'second time around'. Our thoughts are with Jenny and also her family right now. So very sad and also sudden - we send our love and sympathy Jenny. x

Dudley continues to keep us on our toes here! The latest thing we've had to contend with is that the hedgehogs spook him if he happens to go out for the toilet when they're around. And a little dog with a big woof in the early hours of the morning isn't gonna win him many fans. Havanese dogs have quite a deep bark, which always sounds as if he should be a much bigger dog - until you see him.

Clever Len found a hedgehog garden ornament in an attempt to get Dudley used to seeing at least the shape and colour of a hedgie - but without the smell or any moving around sadly. Over time, he's getting more used to Art (the ARTificial hedgie!) and the other day went so far as to give one of his favourite doggie chews to Art - who of course didn't move a muscle. ☺

Then, later on that day Len managed to take three photos of Dudley cosying up to Art - and this is the one I like the best: 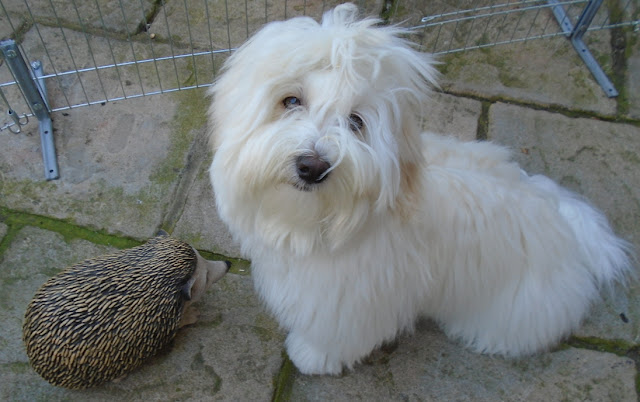 The look on Dudley's face almost says -' You really must think I'm stupid, of course I know he isn't the real thing!'

Dudley was looking a bit grubby after we finally let him out into the main part of the garden once various borders were 'Dudley-proofed' (he loves to dig, even just at grass). So on Friday we felt he really needed a bath so it was all hands on deck here. Cleared one end of the bathroom - and Len brought up a spare garden chair for me to sit on beside the bath, plastic so it didn't matter if there was a deluge.

First of all, Len filled the bath, quite shallowly as we mainly used the spray attachment - and this photo makes me really smile - the little innocent, with no idea of what's to come. 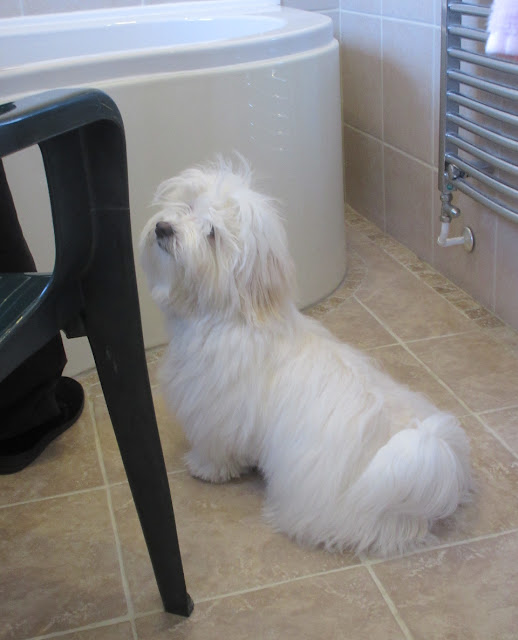 Ha, Dudley soon found out what was going on: 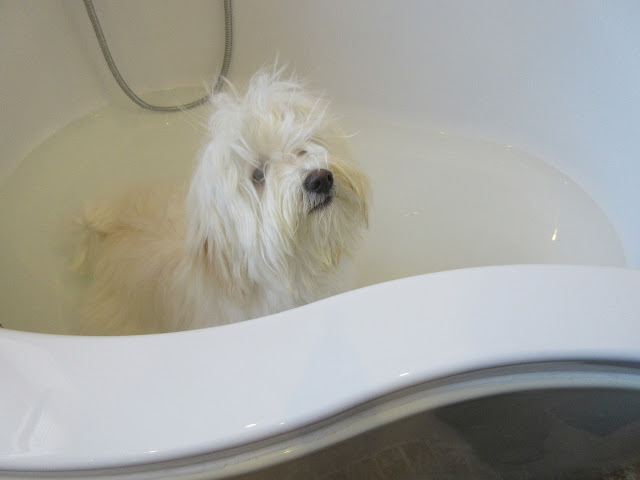 WHAT?!?! You mean I have to sit IN HERE where it's wet and be rubbed with shampoo all over - this IS a joke, right? Let me out - right now - or I begin to do my Havanese yodel performance!

I did giggle when Darnell remarked on Facebook that he had 'a bed head' - that's because I took his topknot out and gave him a thorough brushing right through before the wet stuff started! Len wouldn't let me take his photo when he was soaking wet as it seems undignified somehow - but there's a very small dog underneath all that hair!

We were drenched, although the bathroom wasn't flooded at least. Then came the drying and more brushing, plus a new topknot - and he was good as new, smelling lovely and looking as gorgeous as ever! And all three of us were totally whacked!

Lots of love from us all - Parsnip (quiet these days, but  has a business on the side selling photos of Dudley!), Dudley and of course me -