Mid-afternoon on Monday I realised it's a friend's Birthday later in the week and Len would be passing a post box on Tuesday so he could post it for me. Huh, we both looked right through the box of made up miscellaneous cards here and not a single one was suitable! That's a lesson - must try and make a few to have as standbys.

Whilst being laid up I've been browsing on line a lot and came across a really pretty sheet of Penny Black Stickeroos I'd not seen before - and thankfully the packet had arrived and was sitting there on my desk, certainly saved my bacon!

This is the card I made straight away at top speed, using just one of the stickers - the sheet has four large ones  a really lovely pink stem of flowers, three with beautiful poppies and two other small ones - one is poppies and the other a butterfly), dated 2016 so not all that old as I'd thought PB stopped making them a while ago: 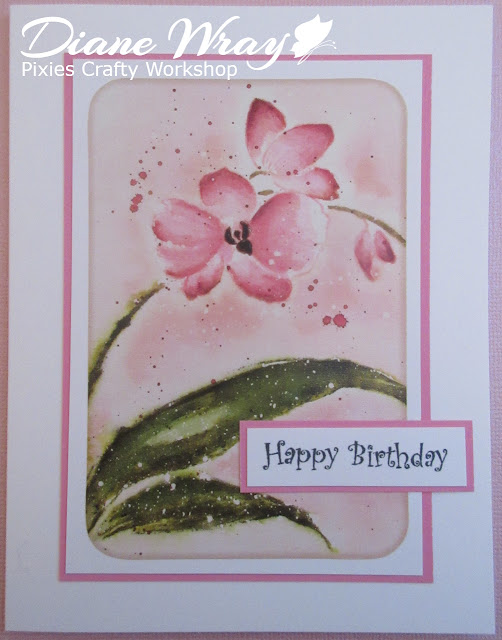 - piece of the same shade of off-white card onto which I stuck the Stickeroo (from the 'touched by love' sheet) before then trimming it down to the size I wanted. You get no second chances with Stickeroos if you make a mistake!

- the sentiment was stamped using Memento 'Tuxedo Black' ink onto a leftover snippet of the off-white card then trimmed down and backed with a small piece of the pink card. The sentiment stamp is from a set I use when I want a small font - it contains 22 different sentiments, made by Personal Impressions, called 'Everyday Words Happy Birthday', designed by Lindsay Mason. Not sure if it's still available to buy as I've had mine for many years - but it's a good all-rounder as it covers a lot more than just Birthdays

Then I wrote the card, stuck a stamp on and breathed a huge sigh of relief - before toddling off to rest up a bit more.