The photo of my snippets card for today isn't very good I'm afraid. We had days on end of really dull and overcast weather with rain thrown in for good measure, then I was at the point where I really needed to take a photo before delivering this card to be taken to the wedding from Len and I by a friend of the bride. So what did we get when I rushed to take the photo? Blinding sunshine and bouncing light all over the place! Sigh - these things are sent to try us!

Anyhow, here's my snippets card for today and the inspiration for it came from an Anniversary card made by our Janice HERE. This is my version, which I made as an easel card: 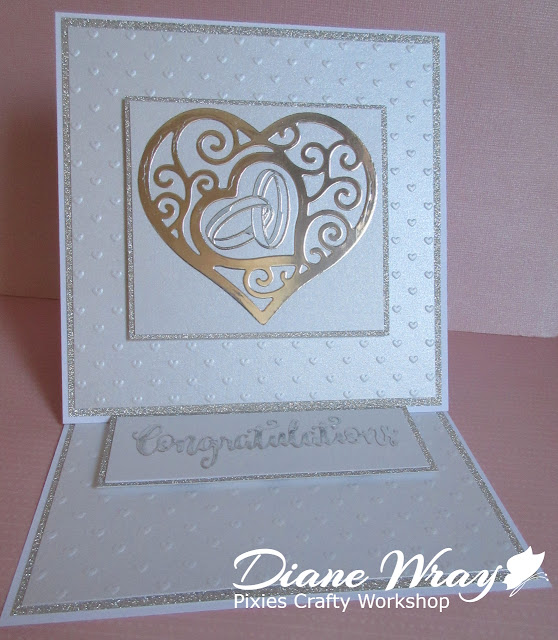 - snippets of silver mirri card for the heart and sentiment and snippets of sparkly silver card for all the borders. I went for more sparkle as it's an
'almost Christmas' wedding and I know that the bride has chosen Christmas music for the church blessing and no doubt there will be other festive and sparkly touches

- topped those with a background layer of white pearlescent card which was embossed using XCut's 'Polka Hearts' embossing folder - there had been a fair old bit of measuring up and careful trimming beforehand I can tell you!

- then die cut and assembled the sentiment strip (which acts as a 'stop' to hold the card upright) using another lovely die, so kindly given to me earlier this year by a very sweet friend (you know who you are!) - the die is called 'Congratulations' and is made by Creative Expressions

- and then I added the image panel and the sentiment panel using reasonably thick sticky pads - and popped a pair of linked Wedding rings into the centre of the heart - hooray for peel offs!

The card took me almost two days to make, I kept being distracted by little Dudley and made a few mistakes along the way which meant I had to re-do bits. For instance, embossing one piece of pearlescent card on the reverse (shame it wasn't double sided pearl but there you go!) - silly little mistakes as I wasn't really concentrating. In real life the card looks very special though and I'm well pleased with it, I made up a box for it as well. I really dithered about personalising it with the bride and groom's names - but in the end opted for keeping it less cluttered.

The prize, as usual, is totally connected to this week's snippets card: 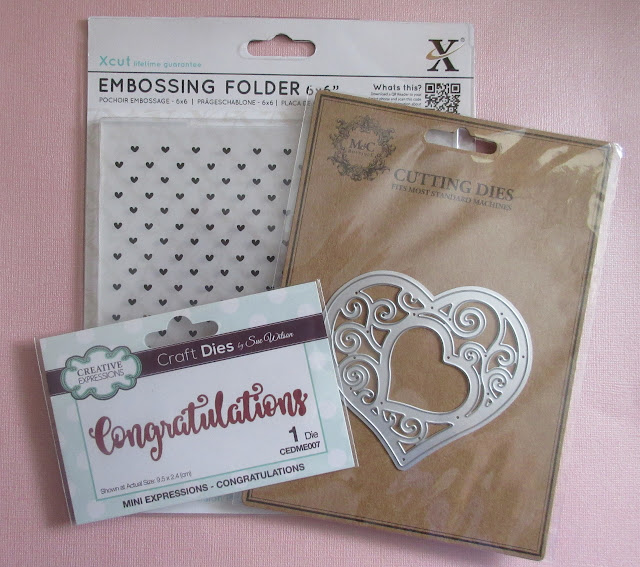 It's an Xcut 6" x 6" 'Polka Hearts' embossing folder, a The Works 'Swirl Heart' die and a Creative Expressions 'Congratulations' die. I do so love The Works dies - considering they're pretty inexpensive they cut beautifully, come out of the dies with ease and are well made and robust.

A nice bumper bundle and I won't split this prize at all. As I always say, if you win and really don't want everything (although they go together so well) then feel free to give anything away to a fellow crafter at your end.

As always, the Snippets Challenge will run for two weeks and the Playground gates will close at 11am UK time on Saturday 22nd December. The gates will open again at midnight UK time on the same day.

In two weeks time we'll all be in panic mode I expect getting ready for Christmas! But, do try and find time during the following fortnight to make and link a snippets make into the Mr Linky which will publish on 23rd December as most (if not all) days I'll be adding prizes into the pot for the Grand Christmas/New Year Draw! You will need to comment on any post showing the prize for that day if you wish to be added into the draw for that particular prize. One overall comment saying 'all prizes' won't cut it I'm afraid. Neither will racing through all the posts right at the end commenting on all the prizes be very fair - and it will show up on my dashboard. I know we're all going to be busy so I will allow some leeway of course.

I'm finishing this off on Saturday morning (ie. yesterday). It's been a fun week for Dudley and tonight will be a real test as I'm going to the Archery Club Christmas Quiz evening with Len. To be honest I'd rather stay at home but we do need to see if Dudley can cope with an evening in his indoor pen - along with bed, food, water and toys of course. Plus the radio will be left on for him to 'sing' along to! In fact, his sounds vary immensely and he almost yodels at times. I feel so bad that we have to try this but Len has rigged up an indoor CCTV camera so we can monitor him from where we'll be. And who knows, it may go well.


Yesterday (Friday) for example was a case in point. I got myself into a real tizz as Friday got closer and Dudley was being left alone at the groomers. He trotted into the main store quite nicely but was hesitant when we went into the 'grooming parlour' and he positively backed into a corner with his paws firmly dug in when he needed to be handed over to the girls! However, one worrying hour later I returned to collect him and guess what? He'd been an absolute angel throughout - hardly a murmur from him and the girls had fallen in love with him of course. In fact, the little scamp just gave me a glance and carried on licking the girl who brought him to be handed back. So much for a frantic little dog scrabbling to get back to 'Mum'! In loads of ways it's really heartening that he's not as fazed by these things as we thought he might be. And, he looks (and smells) utterly fabulous! He's fast asleep right now and with this evening in mind it isn't fair to disturb him to take a photo. Just think very white and fluffy with a coat that feels like spun silk :)

Hope you all have a lovely week/fortnight. And remember, if it doesn't get done before Christmas, things will still carry on so try not to get into panic mode with preparations. She says - being the world's worst! I actually have a list which lists all my to-do lists here!

Love from Parsnip and myself, and of course a 'woof' from Dudley ☺

Edit: Dudley coped amazingly well! He looked as if he was doing well on camera when we spied on him from the quiz venue. He was 'all of a quiver' when Len went into the house whilst I parked my car  - whether it was excitement at seeing Len or he'd been a bit stressed as the evening wore on we're unsure, but to be honest that little chap is proving to be tougher than we thought. Lots of play time and snuggles and he's absolutely fine!!