Merry Christmas - hope you have a wonderful day! My card for today is actually Len's Christmas card, I managed to make it whilst he was out at archery last week - in a bit of a rush but I like the result anyhow: 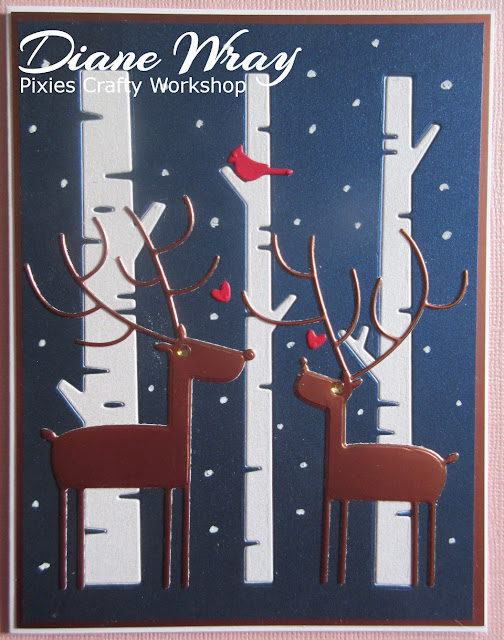 - a layer of copper coloured matt/satin finish mirri card as a frame, glued in place

- a snippet of dark blue pearlescent card, trimmed just an eighth of an inch smaller all round to go on top of the copper layer of card later on

- then I used the gorgeous Lawn Fawn 'Birch Trees' set of dies to cut three birch tree apertures in the blue layer of card, and also die cut three of the same trees from a snippet of white pearlescent card

- turned the blue layer over and stuck strips of normal sellotape down the trees, one at a time, flipping it over and carefully inlaying the white birch trees (had to be really careful as the fattest tree has a couple of teeny cutouts in the centre of the bark so I kept two little blue pieces of waste to add in afterwards

- stuck the antlers (first!) plus the deer in place and at least I had the basis of a card at that point! The little noses die cut separately so i also added those, using the same copper card

- final touch was a little red cardinal (from the 'Birch Trees' set) and a couple of tiny hearts (from the 'Deer Love' set), cut from a Stick-It backed snippet of red card

I'd already decided not to add a sentiment to the front of the card - it really speaks for itself. I kept the slushy stuff for inside :) I prefer the eyes to be black but the smallest gems I have are gold and to be perfectly honest I was in a bit of a 'hampered hurry' so didn't stop to colour them with a black Pro marker before setting in place. I was using one hand to pet Dudley and the other to craft with!

I first spotted this super reindeer set over at Emma T's blog when she came to play with us for the first time and shared this card: 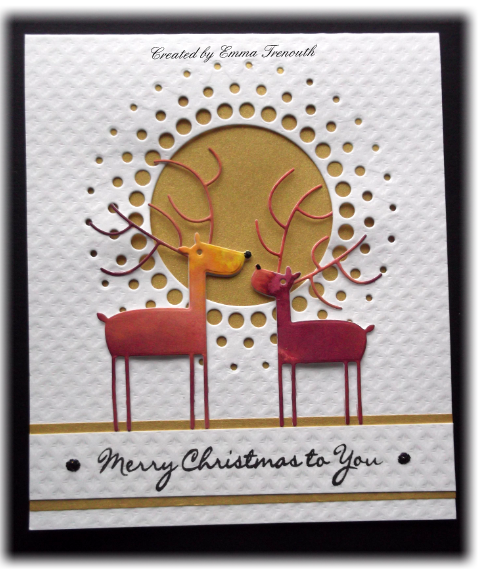 LOVE the design and will certainly be CASE-ing it before too long! Especially as I rarely use my own (the same) wonderful circular background die!

I had a casualty though when making my card. The die for the incy wincy cardinal flew (literally!) out of my hand as I was taking the die cut out of the die. I could almost swear I heard it drop onto the floor but both Len and I have searched and used magnets in an effort to retrieve it - no luck as yet. I rootled right through the waste bin - watched longingly by Dudley who would have loved to have given a helping paw. Sigh, it'll no doubt turn up - and thankfully Dudley is wise enough not to chew or eat anything metal. Poor Len couldn't be told exactly what he was looking for either as it was his card! Basically the other option is that it plopped in amongst some of the piles of stuff on my desk - which will be cleared away after Christmas - so I do hold out some hope of finding it. Eventually.

And of course you want to know what today's prize is: 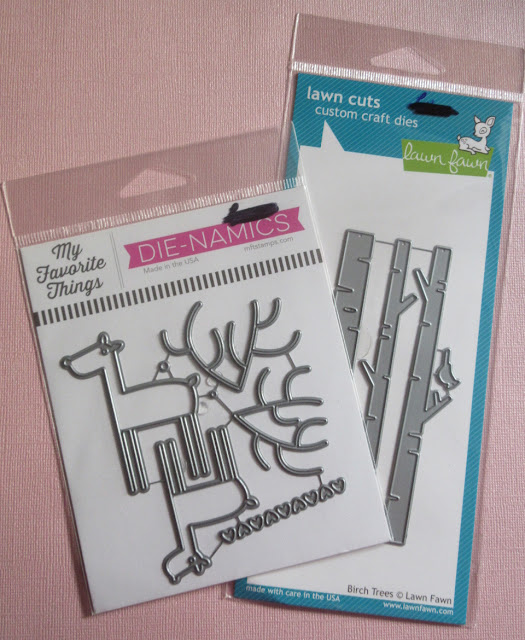 It's the MFT 'Deer Love' set of dies as well as the Lawn Fawn 'Birch Trees' set of dies - same as I used for my own card. The red cardinal is still firmly in place! If you win then I'd advise not detaching the cardinal unless you want to use the birch trees for inlaying of course - which means they had to be snipped apart.

Just leave a comment on this post if you would like the chance to win today's prize. I won't be splitting it but do feel free to play and give part away if you win!

It's 9:30 pm on Christmas Eve and we're about to snuggle up with an old favourite film, 'Polar Express' on DVD ....... in bed. Everything is prepared for the big day, as far as it can be. Whew, all done within a gnat's whisker! The only issue is no white wine for a spritzer for me whilst cooking tomorrow - so it will just have to be a champagne spritzer I guess.

Ahem, little tinker Dudley learned a new trick earlier this evening - how to jump up onto a sofa on his own ................... then lie down and take possession! Len hasn't seen it happen yet - just that when he left the room and a still warm and vacant sofa, Dudley looked at me and am sure he winked before doing a couple of hops and then there he was up and all nicely settled! Not once, but twice for good measure ☺

Love from Di, Dudley and darling Parsnip of course!