And it's Boxing Day already in the UK! Time for another Christmas/New Year 'Snippets Playground Celebration' prize - and it's a bit of a bumper bundle again: 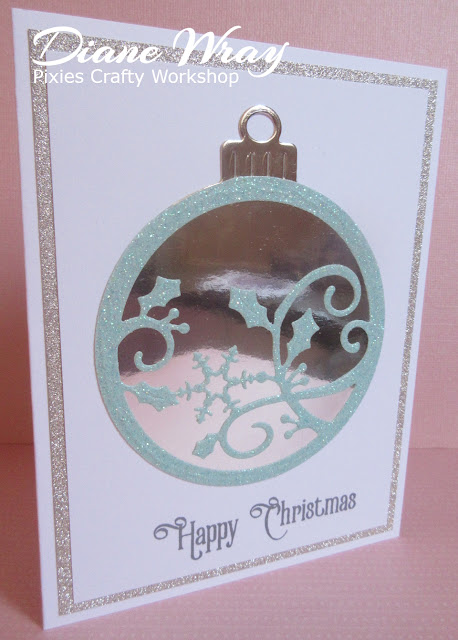 What a nightmare to photograph! This is the best I could do without hanging by my toes from the ceiling light fitting. As we know, mirri card picks up reflections beautifully - it's a shame that by turning the card to one side to lessen that, the gorgeous sparkle doesn't show too well. Trust me, it's there!

- a layer of sparkly silver card as a frame, glued in place

- a snippet of white card, trimmed just an eighth of an inch smaller all round to go on top of the sparkly silver layer of card

- then glued the white panel onto the sparkly silver one

- then I used both dies together to cut the pretty top layer from a snippet of XCut 'Adhesive Glitter Sheets - Pastels'.

- snipped the top part of the bauble from the glitter layer before placing it onto the plain solid silver mirri card bauble, turned it over and pressed/rubbed the two layers together with the flat of my hand. Didn't want to run it through the Cuttlebug in case I lost the bit of embossing on the silver piece at the top of the bauble

- then just glued the bauble in place and that was one of four card done - I made three others at the same time using different coloured snippets from the same pack of XCut glitter sheets. This one in turquoise as well as one lilac, one pink and one green.

As I already said, in real life this card sparkles so beautifully - I'm typing this late in the evening before Christmas gets under way and under just the light from a single desk lamp it really does look very pretty, which leads us into today's prize: 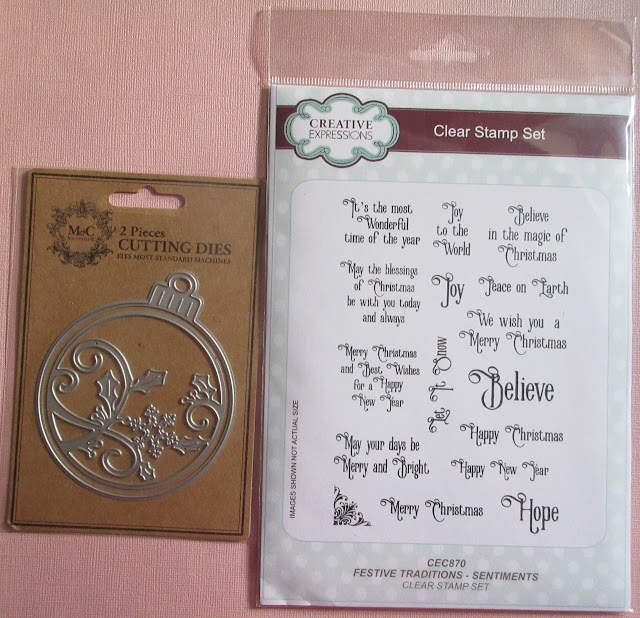 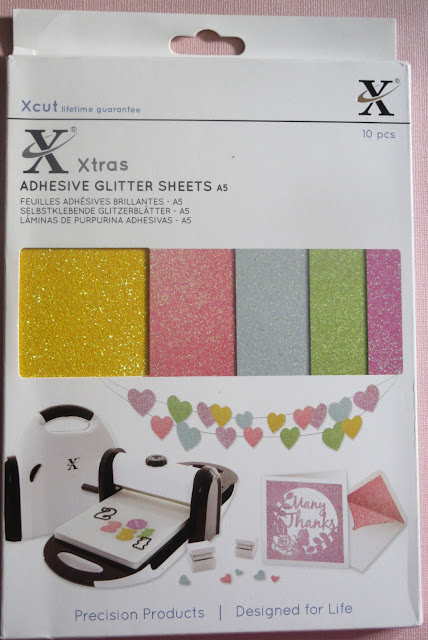 It's a set of two dies from The Works (Bauble 2-piece), a set of sentiment stamps by Creative Expressions called 'Festive Traditions - Sentiments' AND, a packet of the XCut Adhesive Glitter Sheets - Pastels (there are ten in a pack, two of each colour). These sheets are so pretty they can be used all year round. One tip, after die cutting a shape from the adhesive glitter sheet, is to peel off the backing before removing the 'waste' - the waxy backing sheet is very sturdy so it makes life easier to remove it first after doing the die cutting and then take the waste away from the die cut, which will be cleanly cut right through.

Just leave a comment on this post if you would like the chance to win today's prize. And a reminder that I won't be splitting this prize - but of course you can still play and give away what you don't want to a friend at your end!

Edit: Hope you all had a lovely day yesterday and that Santa was good to you. Our little Dudley was the focus of attention and presents here - so much so that Santa had to bring him a really cute Doggie Toy Box as well! Phew, at least that should reduce the risk of breaking an ankle stepping on one of his less squishy toys! Parsnip played Master of Ceremonies and handed Dudley's presents to him one by one ............. before carefully disposing of the wrappings! Having said that, we've kept a few items back for fear of overloading him with too much at once so he'll get a few more over the coming days. The star of the show for him is an Armadillo made of plush material and cord - which instead of squeaking emits a sort of loud grunt. It's absolutely brilliant! And, after we'd eaten and had settled down to watch a bit of TV - Dudley carefully brought each new toy one by one to show me and then trotted back with it to collect another one and do the same all over again. Almost as if he was saying a thank you! Bless him, he's shattered and right now is fast asleep - we're not far behind him either!