I whipped up a further four Christmas cards, all the same, to keep up with the self-imposed target of 12 per month from the beginning of December through to the end of November. I'm now halfway there and managing to keep up - so far! 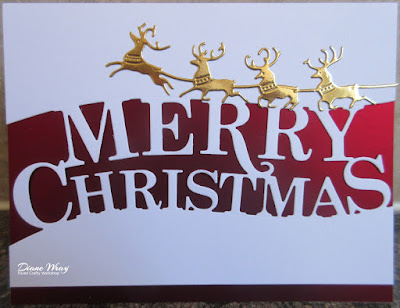 - piece of deep red satin mirri card, cut to the same size as the card front and then glued in place

- piece of plain white card, cut down to 4" x 5.5" so that a band of the red layer would show at the bottom of the white panel (bit hard to spot in the photo but it's there I promise)

- peeled off the Stick-It backing from the reindeer and positioned them so that only the reindeer were on the card with the sleigh hanging off the edge. I then trimmed the sleigh itself off the side of the card - leaving just the reindeer 'cantering or flying' across the top of the word panel

Shame on me, I bought this word die months ago and had forgotten all about it! I had spied a card very similar to this one on some Memory Box adverts for the word die. It had sparkly snow added underneath the word 'Christmas', using what looked like white Flower Soft. I had the materials but skipped that bit as it seemed just a bit too fussy to me. Ditto with adding a red gem to the leading reindeer's nose - my red gems aren't tiny enough and Rudolph would look like he had a red traffic light as a nose :)