Wahoo, it's the first Rudolph Day since November over at ScrappyMo's - and the prize is a beautiful Memory Box die. To join in the fun you just need to make and enter one Christmas card or make (I'm showing more here purely as I did a 'batch baking' session) and the challenge runs from 25th to 31st January. A great way to get a head start on cards for this coming Christmas :)

I had loads of little Taylored Expressions 'Critters on Ice' when I did the mammoth stamping, colouring and die cutting session shown HERE on Friday of last week - and these are the other cards I made, seven of them in total, all on a similar theme: 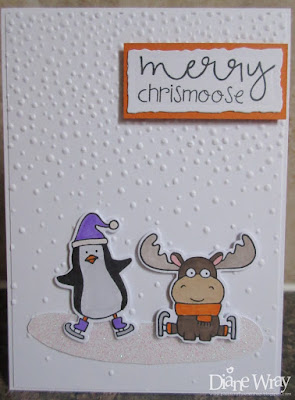 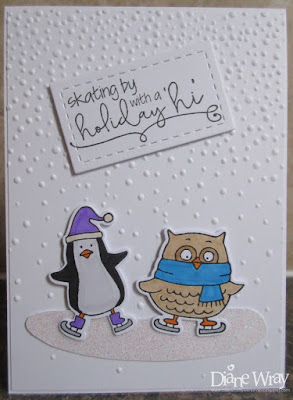 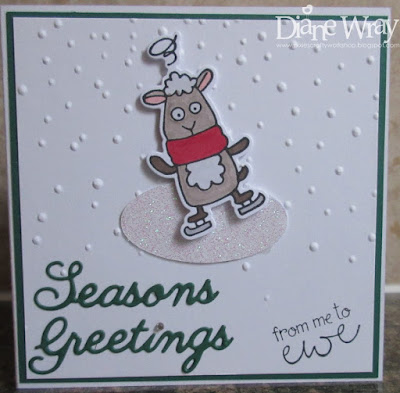 They're so similar that I'll keep the details fairly generic - well, as much as I ever can!

- topped with white card stock, embossed using the Stampin' Up embossing folder 'Softly Falling', the 'Ewe' cards had narrow frames of dark green card added behind the white layer (from the snippets folder)

- next I stamped the sentiments using Memento 'Tuxedo Black' ink onto snippets of white card and die cut some using a Lil' Inkers 'Stitched Rectangles' die, others using a Spellbinders 'Distressed Edges' die (backed with little oblongs of orange card) and fixed them onto the cards using thin sticky pads

- finally the little 'critters' were added using thin sticky pads (details of how I coloured and then die cut them are on last Friday's post).