We knew that our neighbours' new baby had arrived but, to use Len's expression, we didn't 'know what flavour'! So, rather than put one or two feet firmly in it - I was chivvied/nagged encouraged by himself to make a 'gender neutral' card. And of the three options we'd ended up with (boy, girl and neutral), the in-house critic liked this 'neutral' one the best - so all's well that ends well: 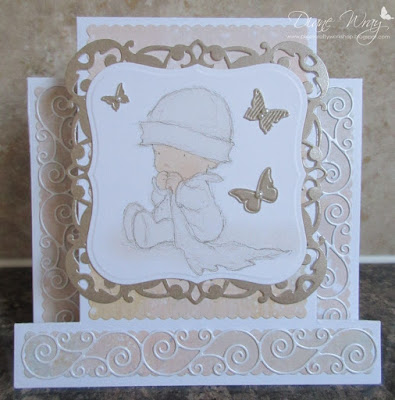 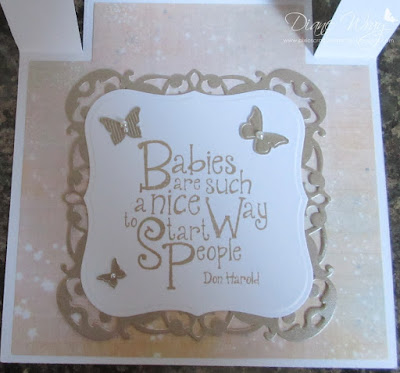 - the baby image is a pre-coloured one from LOTV which I've had for ages, die cut using a Spellbinders 'Labels One' die

- the image was then mounted onto a backing of a pale mink coloured pearlescent card snippet, die cut using a Spellbinders 'Luscious Labels One' die

- to the front patterned paper strips I then added 'Valencia Border' swirls, die cut from white pearlescent card (thank Kath for enabling me!) plus three butterflies die cut from a snippet of the mink coloured card using SU's Embosslits 'Beautiful Wings'. Just added a few white pearls to the butterflies to finish off

- the inside had a sentiment added using Memento 'Toffee Crunch' ink and a stamp from the really useful set called ' Set 61 - Quotables - Celebrate'. It was then die cut and mounted the same as the front, with more butterflies and pearls added

The card was delivered by Len yesterday - and the baby is a little boy. Everyone is recovering well :)

Quick hospital update, a visit which I didn't feel was very helpful. Managed, just, to get shoes on which obviously was good. The outcome for now is basically I have to wait until I have another one or two gout attacks before they'll put me on preventative meds (that cheered me up no end you can imagine!). But, the 'nasties' levels have come down nicely in the (ahem) fluid samples - which in fact IS encouraging. I still say that stopping some other meds that I'd only been on for a few months has been a huge factor in that result! I need to stay on the anti-inflammatories etc. for now due to residual osteoarthritis. I politely refused the offer of a steroid injection into the toe joint - for now at least. When they want someone up there with a paint brush to decorate the ceilings and if it appears to be a last resort then I may take up the offer. I think that's really enough detail - suffice it to say I've bounced back today from feeling quite let down. No other option is there :(

Slipped a bit on commenting in the Playground, oops - and today I should be able to post the last of your prizes off. Most went on Tuesday to those who replied with addresses right away - and some of you in the UK already have received them. Then I needed a few more padded/hard backed envelopes and the last address to post off the final five this afternoon. Yay - marathon over!

Now, where's me pogo stick so I can have a quick bounce around the Playground?!