There is always time for friendship

.....one of my very favourite sentiments and just right for this card, made for someone special: 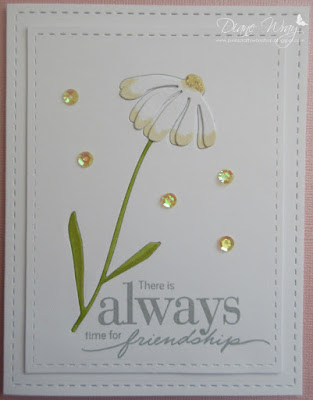 - 5.5" x 4.25" white card blank, made by opening a slightly larger card out and using the largest Lil-inkers 'Stitched Rectangle' die on the front (it only cuts the stitched outline and not the whole piece of card, so you retain the spine) and then trimming the 'open edges' down to size

- a snippet of white card, die cut using the next size down in the Lil'inkers 'Stitched Rectangle' set

- a Penny Black NBUS die called 'Bashful', used to cut out the flower shaped aperture from the snippet of card I'd just die cut in the above step

- I then snipped the head from the second flower I'd coloured, added little strips of narrow red line DST to the back of the petals and head and carefully stuck it on top of the flower head that was already in place - just offsetting it slightly

The die is a real beauty (reminds me of a coneflower) and would also be great used for stencilling - loads of possibilities!

Almost forgot, this is my first entry into Darnell's current NBUS (Never-Been-Used-Schtuff) challenge #5 - loads of prizes to be won, and most of all it encourages you to play with your new goodies that could be feeling a bit neglected.