And yet another week flew past, we're almost into Autumn here in the UK, but with some lovely sunny days thrown in still. But, I just bet the shops will be full of Christmas stuff before long - if they aren't already!

Last Saturday one of my bestest friends from schooldays had a Birthday. I'd been saving the NBUS stamps and dies I used for her card for a few weeks, ready to make a snippets card this week: 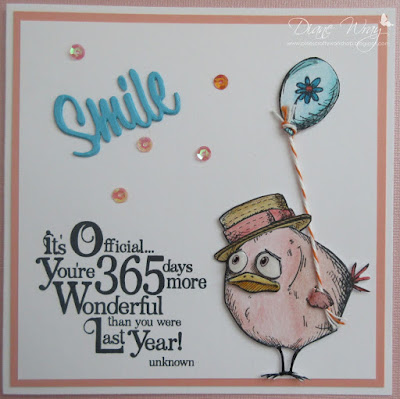 - a piece of SU's 'Crisp Cantaloupe' card stock as a 'frame'

- snippets of white card stock for stamping on

- then I set to using the fabulous Tim Holtz 'Bird Crazy' stamp set as well as the Tim Holtz 'Crazy Things' stamp set. First I stamped the images I wanted onto the white snippets and then coloured them using Faber-Castell Polychromos pencils and Sansodor blending solution

- next I die cut the Crazy Bird using the matching thinlets die set, and fussy cut the 'Crazy Things' hat and balloon. Apparently there will be matching dies coming out for the Crazy Things stamps (late September I believe) but fussy cutting was no hardship

- to assemble the card front I first stamped the sentiment using Memento 'Tuxedo Black' ink and a stamp from LOTV's 'Set 61- Quotable' stamps, which seemed to fit the bill (snigger) perfectly

- next trimmed out the centre and added the hat to the little bird then popped it onto the card front using thin sticky pads. Did the same with the eyes and beak

- added the word 'Smile' and a few sparkly sequins

- finally, when the card was ready to be put safely to one side, I added 'Glossy Accents' to the beak, eyes and some touches on the balloon

This was such a fun card to make - gotta love those Crazy Birds :) Hope you had a great day Moira!

I'd like to make this my second entry into Darnell's current NBUS challenge - all the Crazy Birds stamps, dies - and their accessories were unopened and unused before I made this card. Do join in the fun - there are loads of lovely prizes to be won and of course you get to use some of that NBUS stuff you haven't played with before!

Straight onto this week's picks, which of course were chosen by Sarn - who did a fabulous job of commenting and looking after the Playground this week. There were times I thought it was a bit like her having to herd cats. Thank so soooo much Sarn!

And here's what Sarn says about her time as Playground Prefect: Can I just say it's been great fun being Prefect this week and thanks to the playmates for being such good sports and playing tag nicely (apart from the donkey tail pinning incident of course!). If anyone else fancies being Prefect for a week, I know Di would love to hear from you.

And now for Sarn's picks and why she picked them, in her own words: 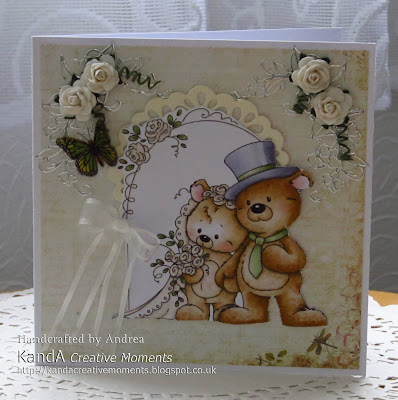 20: KandA HERE. Because I think it's a cute card, beautifully coloured and toned in and prettily embellished. 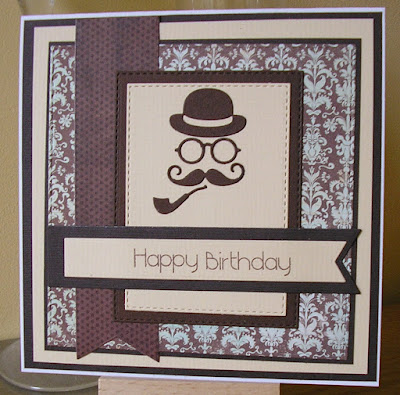 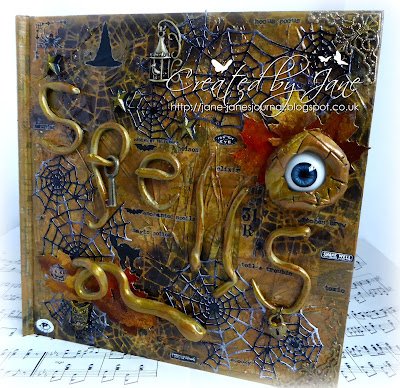 46: Jane's Journal HERE. It's just so amazing with all the work that's gone into it and NO stamping allowed! 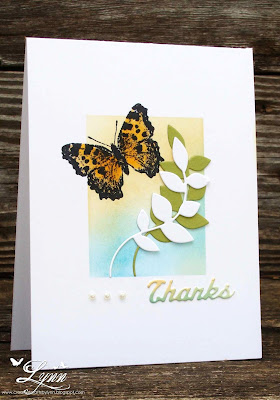 56: Lynn Hayes HERE. Love the multi-inked square butterfly flying outside of it, plus the matching die cut sentiment. The layout is so pleasing to the eye. 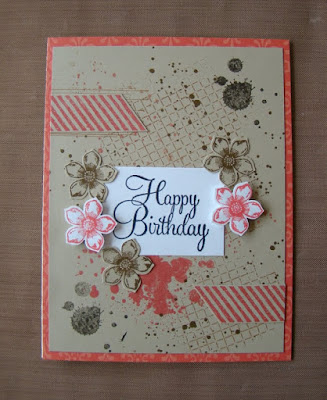 No 67: K T Krafts (Kathy). . .HERE. I just HAVE to add this card to my picks . . . because it is right up my street and uses my fave stamp set. (This was a really last minute addition from Sarn at 10am yesterday morning - which shows just how much we try to keep the picks absolutely up to date, until the very end stop when those gates clang shut each week).

Keeping up to date is also the reason why I pick the previous week's winner right away as soon as the gates close - I know (and totally understand why) a good few challenge work a week behind. But, it's fun to wrap one week up properly before moving onto the next one.

Sarn also said: Oh my goodness it is SOOO difficult picking out cards as they all have their merits.

Thank you so much again Sarn, wonderful picks although I do so agree about choices being so difficult! It's been a huge help having you on board this past week, especially as there's been a lot going on here.

No new little Playmates this week, but we still had 68 entries - am gonna need to get more swings etc. before long!

Now the draw for that lovely stamp set, so kindly offered by Sarn - Woodware's 'Delicate Daisies' - and the winner is:

KandA (Andrea)
Well done Andrea, I have your address and will let Sarn know as the prize will be sent to you directly by her. Isn't it strange, the last prize you won here was the set of Sarntangles stamps, some time ago now - maybe Sarn is a good luck talisman/rabbit's foot?

One reason why this past week has been busy is that yesterday was my Birthday so Len took me out for a day at Longleat on Friday. We had a great day, the weather was so kind to us and with a heat patch on my back, rattling with pills and also a cushion for the 'off the road' ranger tour in a Land Rover around the Safari Park I coped pretty well. The tickets were bought a while ago and the date had been booked so we had to go through with it. We did laugh, after all the bouncing round in the Land Rover I felt my back for the heated stick on pad - and it had slid down into my knickers - wondered why my bum was so warm!

A HUGE thank you to everyone who sent me cards, Facebook messages etc. - I will thank you all individually but my time at the laptop is still being limited.

Anyhow, to celebrate my Birthday I planned a bigger prize than usual for this coming week as a thank you for all the fun and laughter - plus your fabulous snippets makes of course! 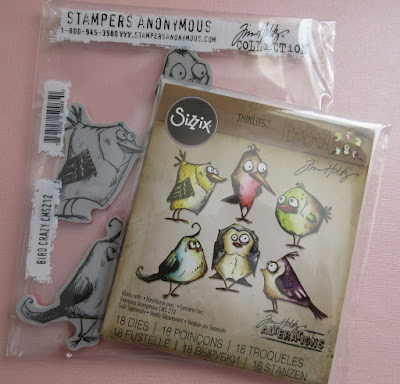 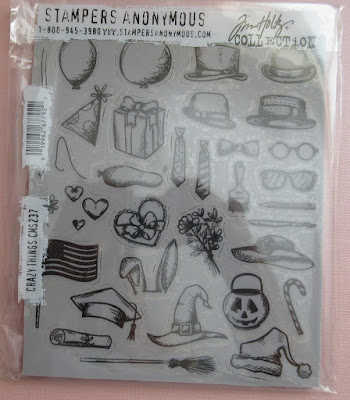 Yup, the prize is the Bird Crazy stamps and die set plus the accessories set that I used for my snippets card today. Not my own ones you understand - these are new and unopened of course!

Ideally, this should all be one prize, so that's what the offer is - all three items. BUT, I've been sitting on this prize for a few weeks now, fretting watching quietly as more and more of you succumbed to the 'Crazy Birds' and there was nothing I could do but hang on.

But, if you already have all of this prize, we have tons of lovely prizes coming up in coming weeks and I know hope that they're just the icing on the cake really.

Now, maybe you only have some of the prize and would like (say) the accessories and/or the dies 's cos perhaps you already just have the birdies or maybe you just have the dies only (err, who would do that?). It's absolutely fine to pick and choose - please just say clearly in a comment which you would like to win - remember you can have all three items as they are a bundle first and foremost, but I will split them if you want to add to your TH Bird Crazy stuff and you get picked as a winner. It might even be that someone would only want the bird stamps, to have a play with and that's fine too. First out gets their choice and then if necessary I'd just keep re-running the random number generator for second/third prizes.

The Snippets Challenge will run for one week and the Playground gates will close at 11am UK time on Saturday 19th September. The gates will open again at midnight UK time on the same day.

Maximum of three entries and please say in a comment if you wish to play and be a possible winner of the prize. Or, as explained above - just one or two parts of it! Do remember that you should also link back to the Playground in your blog post to be eligible for the draw.