Another little neighbour had his 2nd birthday during this past week - it's Max's little brother Charlie this time. I'd asked his Mum what Charlie liked, having made the excavator card the other week for Max, and amongst Charlie's favourites things are trains - so a train it was! And this is my snippets card for the week, every single scrap of card came from the snippets folder too: 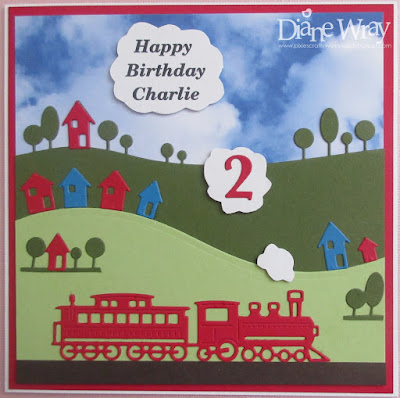 - snippet of 'cloudy sky' backing card, made by Kanban and bought ages ago, stuck over the 'Real Red' layer

- snippet of SU 'Certainly Celery' card stock, die cut using a Spellbinders 'A2 Curved Borders One' die, trimmed down to fit and then stuck over the 'Mossy Meadow' layer

- snippets of red and blue card stock and Memory Box 'Tiny Village' die set, which was a present from ScrappyMo,  added these to the hillsides

- snippet of SU 'Real Red', die cut using a Cheery Lynn 'Choo Choo' train die - which was then stuck along the top edge of the brown strip. I was quite concerned that the die cut might not be too easy to remove from the die itself - but it worked like a dream without any need for waxed paper and all the little windows etc. popped out beautifully

- also die cut more of the 'Landscape Border' just to fill in here and there on the 'Certainly Celery' Layer, along with a further little house

And moving swiftly onto this week's picks: 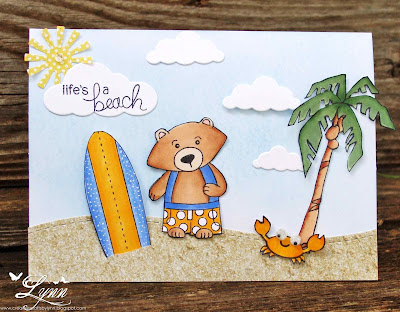 This was immediately going to be a pick of the week, brought to the Playground by Lynn (Jimlynn). A brilliant card, such a cleverly made scene (get the crab's eyes!) - and I love how the darling bear (possibly Parsnip with a suntan!) 'planted' his surf board in the sand :)

But, even just as important is that fact that our much loved Playmate Lynn found the time to make and blog this card. I posted here a little while back that Jim (Lynn's husband) had a stroke and I know that so many of you pitched in to send cards, keep Jim and Lynn in your thoughts and prayers. Well folks, Jim is coming along nicely - certainly out of hospital and I think also home from rehab. Your positive thoughts are still needed please - and even though Lynn is obviously shorter on free time right now to blog hop and comment in return - I bet she'd appreciate a little hello from you. AND, if you do hop over - please peek at this card too - I loved it straight away, but then rolled round laughing at the irony of the sentiment combined with the 'little blue bird of happiness' - I've never seen such a perturbed/disturbed expression on a bird! :) Lynn's sense of humour is still the tops! 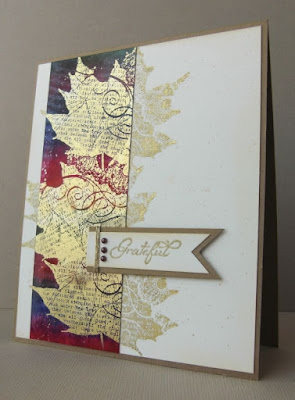 Isn't this a fabulously rich and beautiful card? Made by Greta and I just think it's gorgeous - wonderful gold stamping on the brayered background. Perfection - there's just something so luxurious about it! 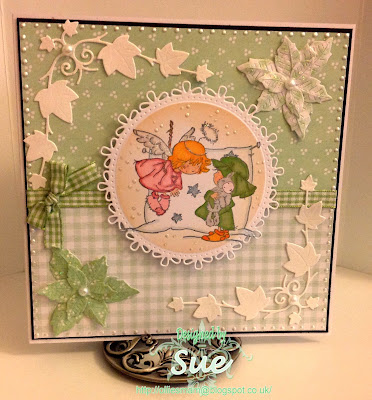 Sue J hopped into the Playground three times this week, each time with a potential pick of the week - but I stuck to my original choice in the end. Plenty of snippets and little details such as the 'poinsettias' being made from the alternate background papers really added to this already lovely card - and of course that LOTV image is one of my all-time favourites. I always giggle over the wee angel's dingly, dangly socks hanging from her feet :) Sue is someone else who's been in the wars, now almost recovered from what sounds like spectacular acrobatics over Woody, one of her pooches :(

The next couple of cards were brought to us by Playmates who are regular picks of the week - but there's absolutely no way I want you to miss these makes! 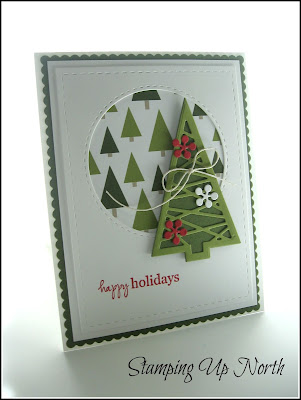 Laurie blew me away with this card, everything about it is just so 'right'. See how the backing paper goes so well with the snippets tree? It's in the Merry Monday challenge link ups too and must be a winner for sure! 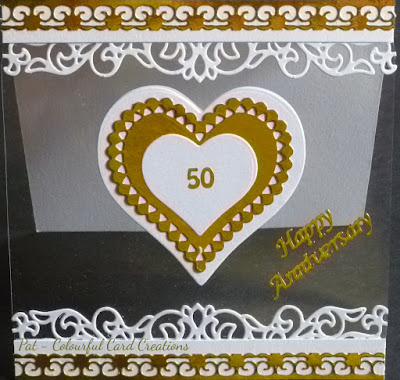 Pat is another one of our regular picks, and there was just no way this fantastic Golden Wedding Anniversary card wasn't going to be shown here.The front of the card is acetate, a super idea - and Pat carefully backed the heart etc. so that it looked perfect from the inside as well! 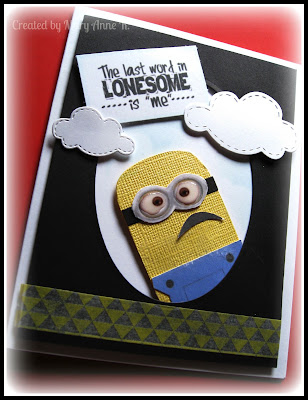 Minions really are taking the World by storm right now - and Mary Anne brought us this really great little chap to show - so clever! I keep thinking I should knuckle down and make a Minions card - there are lots of tutorials out there to follow :) 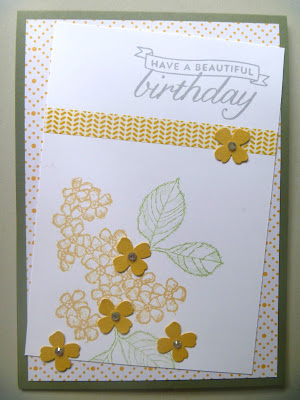 This is such a pretty card, made by April. I love the colours and also the jaunty placement of the top layer. I did grin, April apparently 'pinched' some snippets from a friend for the flowers - I've offered to post her a box full of mine if she likes :) 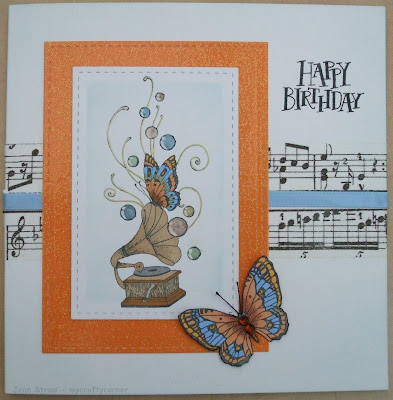 I just love this card, made by Jean! So wonderful how the colours of the background ribbon and the orange layer are perfectly matched to the colouring of the image and that gorgeous butterfly. Which, has some clever touches added by Jean - nip over and read about the antennae!

Time is zipping by (writing this on Saturday morning), a very generous neighbour who goes fishing called by with some fish for us and I ended up standing chatting to him for quite a while! My fish pie is on the menu this week now - if I remember I'll jot down the way I make it, take a photo and post it on here sometime soon. It's ages since I posted a recipe on the blog! Too busy cooking up a storm with snippets I suspect :)

Best press on with our three new Playmates now, and two of them are the grand children of our Playmates - start 'em young: 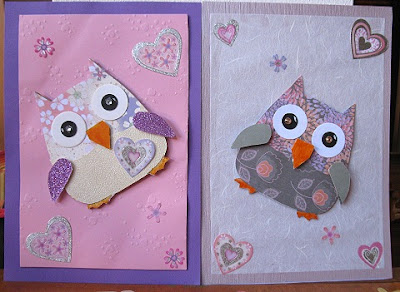 These really cute cards were made by ScrAPamondo's nine year old niece - aren't they just adorable? I love the patchwork look to those owls :) And I found out that the little crafter is called Aurora - what a beautiful name! 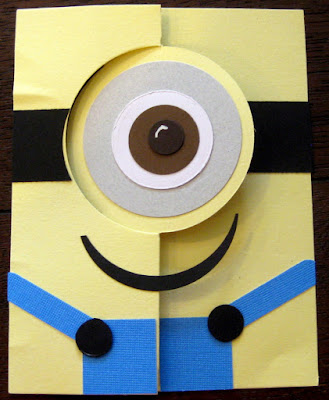 Nate, who is the grand son of Karen (Hasheck) made this terrific Minion card (told you they're popular!) for his - as yet unborn - new cousin. So talented of Nate to make the card in such a clever shape too! I think, but am not 100% sure, that it's also Karen's first trip into the Playground - hope to see you again soon Karen! 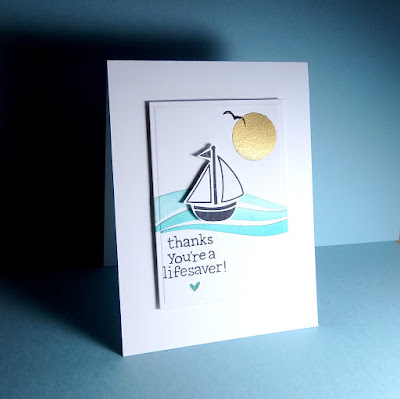 Jenni hopped in waving this totally stunning card - another entry which literally brought me up with a start this week! It's just perfection isn't it?! And you truly have to hop over to Jenni's and read her funny comment after her hubby asked what sort of person would she send a card to with the lifesaver sentiment on. I giggled for ages over it! And, whilst there, do check out her cards - some wonderful inspiration to be found - so we hope you'll be back to play with us regularly Jenni!

Now for the prize draw, the Woodware 'Jigsaw' and 'House' punches if you remember, and I do so wish I had loads of them to give away as many of you thought they would be such fun to win. But, with only one winner, this is who popped out of the Randon Number Generator:

Helen
And it just shows how random Mr Random is - Helen only began playing with us at the beginning of August (although she did play when Jules was running the snippets challenge) so a nice quick win there kid! Can you please drop me an email with your address and I'll post the punches off to you this week (di_wray@hotmail.com).

And this coming week's prize is: 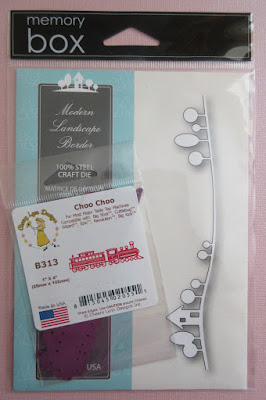 Yup, it's linked to my snippets card (as is the case when I can manage it) and this time it's a couple of dies the same as I used for little Charlie's card, a Cheery Lynn 'Choo Choo' train die and also a Memory Box 'Modern Landscape' die (which is so, so useful for many cards - fabulous for Christmas backgrounds of course!).

The Snippets Challenge will run for one week and the Playground gates will close at 11am UK time on Saturday 29th August. The gates will open again at midnight UK time on the same day.

Maximum of three entries and please say in a comment if you wish to play and be a possible winner of the prize. Also, if you already have one of the dies or aren't really interested in winning both of them but still would like to play for just the one - please say so and if your number is picked as the winner then I'll do a second draw for the other die.

And do remember, it's Rudolph Day this week - starts on Tuesday 25th and runs to the end of the month - over at ScrappyMo's, and there's a lovely Memory Box 'Stitched Holly Leaves' die as a prize. I'll be playing as usual - why not combine a snippets card with a Christmas card for Rudolph Day (whisper, after this one there's only three more until the real thing!).