A pastel Christmas card with two of something

Oh I do like it when I can combine more than one challenge with the same card. Earlier this week I made the card below for Craftyhazelnut's Christmas Challenge #240 'Two of Something' (my two are the snowflake 'toppers' I made, plus two words in the sentiment). And, I'd already checked out Merry Monday's #168 theme for the fortnight and it's 'Pastels'. So off I went with a happy smile and this was the result: 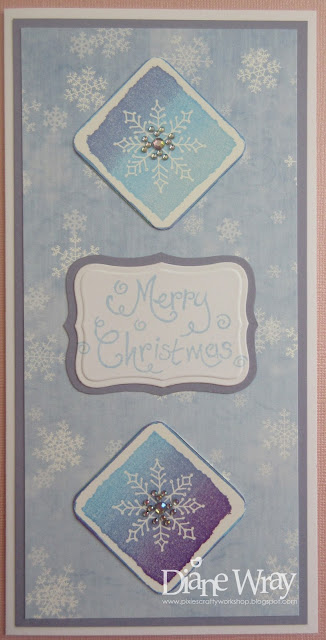 - the sentiment was stamped using Memento Dye ink pad called 'Summer Sky', the wooden stamp I used is a great favourite of mine called 'FRH003 Merry Christmas', made by Woodware

- die cut the sentiment using a Spellbinders Labels Eight die and backed it with a layer of SU's 'Wisteria Wonder', cut into shape by drawing round the outside of the die and then fussy cutting

- then, with everything prepared, I just assembled the whole card in one fell swoop using Collall All Purpose glue - to help with the positioning of the toppers and sentiment I used a ruler and a soft pencil to mark gently alongside where they should be placed

- as always, I just had to add a little finishing touch - two sparkly aurora borealis snowflakes in the centre of each snowflake topper :) And the card is still thin enough to go at Standard Letter Rate - yay!!

I know I've said this before, but the reason I very rarely put a Penny Black Stickeroo directly onto a card is because they're almost, if not totally, impossible to remove once they hit the backing card. My aim isn't the greatest so, for me, it's much better to mount them onto some backing and then trim them down. The exceptions are if I'm using (say) the hedgie or frog ones to build up a little scene.

And of course, I'd also like to enter this into Craftyhazelnut's Christmas Challenge for August, where it's always 'Anything Goes'.

And, with Sarah's encouragement, I'm also entering this into Christmas Cards All Year 'Round for August, where the challenge is 'Snowflakes'. Think I ticked the box there :)